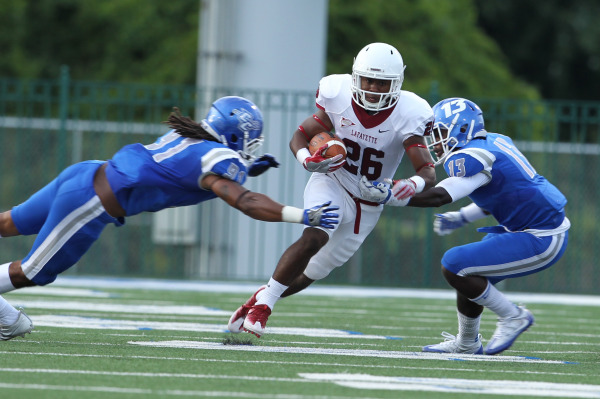 For the first time since 2012 the Lafayette football team has won its season opener.

The defensive corps forced five turnovers and senior QB Drew Reed threw for 316 yards and three touchdowns to lead the Leopards to a 24-10 victory over Central Connecticut State.

Uncharacteristic for a season opener, the team played what head coach Frank Tavani called a “clean operation”: committing no pre-snap penalties, no interceptions and no turnovers.

Senior QB Drew Reed backed up his claim to the starting job by completing 31 of 42 passes and connecting with junior WR Matt Mrazek for all three of Lafayette’s touchdowns. This was the third 300-yard game of Reed’s career.

The Leopards jumped ahead 10-0 in the first quarter off the first Reed to Mrazek touchdown and a 35-yard field goal from sophomore Jacob Bissell, which both resulted from Central Connecticut State turnovers.

The second and third quarters were a little rocky for Lafayette. Following a Central Connecticut State touchdown that was called back on a holding penalty, the Blue Devils finally hit the scoresheet with a 43-yard field goal in the second quarter. They eventually tied it up at 10-10 with 3:06 left in the third.

“I went up and down that sideline and told everyone ‘Hey, here and now you’re going to find out how much you really want to win and what we’re made of,'” Tavani said.

The Leopards had an answer. In the final quarter, the Reed-Mrazek touchdown show took over with 21 and 15 yard scores that allowed Lafayette to pull away for a 24-10 win. Mrazek had 93 yards on six catches and showed why he was the team’s Wide Receiver MVP last year despite missing the last three and half games due to a collarbone injury.

Solid outings by Reed and Mrazek highlight the imbalance between Lafayette’s run and pass games against the Blue Devils. With the increasing coverage Mrazek is bound to attract after pulling down all three of the Leopards’ touchdowns, working on developing the run game will be key for Tavani’s team.

Following the team’s first win since Sept. 26 of last year, a common theme amongst players has been the sense of confidence this win gives them as the team prepares for their home opener against Delaware.

“Coming off a win gives us great confidence,” senior defensive tackle Robin Cepeda said. “Last year, losing 10 games, it was kinda hard going week to week and building confidence…but Delaware is just a new week so we have to forget about our win last week and focus on this week.”

The Blue Hens are coming off a 56-14 trouncing of Delaware State, but their match up last year with Lafayette was a close one with Delaware winning at home 19-9 in the pouring rain.  Delaware plays in one of the strongest FCS conferences, so despite their seventh place preseason ranking they are still a tough team to beat.

“There’s a lot of great energy,” junior tight end Dylan Wadsworth said. “It’s fun, winning is fun. We prepare so hard, to get that first win it’s a great way to get the season rolling. I think this week we’ll have a lot of energy and excitement to hopefully continue with our winning ways.”