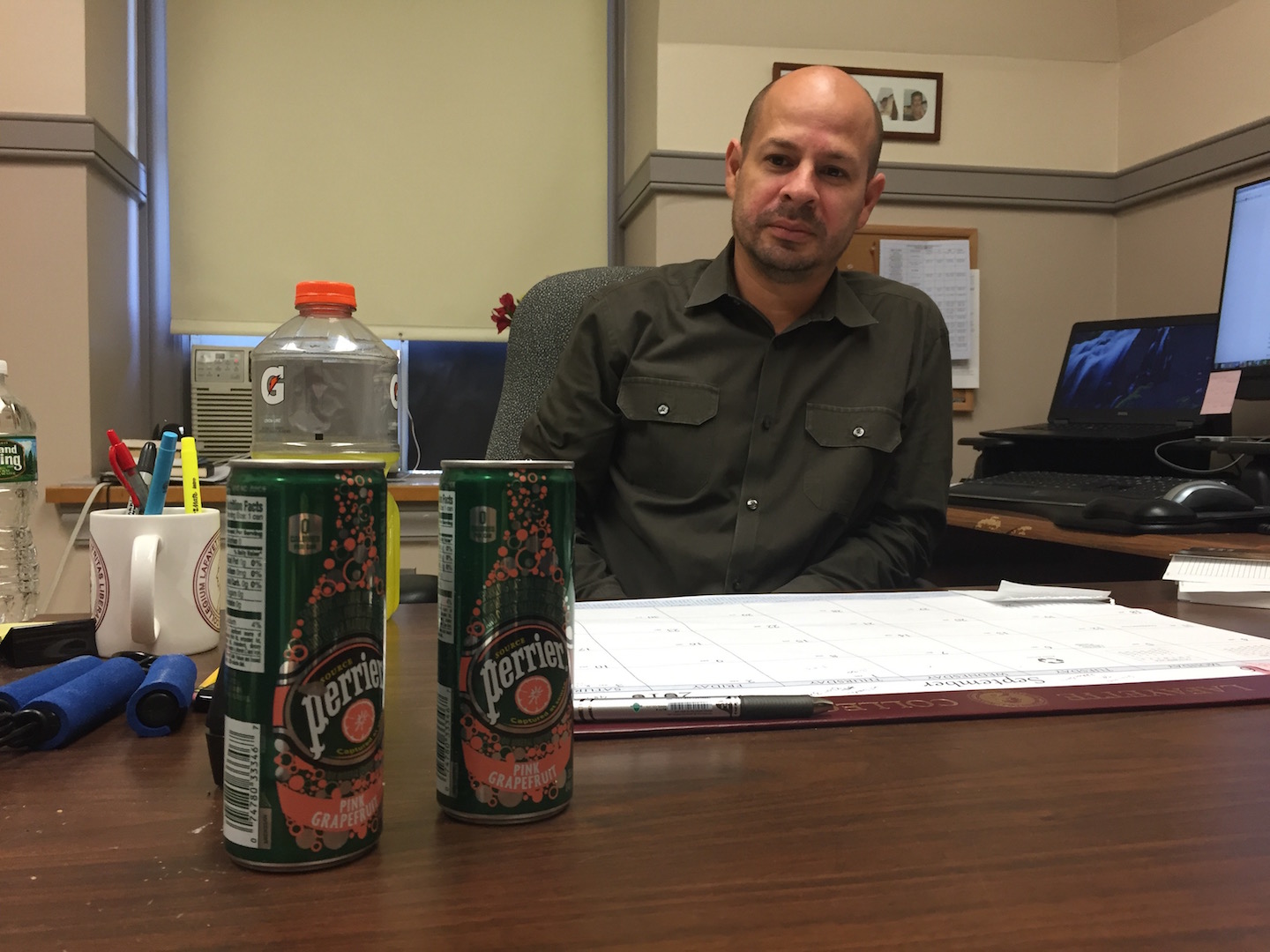 Professor Juan Rojo – on hunger strike and only consuming drinks – was given two drinks by President Alison Byerly, who signed off to deny him tenure. (Ian Morse ’17)

President Alison Byerly and Spanish Professor Juan Rojo met face-to-face for the first time on Thursday night regarding Rojo’s hunger strike in response to the denial of his tenure application.

Rojo, as of Friday morning, has only consumed water and sports drinks since the announcement of his hunger strike on Tuesday afternoon. Byerly addressed the college community about the matter in an email sent to the campus mailing list on Thursday afternoon.

Spokesman for the college Roger Clow wrote in an email that Byerly and dean of the faculty Robin Rinehart met with Rojo and two colleagues Thursday night to “express concern for his health and to give him an opportunity to further share the views he expressed in the statement he read at the faculty meeting on Tuesday.”

Rojo described what was discussed in the hour-long meeting in his office as “unsurprising” but “productive.”

According to Rojo, “flaws” in the tenure review process was the only agreement between the five of them.

“I think it’s progressing but right now, we met with the president yesterday, and the president made clear that this is no longer a decision that is in her hands,” Rojo said. “It’s in the board’s.”

Byerly wrote in an email that she had nothing to add to Clow’s statement.

Rojo’s first demand requested the board of trustees – the sole body capable of granting tenure – uphold the 6-0 faculty vote and 6-1 Promotion, Tenure and Review (PTR) committee vote to give Rojo tenure. Before Rojo’s tenure application went to the board, Byerly vetoed the previous votes due to a lack of “distinction in teaching” based on student evaluations.

His second demand is for the implementation of systematic changes to the tenure review process, like defining the “compelling reasons” for why a president can veto the PTR committee’s decision.

The faculty governance committee meeting will be held at 3:30 p.m. today in Kunkel 215. Because there is a lot of interest in the discussion, the meeting may be moving to Kunkel 117.

It is unclear whether or not Rojo plans to attend.

Root added that although the urgency of the meeting is due to Rojo’s hunger strike, but the discussions in the meeting will be about the procedure of granting tenure and not Rojo’s case.

“As I mentioned at the faculty meeting on Tuesday, Professors Geoffrion-Vinci, Germanoski, and I, requested in a letter sent on August 17 that the Governance Committee in consultation with PTR evaluate for possible revision the section of the Faculty Handbook that addresses what happens when the President and PTR disagree,” Byerly wrote in her campus-wide email.

The last time this part of the tenure review process has been considered for revision was 1999, she wrote. According to Provost Abu Rizvi, it has been 13 years since a tenure application was vetoed by a president at the college.

Rojo said he had no knowledge of the letter Byerly sent on Aug. 17 prior to his decision to go on a hunger strike.

Since The Lafayette broke the story on Tuesday night, Rojo’s hunger strike has received national attention.

“I want to affirm the rights of members of our community to express dissent,” Byerly wrote at the end of the campus-wide email. “As an educational community, we value the opportunities for dialogue that differing views allow.”

There was a meeting last night of roughly 25 to 50 faculty and staff members to discuss how to react to Rojo’s strike and the tenure process, according to a member of the faculty who was at the meeting.

According to the faculty member, “several avenues of strategies have been chosen and we’re going to be pursuing these in the next few days.”

“There are interests in reaching out to the president and to the board of express faculty concern and certainly student concern, as well,” the member of the faculty said. “And then we will see what happens.”

“I think there are efforts to see a way out of what is a kind of crisis for the school that has been self-inflicted by the administration,” the source added.

This morning, Rojo said he received an email from a colleague who offered to take over the hunger strike for him on a rotating basis.

“It just broke me,” Rojo said. “I didn’t imagine that anyone would be willing to do anything like that.”

He said the email came from someone who he knows, “but not very closely.”

At the meeting with Byerly Thursday night, Rojo said she gave him two Perrier pink grapefruit drinks. They sit unopened on his office desk.

“I will be glad to drink one with her when this is all done,” he said, referring to the grapefruit drinks. “I have no animus towards her personally.”