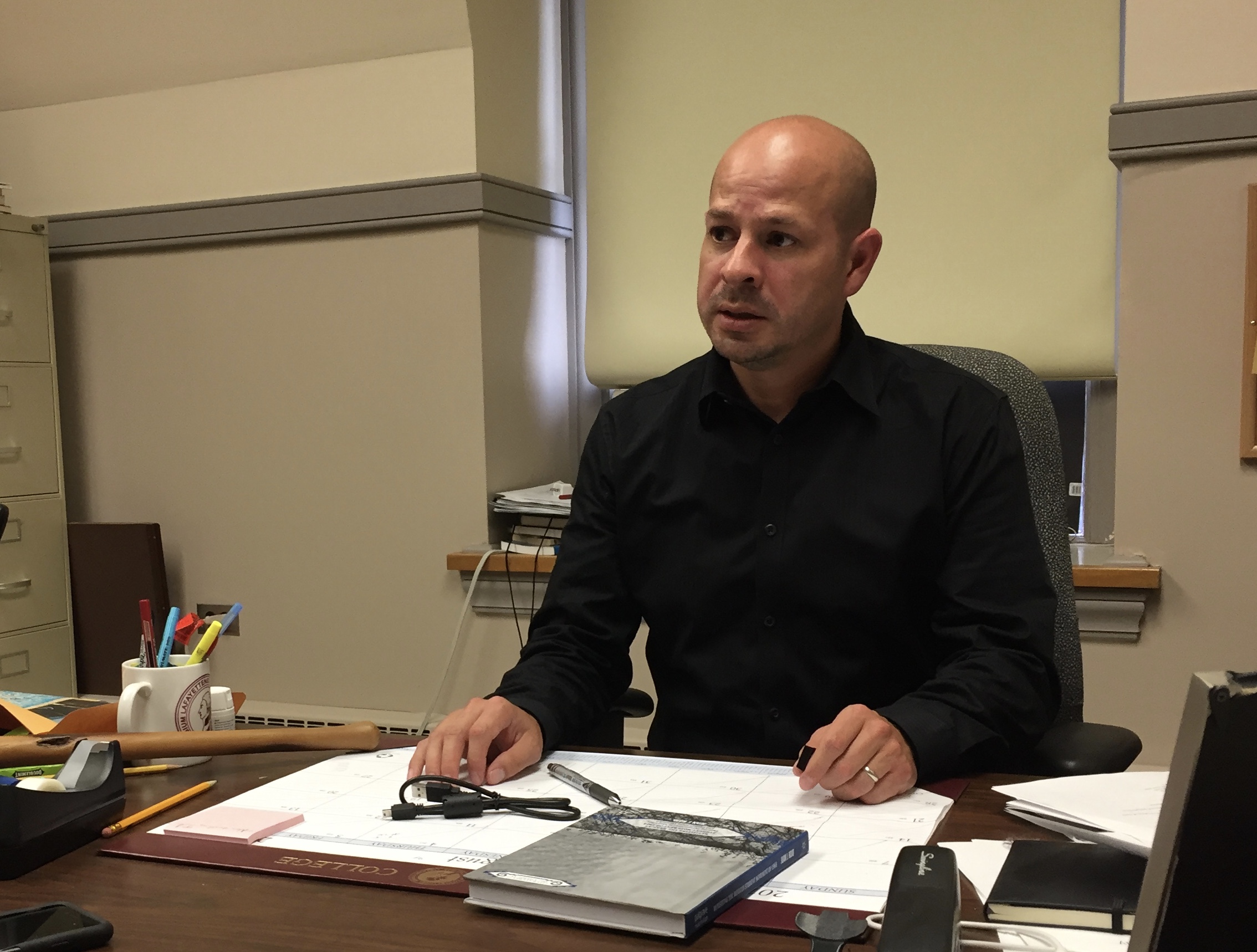 This was a breaking news story and has been updated. Check here for updates.

A Lafayette assistant professor announced today that he is going on a hunger strike to protest President Alison Byerly’s decision to deny him tenure and to protest the tenure review process.

Juan Rojo, who teaches Spanish, began the hunger strike when the first faculty meeting of the academic year began at 4:10 p.m.

At the beginning of the month, he was denied tenure for the second and final time. Rojo said his department voted 6-0 to grant him tenure, after which the Promotion, Tenure and Review (PTR) Committee submitted its 6-1 vote to recommend tenure to Rojo on Dec. 18.

According to documents given to The Lafayette, the decision then went to Byerly, who exercised her power to veto the committee’s decision. Explaining her veto, she wrote Rojo a four-page letter. The PTR committee then responded with a letter supporting Rojo that also included a dissent from the member of the committee who agreed with Byerly.

“It’s a terrible position to be in,” Rojo said. “It’s especially painful when you have done everything you were asked to do, and the faculty are calling and recommending you be tenured, and one person has decided that not be the case – for reasons that the faculty committees have evaluated and found to have no basis.”

Before making the decision to go on hunger strike—for which he said he will only be drinking water and Gatorade—Rojo discussed it with his family and his doctor.

“So I have to decide: Do I choose a career elsewhere? Or do I choose a different career so I can keep my family here?” Rojo said. “I’m baffled why I’m being asked to leave.”

Rojo—who has been teaching at Lafayette since 2008—said that his strike will not be brought up in his classroom.

“This is not what I’m going to be covering in classes,” he said. “I am going to do what I’ve been asked to do, which is teach [the students].”

As part of a speech Rojo wrote to announce his strike to the faculty, he said that he plans to end his hunger strike when he is granted tenure and changes to the tenure review process are implemented.

According to his written statement, “I will end my hunger strike when

“1. The Board of Trustees upholds the Promotion, Tenure, and Review Committee’s decision that I be granted tenure and

“2. The Board of Trustees agrees to accept changes from this body to the Tenure Review process. Specifically, I would propose that deadlines be established after the Promotion, Tenure and Review Committee’s decision is made so that no candidate endures 8 months of doubt. In addition, I would suggest that the term “compelling reasons” be defined to clearly establish the grounds by which a President may overturn the Promotion, Tenure, and Review Committee’s decision.”

This was a breaking news story and has been updated. Check here for the full report.

You go Prof. Rojo. Great professor and you fully deserve your tenure.

By far one of the most influential and inspirational professors I’ve ever had, I was lucky enough to have Professor Rojo twice during my time at Lafayette. With the recent tenure denial of an equally amazing professor, Professor Shelton, I am concerned with the direction of the College. I cannot imagine donating to an institution with the habit of denying tenure to some of its finest professors.

Rojo is laughable and his “hunger strike” is not real. He drinks gatorade! A reasonable person don’t act up like that.

Rojo: You are an adult. Please act like an adult.

This is ridiculous. I had Prof. Rojo when I was a sophomore, and it was an excellent class, with open discussions and debates. He and I often disagreed, but this was a source of great learning for me (and he remained fair to me regardless of my views). I really hope the College reconsiders this decision–it’s embarrassing.

Wow, what a disgrace to the Lafayette Community. He should be removed immediately from the campus. Can you imagine the dangerous precedent it sets if the College reverses their decision? “My professor failed me, so I’m going to go on a hunger strike until the College changes my grades.” This is not the type of behavior our students should be learning. What does this teach our students about how to act when they don’t get a promotion.

I bet you either don’t have a degree, or have attended University. Otherwise, you would understand the unfairness to be denied tenure based on “compelling reasons”. Several of the universities policies on tenured professorship are archaic and not practical, I’m glad someone has finally decided to bring it up to everyones attention.

You’re a Dumbass, and probably a Trump supporter. So an Unintelligent Dumbass, if you will.

Actually. I have 2 degrees in Engineering. One from Lafayette. Glad you resort to name calling if you don’t agree with someone’s opinion. Wait isn’t that a page out of Trump’s book?

Pennsylvania is an at will employment state; I am sure he will be terminated quickly for this stunt.

Says someone you clearly doesn’t know what he’s talking about. You do realise that when you are denied 10 year that you lose your job and you are likely to get hired anywhere else, correct? No, you clearly didn’t know any of that yet had no issues showing your ignorance here.

I hope that the Board of Trustees and President Byerly seriously consider Professor Rojo’s requests. Lafayette should show more support to their faculty – especially faculty of color – and must stop silencing their voices.

It is a shame that the corporatization of Lafayette interfere with the career of successful faculty members who bring prestige to the college.

As a grad in the class of 2010 I heard that Prof. Rojo was always consistently good at teaching and developing students’ potential. I never had him myself but I hope this gets resolved before more damage is done to him or the president’s reputation. I don’t think this denial benefits the school in any real way and seems to be hurting the impressions of school leadership.

Fire him or let him starve. He says he is doing this for his family, that’s just not the case…

Being a good teacher does not entitle one to tenure.

After reading reading this story, it made me so hungry I made two delicious cheese and tomato sandwiches. Hey Juan, you want some?

I still don’t know what the basis for denying him tenure was. Evidently the Preident’s four page letter likewise didn’t clarify what her “compelling reasons” were.

Sounds like presidential over-reach. If the faculty, by a very large majority deem him fit, then that should be an end of it. The President and the Board would kick in if there were financial exigency for the school or program eliminations and reorganization (all very disturbing anyway) in the offing. But how could he President be making an academic decision when her academic officers (the faculty) are in support of Professor Rojo?

In an era when students are going into debt bondage just to be able to enter the job market, colleges and universities have become more responsive to the students footing the bills. Lafayette’s tuition for ONE year is $48,450 (according to your website). Add in housing and other fees and you end up with $64,105. Over a four year period, this cost reaches over $256,000: that’s more than many people pay for homes. In fact, I could buy this home in the Southeastern PA suburbs for less than the cost of 4 years tuition at Lafayette:

Since parents bear a lot of these costs, I will speak as a parent. If my son or daughter attended Lafayette I would expect the very best in teaching quality. I would not want a second rate or inconsistent professor, no less a poor one. Teaching is a skill and an art, and not everyone can do it well. A very expensive teaching college should have the best faculty possible.

Mr. Rojo, unfortunately, seems to be an inconsistent professor if one looks at Rate My Professors.com:
http://www.ratemyprofessors.com/ShowRatings.jsp?tid=1229944

No, RMP is not scientific nor representative of all of the students. However, it does give certain indications. First, Mr. Rojo received worse ratings after 2012 than before. He received (in general) worse ratings in upper level courses than lower level ones. This indicates that Mr. Rojo’s overall teaching was not necessarily improving (as he has claimed) but, at best, was staying consistent. This also indicates that Mr. Rojo may not be very good at teaching majors in his field, but may do better with lower level non-majors. Since courses for non-majors can be filled with adjunct labor, this is not the best reason for keeping him.

Finally, RMP indicates that Mr. Rojo was both disorganized and inconsistent. He could go from “easygoing” to “(unpleasantly) strict” on a dime. Disorganization and rapid mood swings create instability in the classroom and frustration for students. This kind of personality type is not the best exemplar for teaching practice by any stretch of the imagination.

In a research or large state university, Mr. Rojo could exhibit such behaviors and still get tenure based on his publication record. In a lower cost university, Mr. Rojo’s hiring could be justified in a number of ways. But in a very expensive college dedicated to teaching, Mr. Rojo is not the best applicant out there, nor the best fit. He might be more comfortable at Cal State Northridge, where the classroom standards are not so exacting and the costs not so dear ($3,291 per semester).

Under the circumstances, Mr. Rojo’s hunger strike is inappropriate and unfortunate. He has had ample time to actually improve his teaching and to seek some kind of counseling for his personality and organization issues. For whatever reason, he is not able to come up to Lafayette’s high standards, worthy of a house mortgage in tuition. He needs to find another place and let a better, more highly skilled teacher take his place.