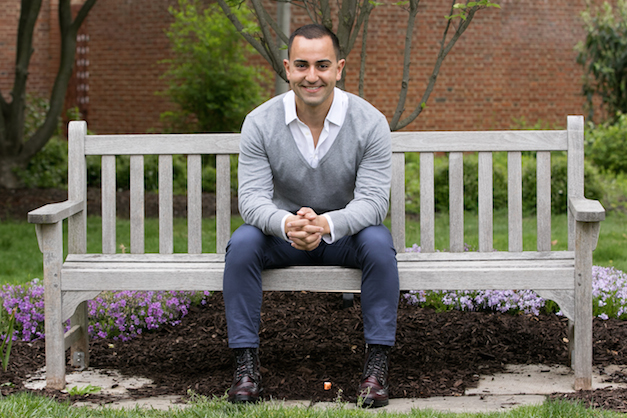 At 22 years old, Guilherme Ferreira de Avila left his former university to come to Lafayette. He put his two-and-a-half-year education at Brazil’s most prestigious international relations academy on hold while he waited for his acceptance letter. But the time ran out—the hold he put on his degree expired. For that month, de Avila said he “had no ground to stand on.”

Now, he’s the recipient of Lafayette’s most prestigious award, the George Wharton Pepper Prize, for best representing the “Lafayette ideal,” and he credits his willingness to try new things to his success at Lafayette.

de Avila said he has never been afraid of opening himself up to new experiences. At 12 years old, he approached the chairman of an international exchange program, but he was denied because he was too young. He ended up attending the program at 14. Later, de Avila spent one winter in Argentina to improve his Spanish and another at Disney World as a multilingual host.

At Lafayette, de Avila majored in economics and took art and architecture classes on the side. In his freshman year, he did Excel research in econometrics, which he had not yet taken as a class. As an openly gay student, he was the chair of Behind Closed Doors (BCD), a private, student-only space for students questioning their sexual identity and as the president of Economic Empowerment Global Learning Project (EEGLP), he helped low-income villages in Honduras become economically self-sufficient.

But he also took time for himself. According to de Avila, it is important to find balance in life. Part of the way he unwinds is by travelling, he said.

de Avila said that he flies at least once a month, but sometimes even more than that. He has visited different places from Hong Kong to all over Europe to Hawaii and he goes home to Brazil to visit his parents about every two months.

But de Avila does not just travel for fun. He has turned his frequent flyer lifestyle into an entrepreneurial exercise. After having multiple people reach out to him asking him how he is able to fly so often, de Avila created a website to help others understand the different structures and inventories involved in flying and how to make the best out of the flights.

Still, his frequent travel does not get between him and his time at Lafayette, de Avila said.

“There’s definitely some compromise, but I think that’s with anything,” he said. “I think it’s all about choices and it’s really how you use your time.”

“All my friends have already either gotten their masters or they’re on their third promotion, you know, and I’m here,” he said.

“I was very happy that my family did not impose anything, because I know that’s not the reality for many people,” de Avila added. “They had so much trust that I was doing the right thing, that I was responsible for myself.”

When he told his father that he won the Pepper Prize, de Avila had to make sure his father was sitting down. He was afraid to excite him because of the heart attack his father had had a few years back.

When his father had bypass surgery after sophomore year, de Avila put a hold on his research. He took the summer off to go back to Brazil and be there his father during surgery and recovery.

At first, de Avila said he worried he may seem unimpressive because of the time he took off. But after talking to alumni from Lafayette, he learned that rather than trying to fit a particular mold, he should leverage his own skills and the aspects that make him unique.

de Avila also credits these “alumni young and old” and the professors he has had at the college with his success.

One of these young alumni is Geraldo Neto ‘15, a former Pepper Prize nominee, who de Avila developed a close relationship with while at Lafayette. Also an international student from Brazil, Neto said he bonded with de Avila because they were from the same hometown.

Neto said that he believes de Avila represents the Lafayette ideal in “many unusual ways.”

“[The pepper prize is] not a prize for the highest GPA—it’s not a prize for someone who just excels in those more obvious ways, but it is really about the person as a whole,” Neto said. “And I think he does embody that for just how open he is…and how passionate he is about the college.”

This year, all of the Pepper Prize nominees will be listed in the commencement program for the first time, President Alison Byerly said. Before the winner was announced, the group met up for dinner to celebrate their respective accomplishments, de Avila said.

“It was one of those things you wish you had done before because it’s such a great group,” de Avila said. “I can think about so many people who should’ve been in my place in the finalists or should’ve won. So the fact that I came to be [the Pepper Prize winner] … I don’t take this lightly. I am very very honored.”