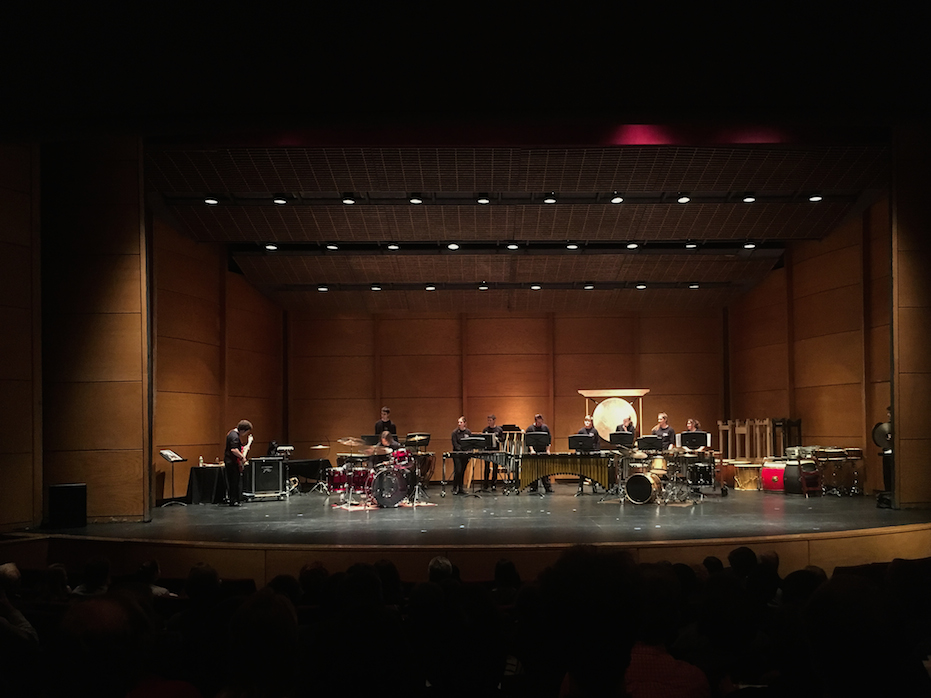 The ambiance in Williams Center can get downright thunderous.

This past Monday evening, the Williams Center for the Arts showcased a group of Lafayette student entertainers. Under the direction of Professor of Music J. Larry Stockton, the Lafayette College Percussion Ensemble performed their final concert.

With the exception of a handful of seats, the house was packed. The concert began with members of the ensemble entering from the lobby, playing on their instruments. Their beat accompanied the musicians on stage. This tune, “Djembe Djam XVI,” featured master drummer, Fabian Rogers ‘17.

After the opening number, the director introduced himself and his students. He set the tone of the evening with lighthearted jokes and a casual, inclusive manner.

The second piece on the program was called, “Me Tarzan” by Lawless. This piece featured a lot of body percussion, as well as tap dancing by another student. The ensemble donned sunglasses during some of the song.

Phil Paek ‘16, an ensemble member, played a solo piece on the janggu drum.

This Korean drum was something he studied for two years, and asked Stockton if he could present before graduating. He played a complicated, intricate piece called, “Hwimori Jangdan.”

At the show, senior members of the ensemble were recognized. Brian Duke ‘16 played a drum solo. He had been focusing specifically on solo drum work this year with Stockton. Later in the program, he played the drums opposite artist in residence Bill Goodwin in “Zing, Zing, Zing.” Joe Cericola ‘16 accompanied them on the guitar.

At one point in the show, Stockton directed each section of the audience to clap a certain rhythm that complimented the musicians’ rhythm stage. At another point, he taught the audience a chant at the beginning of the song. Before every piece began, he would give a brief background history of the instruments being used, the featured musicians and the song itself.

View all posts by Aleni MacKarey →