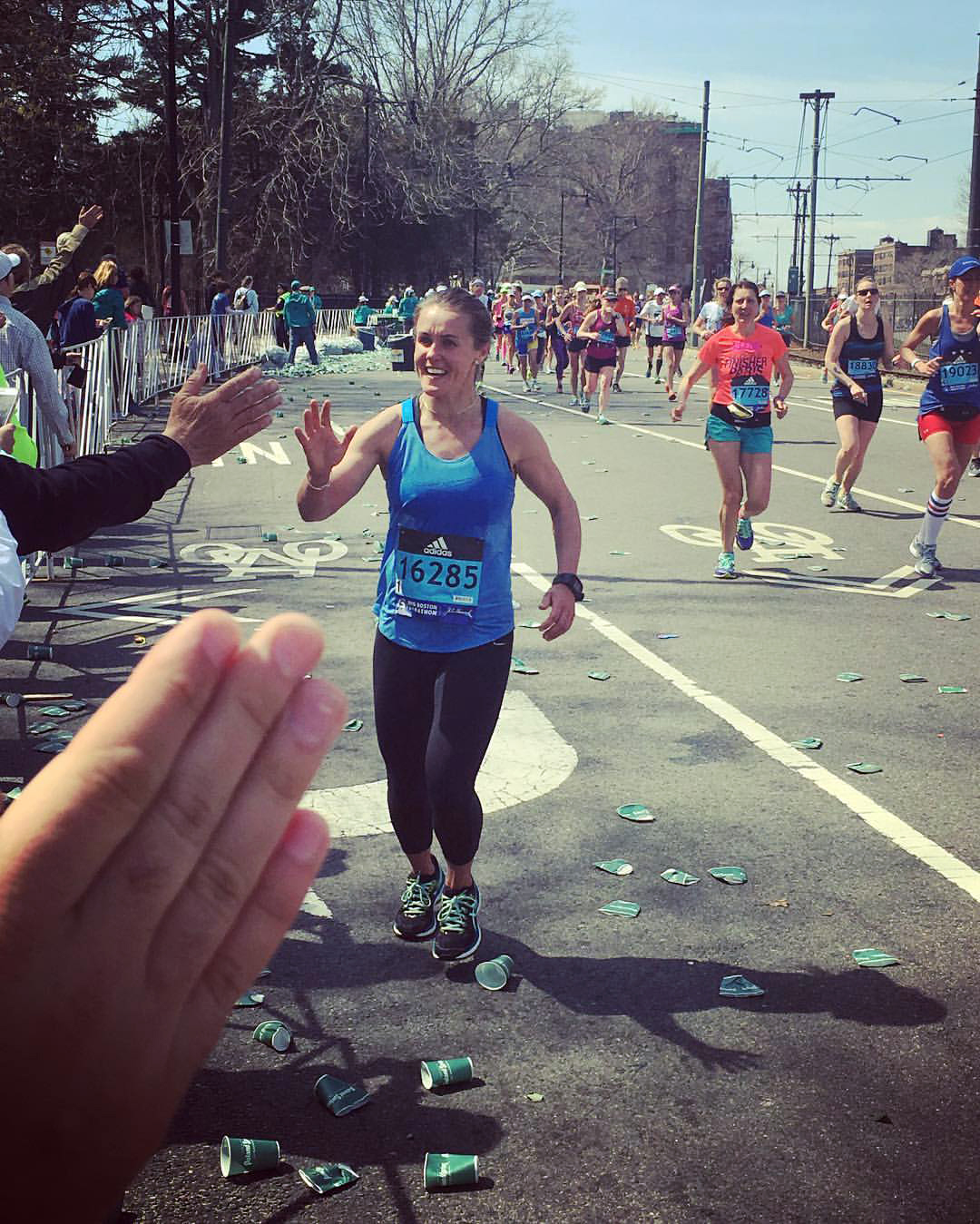 KW: Last week you ran in the Boston Marathon. Talk about your experience.

EJ: Since it’s such a huge day in Boston, there’s tons of support and tons of people around, so it’s just a huge deal. It’s just fun to be a part of. It was a gorgeous sunny day, so that made it a million times nicer. It’s just fun to be around a bunch of others runners who are excited…there’s tons of energy — it was the 50th year that women could run it, so as a girl, that’s pretty cool to be a part of…Overall, just an awesome day.

KW: Are you from Boston?

KW: When did you decide that you wanted to run the Boston Marathon?

EJ: You need to qualify for it, so you need to run a certain time. I decided that would be one of my personal running goals like three years ago. So I qualified for it in Philly three years ago. But I ran the Boston Marathon last year and this year, so this is the second time I’ve run it.

KW: What does your training consist of?

EJ: I started training probably in December. It’s a combo of all different types of running, but also cross-training. I snowboard a lot, so I use that as some cross training, and like hiking. But just a lot of strategically placed long, slow runs and fast runs, and a lot of cross-training, too, so you can lift and everything, and a lot of bikes. Mostly because it’s long, you spend more time doing it. So it’s longer exercises. It’s a good amount of training because you want to make sure you’re ready.

KW: I’ve heard that the downhill parts of the race are the hardest to prepare for?

EJ: It’s the worst part—it’s the worst part. Especially running around here. Around here you can’t go anywhere without running uphill. And you can like trot downhill, but then you get there and you’re like, ‘I want to crush this.’ Your legs are just getting pounded.

KW: Have you ran any other marathons?

KW: What got you interested in running marathons in the first place?

EJ: Just a new challenge. I have a lot of energy, as just a human, so I like running in general…and it’s cool training, you learn a lot about yourself as an athlete.

KW: What time did you finish with?

KW: Do you have any pre-race superstitions?

EJ: I think that’s the problem, I don’t really, and I think I should maybe get a few superstitions to keep myself on track.

KW: Do you plan on running any other marathons in the future?

EJ: Yeah, I’ve got to run one as soon as possible. Just because I think I learned a lot from this last one, but I definitely want to run one in the future…it’s definitely going to go on the calendar. For sure.

KW: How much time is a healthy amount of time to take in between marathons?

EJ: I keep reading a ton of articles, because I’m like, ‘I think I should go do one now.’ And then I’m like, ‘I should probably read about that more before I just go and do it.’ I’ve read that anywhere between like two and eight weeks is fine.

KW: I’ve heard that during training you never actually run the full distance?

EJ: Yeah, the farthest I ran was 22 miles. There’s no need to really, and then you did a good kick from the crowd. Some training plans have you going as high as 28, or 26…but some people say that it’s not necessary. I’ve never done a training plan with the high mileage, so I don’t know, but I just don’t find it extremely necessary.

KW: You’re going into your third season as an assistant coach for Lafayette Field Hockey, what is the 2016 season looking like? What are you most looking forward to?

EJ: Yeah, pretty excited for it. We have a good schedule. I think the girls are leaving here in a good place. I think, I hope. So I’m excited to see how they progress over the summer and if they come in in a good spot. It should be a pretty exciting start. They’ve done a really good job this spring of getting after it and really pushing themselves, so I’m excited to see, in our real season, if they keep going.

KW: What position did you play when you played field hockey?

KW: Was this your first coaching job?

EJ: I used to work in television production in New York City, then I coached in Fairfield [Conn.], and then I came here. So this is my second college job. I coached a high school team, too.

KW: What made you transition from television?

EJ: I just really like coaching and interacting with kids and trying to teach the game…and I like being outside. And hockey is such a cool sport to teach people, and they can just learn so much through playing a sport in college. I really enjoyed my time doing it and I felt I learned a lot from it, so I was like, I’m pretty into this.

KW: What’s your favorite sport other than field hockey?

KW: How long have you been snowboarding?

EJ: Probably since like fifth grade…that’s one of my favorite things to do.

EJ: Really like “Good Will Hunting,” and I’m going to say “Inside Out” then, too, the Disney movie.

EJ: Oh, I love Upper. I’m always down for team meals — before games we can go eat with the team and that is the best part. Definitely Upper.

KW: If there’s one thing most people don’t know about the field hockey team, what is it?

EJ: They have a really good sense of rhythm. They can dance, sing, and I heard them throw together a beat box once. So that was really impressive, I don’t know maybe if they do that when I’m not around. And like one of our freshman can rap really well. They’re very talented in that end.

KW: What is the funniest thing that a coach or player has ever said to you?

EJ: We played an awesome April Fool’s joke this year, so I have to mention that. We did play an awesome joke on this kid — convinced her that she had to wear knee pads for the rest of the season. Knee pads are not a thing in hockey…we called her in for a really serious meetings. And we pulled in our training staff, and it was really good. And she wore them to training. It was really good, that one still gets me.

KW: Name one thing that most people wouldn’t know about you.

EJ: I can eat like a whole package of double stuffed Oreos. I would say these kids here wouldn’t know that I can eat a ton of Oreos.

EJ: “Just get after it.” That would probably be it. Or “be awesome.”