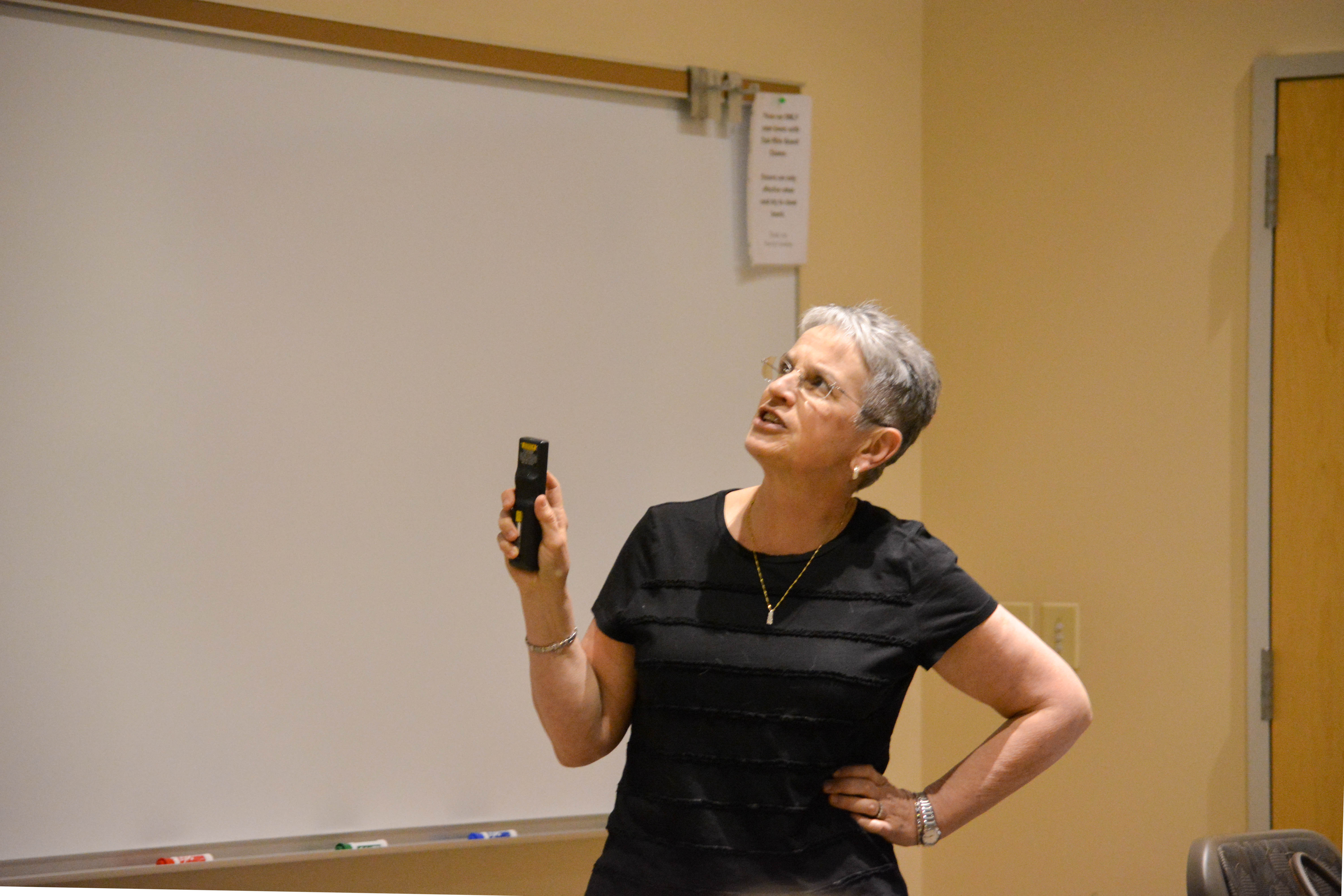 Professor of Economics Rosie Bukics said she doesn’t lecture a lot. But on Wednesday, she gave a “last lecture,” to a room full of students.

It wasn’t Buciks’s final lecture, but rather an annual event three years running at Lafayette, where seniors vote for their favorite professors to give a talk in the final months of school.

Bukics’s lecture was titled “Rosie’s Roadmap to Life,” after a concept she uses to teach her Financial Theories class.

While Bukics may be a favorite at the college, she said that she never anticipated being a teacher. She actually “fell into” her job at Lafayette, she said.

Her humor is one of the things her students appreciate about her, along with her kindness, said Erica Swinton ‘16, who had Bukics for two classes. Swinton was one of six students who invited Bukics to this year’s senior appreciation brunch called “Sincerely, Seniors,” to appreciate her gratitude to Bukics for the lessons she has taught her.

Swinton said that Bukics is one of the hardest teachers she has had at Lafayette, but that her classes have been some of the most rewarding ones she has taken. And even though Bukics is not her advisor, Swinton said Bukics would do anything for her in a heartbeat.

“She will write me grad school application, she’ll write me an application for a scholarship, she sat with me in the room trying to figure out things for my resume—hands down tore it apart, but in all honesty it helped so much,” Swinton said.

Once, Swinton said, Bukics invited her class over and cooked dinner for them.

Bukics said she thought it was funny to think about why students may have voted for her to give the last lecture this year.

“I have a colleague who says to me, ‘You abuse the hell out of them and they still love you,’” Bukics said. “I think why is because I’m always here for them.”

This “abuse” that Bukics is referring to is setting high expectations, Bukics said, which her students meet.

Bukics said her high expectations go back to her childhood. One of nine kids, Bukics was a first generation college student.

“My parents didn’t go to college. So to them, education was the key,” Bukics added. “They wanted to instill the importance of education [in me].”

“We were grounded if we weren’t on high honors,” she said. “You can’t get a higher expectation than that for a kid.”

This led Bukics to work her way through college, which she graduated from in only three years. She was one of five women in the first co-ed class at the University of Scranton. But she said she never felt discriminated against. She never thought of herself as different from any of the men.

“I was a woman on a mission. Get out of Scranton was my mission,” Bukics said.

Now Bukics has traveled to 12 countries and 34 states. Next on her bucket list for all fifty states is Alaska, where she will be going this summer.

But where she hopes to end up is right here at Lafayette. During her lecture, Bukics joked that she is going to “croak in the classroom.” But in private, she revealed her true plans for the future.

“I’m going to volunteer at the college in admissions and in career services,” Bukics said. “That’s my goal is to give my time back to the college.”

Bukics said that her daughters often joked that her priorities went: the college, then her students, then her pugs, then them.

“And my poor husband wasn’t even on the list,” Bukics said.

Her dedication to her students and the school shows in her teaching style. If a class is less than 25 students, she can call them all by name by the end of the second class. She also changes her syllabus every five years to keep up with a changing demographic of students.

Bukics’s most recent change to her syllabus includes a new game in financial theory called “Pepper Drill: To beat balance sheet boredom.” The game is based on the volleyball training drill, called peppering.

“I get ideas from everywhere,” said Bukics, who coached volleyball for 13 years and advised the volleyball team at Lafayette until two years ago.

While she remains flexible to change, Bukics maintains some of her old-school sensibilities. Her first rule for students is the baseball hats have to go.

“No hats in my class,” she said. “It’s just, to me, old fashioned courtesy. I want to see their faces.”

She also makes sure her students come on time to class.

“Don’t tell me you’re only two minutes late,” she said. “Two minutes on Wall Street is a couple million dollars for your client. End of story.”