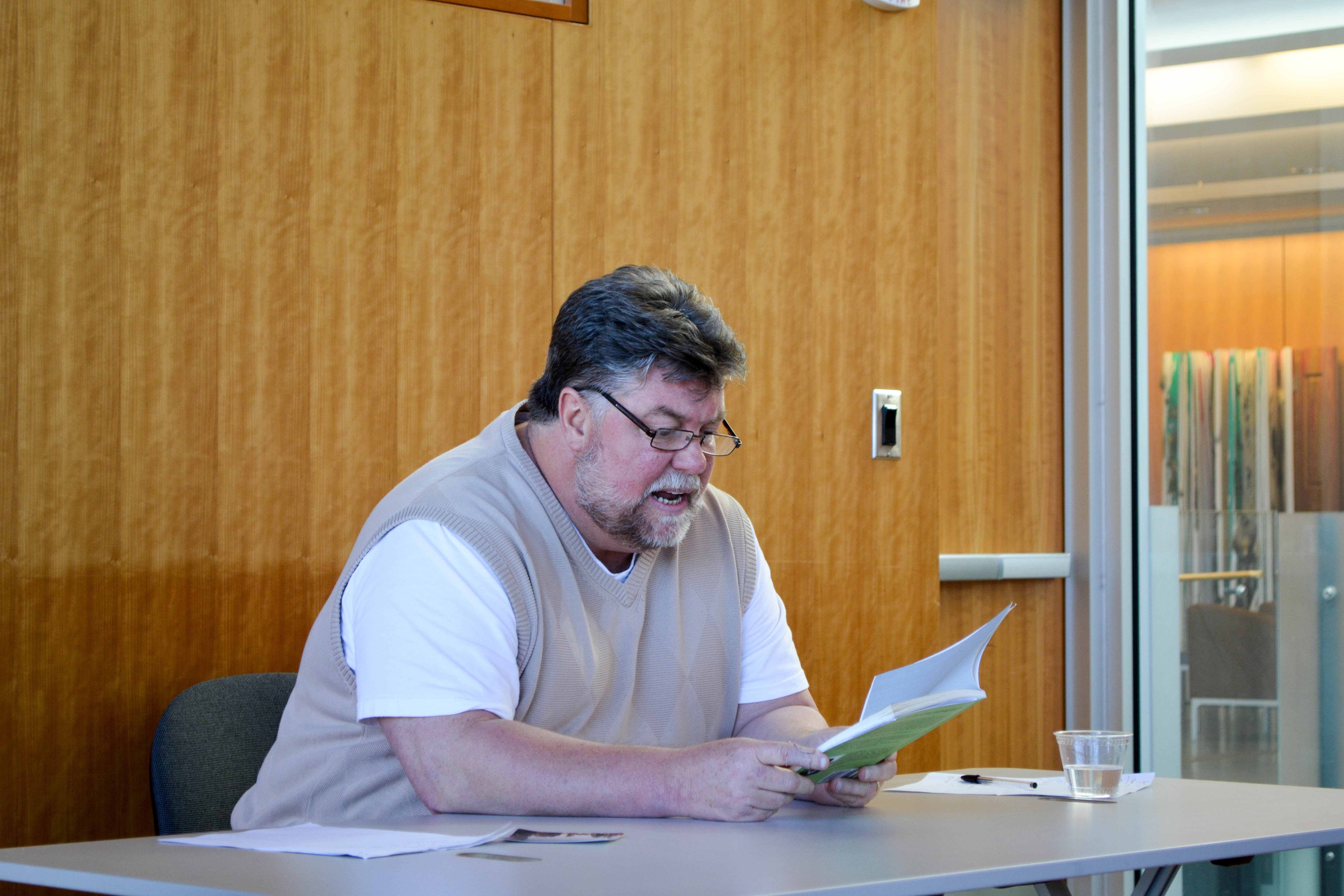 Photo by Courtney DeVita ’19. Brian Bradford reading a passage from “Greetings from Gravipause.”

Author Brian Bradford wrote a love story about being stuck.

On Monday, he came to Skillman Library to read passages from his most recent book, “Greetings from Gravipause,” a story about being stuck within a relationship, as well as to talk about the influence of his personal life on the novel.

The book bends genres as it jumps throughout space and time. It follows two plot lines – one of a first person narrator based on Bradford, and one narrated in the third person about Bradford’s father, who mysteriously left the family one day when Bradford was six years old.

Understanding the setting and protagonist necessitates having some understanding of Bradford’s upbringing, specifically that he is a Jersey kid. Talking about his Jersey roots, Bradford led the audience in a repetition of “Badda-bing badda-boom,” ending on a climactic “Fougheddaboudit”.

He spoke about his time living in the suburbs of Cranford, N.J., saying “the epicenter of all Suburbia. If Norman Rockwell ever fell asleep and had a wet dream, it would be Cranford, New Jersey. It is the full Suburban masterpiece.”

“There’s something that’s disingenuous with the suburbs,” he added. He said that having grown up in the much more honest and aggressive Jersey City, the culture of the suburbs was hard for him to wrap his head around.

However, this idyllic setting serves as an epicenter for the protagonist’s conflict. “At this point in the novel, the narrator is starting to have some questions,” Bradford said. “The sins of the father are visiting themselves upon the son, wondering if he’s going to go down the same road.”

As much as it may be a story about the protagonist’s inner conflict over his father, though, “Greetings from Gravipause” is still very much a love story.

“The term Gravipause [when the gravity fields of two celestial bodies neutralize each other]…that in and of itself…is really uninteresting, but if you apply that to love relationships it takes on a whole other business,” he said. “That’s what this is an attempt at.”

The midpoint between staying and leaving is paralleled between the narrator’s father and the narrator himself. As they find themselves in similar emotional positions, the two have similar echoed thoughts across space and time. The father is in a marriage that is going nowhere. The narrator met a woman in Japan, married her, brought her back to Jersey, and then drifted apart. Both are stuck in this state of “Gravipause”.

“One of the things I worried about, structurally, was the reader getting lost,” Bradford said. “[The two stories] weren’t written side by side…it was a happy accident.”

At the end of the day, though, this wasn’t an attempt to tell a deeply personal tale or to come to terms with his life.