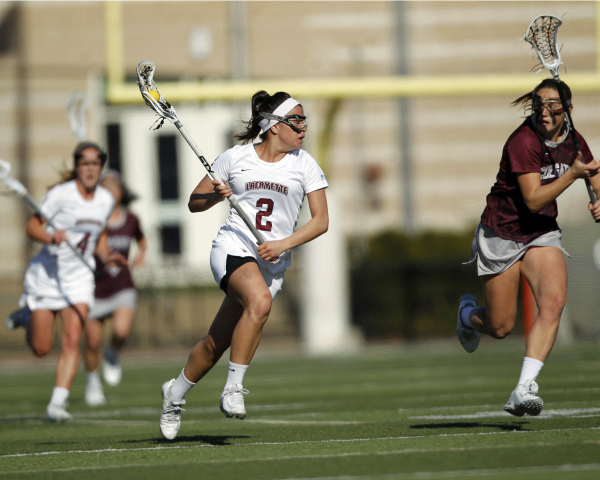 With only four games remaining in the regular season, Lafayette women’s lacrosse will look to finish strong after what has been a somewhat disappointing season so far.

High expectations for Patriot League playoff contention at the beginning of the season seem to have fizzled as the team (5-8 overall) currently sits third to last in the league, with a record of 1- 4 up to this point.

In spite of unfortunate circumstances, senior co-captain and stalwart defenseman Laura Rowan has kept a positive attitude, noting significant achievements in bringing the team together for a stronger future.

“The season hasn’t played out the way we wanted it to,” Rowan said, “But I think we’ve definitely grown a lot this season and learned a lot about ourselves, just as a team in general.

We were a pretty young team, with the majority of our players being freshmen and sophomores, so having them gain experience and teaching them how to take this program forward has definitely been something we’ve accomplished this year.”

For Rowan, the team’s younger members have showed a determination to improve—a culture set by the graduating seniors.

“I think I’m kind of leading a role in that sense, building up the sophomores and freshmen low defenders and letting them know that they do have a voice,” Rowan said. “We’re just being there as leaders and guides—kind of like an open book. They can ask me any question and I’m always making sure that they understand what I try to do defensively and teach them, and just move it forward and kind of build off of it.”

For any aspiring team, this positive team chemistry is a bright spot in a disappointing season, as new generations of players will hope to make similar impacts on the team’s culture moving forward.

The team’s most recent defeat came at the hands of Boston University, where the Leopards kept it close and lost 15-10 at home.

Following an exciting 17-4 victory several weeks ago against Army, the Leopards have dropped the past four Patriot League games.  In these four games, the team has only lost by 2.75 goals per game on average—a very low differential in lacrosse—showing just how fine the margins have been between success and failure.

“Asset wise, I think that we had a really strong senior class that were great leaders on and off the field and I think we’ve been teaching that to the junior class and helping them move forward in our coming games, and next year,” Rowan said.  “We have four games left, so we’re going try our best for the rest of them and try to get wins.”

Lafayette will face Holy Cross next, and will close the season with a series of Patriot League games, without a doubt hoping to redeem some close losses in recent weeks.