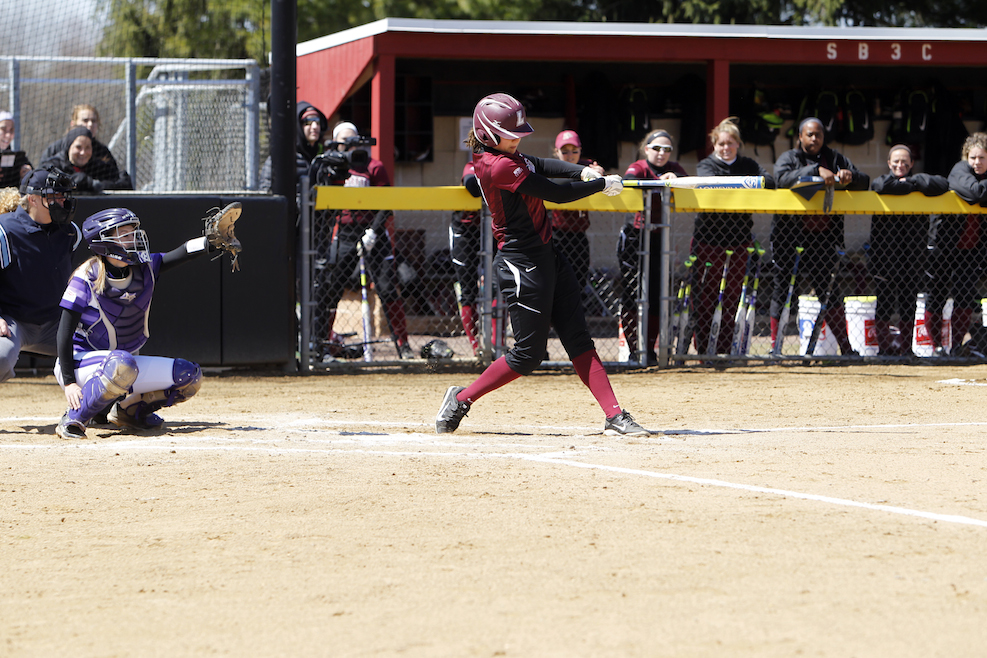 The softball team’s quest for the playoffs got a nice push with a series win against Holy Cross this weekend.

Despite losing the first game of the series 4-1, the team rallied two days later to sweep the double header and claim their first Patriot League series of the year and the first since 2012.

After falling behind by a run in the top of the first, the team exhibited some pop with sophomore second baseman and Patriot League Player of the Week Sam Sweigart sending the first pitch faced yard and Wensel following that up with another homer two batters later.

“Against Bucknell, I did the same thing,” said Sweigart, referring to her leadoff first-pitch home run in the first. “If the pitch is there, I’m going to swing.”

Sophomore centerfielder Morgan Biddle (2-3, RBI) and senior first baseman Allison Brown (2-4, 3 RBIs) also made both offensive and defensive contributions to carry the team over the Crusaders.

Nabbing that first game of the double header was an exciting development for the team, since recently they’ve tended to play worse in the top of double headers, according to both Sweigart and Wensel.

Splitting the first two games of the series, the teams battled for the series win in a back-and- forth match up with Lafayette holding on for the W. The team’s traded runs for most of the game before a three-run sixth opened up some daylight. The Crusaders promptly plated two of their own, but the Leopards held to secure the game and series victory.

Sweigart (2-3, 3 RBIs) and sophomore Stephanie Thomas (3-4, 2 RBIs) led the team’s offense, batting in half of the home team’s runs. Sophomore pitcher Stacy Gordon gave up one earned run over three innings of work to secure the win.

The wins this weekend and the positive impact they had on the team’s playoff standing were a bright spot in a slight rough patch for the Leopards.

“Coming into the season, we started off really strong,” Sweigart said. “We went down a little bit.

It’s mostly based on our offense and how we’re doing. But getting those two wins really put us up top.”

Despite the up-and- down season, Wensel said she trusts in the Leopard pitching staff.

“I feel like in the place we are right now everyone has that confidence in our pitchers,” Wensel said. “[Coach Jexx Varner] could put anyone out there and I would be like, ‘OK, we have a game here.’ It doesn’t matter.”

Looking forward, the team will have to capitalize with wins in upcoming games against Lehigh, Bucknell and Army, who are currently jockeying for the top three spots in the Patriot League playoffs. If Lafayette were to end up in a tie with Holy Cross for the fourth and final spot in the playoffs, this week’s series will be the deciding factor to send the Leopards into the postseason.

“[These wins] really put it in perspective that we can make the tournament,” Sweigart said.

“There’s no doubt that we can beat these other teams as long as we work together as a team and string together hits.”