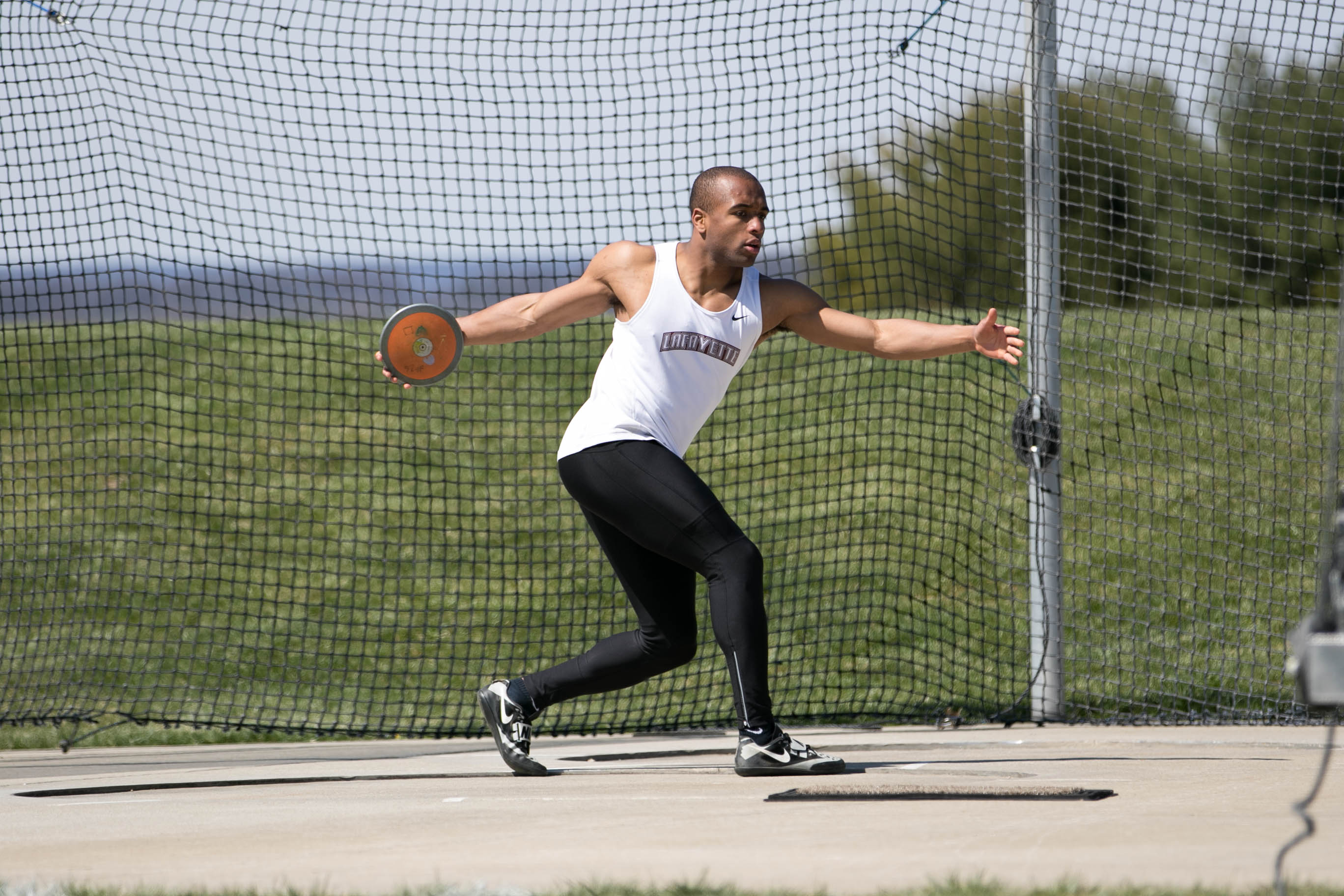 Since the beginning of the outdoor track season in March, sophomore Dave McGriff has been busy.

In the first outdoor meet, he broke the 21-year old school record in discus. Since, then he has PR-ed in the hammer, came in first in discus in the seven-way meet and placed first in the discus and hammer at Sunday’s Lehigh meet.

Additionally, McGriff has spent his Tuesday, Wednesday and Thursday mornings attending 6 a.m. physical training sessions at Lehigh University as a scholarship recipient and member of the Reserve Officers& Training Corps (ROTC). The Lafayette ROTC program is combined with programs at Lehigh, Moravian, DeSales and Muhlenburg.

As a freshman, McGriff admits he struggled to manage the physical fatigue that resulted from training both for ROTC and for throwing.

“We didn’t do a great job last year, but this year Coach has been asking what I’ve been doing in the morning so that if, say in the morning I did ten 200s, she probably won’t have me do the sprints this afternoon,” McGriff said.

“We’ve managed his training a little bit better in a sense,” head coach Michele Curcio said. “This year, he’s much more communicative. I think last year he wanted to try to do everything. He wanted to be the best ROTC guy, so he did everything, and he didn’t want to back off with workouts on the track. We’ve kind of managed his training a little bit more.”

And this management is necessary. As a part of his physical training, McGriff runs, does combat fitness and upper body and core workouts.

“During the year, I’m significantly more tired than I would be,” he said. “But I like to think it helps me stay in shape so I can practice harder than I would have been if I was just throwing.”

As a member of ROTC, he also spends his summers on training trips. In addition, he takes a military science course and a military science lab each semester. This means that, for many semesters, McGriff has had to take five courses.

McGriff was inspired to join ROTC by his father, who attended West Point Academy and served as a Major in the army specializing in air defense artillery. As a part of his ROTC commitment, after graduation McGriff has a service requirement of four years in active duty and four years in reserve. At the end of his junior year, McGriff will be assigned a branch based on his GPA, physical training score, leadership experience and general performance. He hopes to be assigned to active duty field artillery.

McGriff said he plans to stay in the army even after he has fulfilled his service requirement.

“Right now, I’m planning on staying in the army for longer than that,” he said. “After that, my goal has always been to be a strength coach and own my own strength and conditioning place.”

In addition to fulfilling his commitment to the ROTC program, McGriff has excelled as a member of the track and field team.

In his first meet of the outdoor season, he broke the record in discus with a throw of 179’ 6”. But McGriff said he initially didn’t believe the measurement.

“Coach went up to me and was like ‘That’s the record,’ and I was like, ‘I think they messed up the measurement, Coach.’” McGriff said. “I kind of realized I got it by like my sixth throw.”

This past weekend, McGriff also came in first in both the discus and the hammer to help Lafayette secure a tight 101-98 victory over Lehigh.

“I knew I was in a good position to beat Lehigh in the events that I did,” McGriff said. “I just kind of went into it with a mindset of, ‘Make sure you get your job done.’”

Although the additional physical strain on his body from training for both ROTC and throwing may need to be managed, Curcio thinks the mental training McGriff endures at physical training benefits him as an athlete.

“He goes through some things that are a lot more trying in a sense of how they train,” Curcio said. “It’s just how hard can you go. It really changes their mental game.”