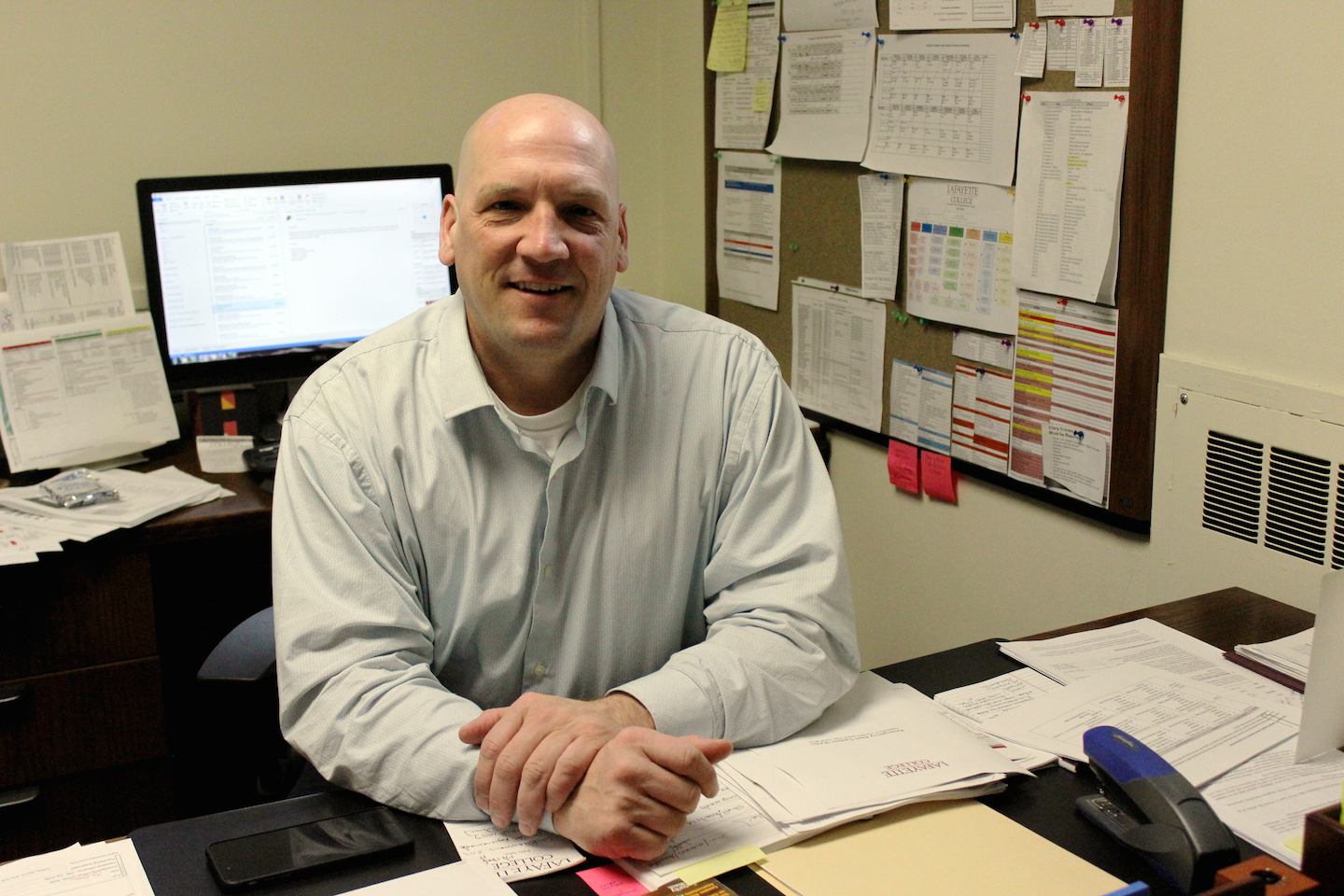 When Jeffrey Troxell interviewed to be assistant Director of Lafayette College Public Safety in 1990, he sat in the same office where he sits now, over 25 years later. But now he is on the other side of the desk, as director of public safety, and he is the one looking to hire.

Troxell moved into his new, but familiar office in March, when he was officially promoted to director of public safety. After moving up from assistant to associate director throughout the years, Troxell stepped in as acting director this semester, while former director Robert Sabattis was on personal leave.

Sabattis let the college know that he would not be returning back in February of this year, according to Vice President for Campus Life Annette Diorio. The details of his departure from the college are unclear and Sabattis could not be reached for comment. By March 1, Troxell was promoted to fill his position, Diorio said.

“When the announcement was made, I was pleasantly surprised at the reception from the campus constituents, just the people I’ve known for all these years. It was overwhelming,” Troxell said. “Twenty-five years of your life is kind of a long time and you don’t realize a position change or announcement like this people would even think to remember.”

Diorio said that having Troxell in the position of acting director made the college think about what they most wanted from the head of the department. Because the department is getting larger and more complex, the college wanted to start thinking about safety in more broadly defined terms, Diorio said.

“I think logically for many people you think you most want your director of public safety to be a police officer,” she said. “But through watching Jeff work and understanding the complexity of the work and the way various pieces of it fit together, it actually became clear that a police officer might not be the ideal candidate for that role.”

Troxell has a comprehensive approach to safety, Diorio said. He has a B.S. in safety management from Indiana University of Pennsylvania and prior to starting at Lafayette and worked a safety related job for the aerospace company Lockheed Martin.

Troxell describes his managerial style as a mix between Sabattis, who had an extensive career in law enforcement before joining the college’s public safety department, and Hugh Harris, who Troxell said built the department from the ground up in 1982.

He said that working closely with Harris throughout his time at Lafayette helped prepare him for his new role as director. Harris still remains an active member of Lafayette’s public safety department. After retiring in 2013, he came back temporarily as director when Sabattis was first on leave. Now he works part-time driving for the school. Harris said that when he started as director, there were no police officers, no cars and no radios. Public safety worked out of a small little room down the hall from where they are currently located in Marquis.

The public safety force consisted of “some night watchman folks that worked for plant operations and some security people that worked for the dean of students at the time,” Harris said.

But while Troxell may be in the same office he interviewed in 25 years ago, the public safety department has experienced a significant amount of change from when it started with Harris.

What was once a “two-person security type department” now has four subcategories: environmental health and safety, parking and transportation, police and security and dispatching and operations, Troxell said.

Public safety is also anticipating a move to a new building, which they will share with Lafayette College Facilities Planning and Facilities Operations in about a year and a half, Troxell said.

Troxell’s next step is to hire his replacement, whose title, Diorio said, will be different from the associate director title that Troxell had.

This new hire’s job will be to supervise public safety’s police officers. The hiring committee will be looking for someone with an extensive law enforcement background, who has demonstrated supervisory experience and who has done investigative work to fill that new position, Diorio said.

Until then, Troxell is taking on twice the work.

“It’s been a challenge,” Troxell said. “There’s a lot of phone calls, a lot of paperwork.”

“I get calls in the middle of the night sometimes depending on what happens,” he added. “So it’s a constant 24/7 [job.”