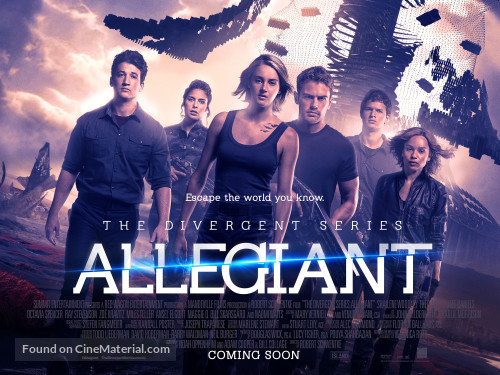 “Allegiant,” the third film in the “Divergent” series of young adult film adaptations, is one of the worst films ever made by human hands, containing almost no substance, acting that varies from being unbearably bad to depressingly horrid, writing that is about as compelling as a legal brief for a parking ticket and some of the worst fight scenes ever put to film.

So in other words, it’s the best film in the series.

The plague of bad YA adaptations has not quite departed from the box office – though the days of “The Host” and “Twilight” have passed us by, the broken remnants of that genre continue to walk the earth, cursing cinemas everywhere with their mediocrity. The “Divergent” trilogy is one of the worst offenders in this regard. The first film had no redeeming qualities, but but there is a definite trend upward for the series, as each gets marginally more interesting than the last.

However, that does not mean that these are not films crafted through malicious intent and intense effort to crush any hint of quality from the plot or characters. Director Robert Schwentke, who holds the dubious honor of directing this film’s predecessor “Insurgent,” as well as 2013’s critically panned “R.I.P.D,” is possibly the only director with the sheer talent to craft a movie this wretchedly devoid of quality, finding new and innovative ways to rob each sequence of any tension, and managing to get the absolute worst out of his actors in a way that few directors could ever dream of. The fact that this man has not won a Razzie yet for his contributions to awful cinema is truly astonishing.

To be fair, Shailene Woodley, who plays the lead role of Beatrice Prior, has shown some improvement, and even learned a third facial expression especially for this film. Prior’s boyfriend Tobias Eaton, played by Theo James, continues to be tolerable as hunky eye candy. And the story does not insult the audience’s intelligence as much as previous entries do.

That last part may be because the story is so ridiculously threadbare that it is hardly worth mentioning. Three films into the franchise and we are still learning more about the minutiae of how this boring, idiotic and hilariously improbably society works than about our heroes and their struggle for freedom and self-identity. As the story is based on the first half of the third book in the trilogy, it bears the signature hallmark of “Twilight Breaking Dawn Part 1” and “Hunger Games: Mockingjay Part 1,” in that the story is all exposition for a much more interesting second half.

At the height of the film, our heroes venture beyond the wall that protects them from the horrors that lie outside their dystopian civilization, and they are truly horrific—some of the worst special effects I have ever seen in my life. If I had to live next to a shoddily put together green screen wasteland, I’d build a wall too. This highlights a problem that runs throughout the entire series of bad visuals that make the bad writing even more terrible.

“Allegiant” is a prelude to a movie that might be even less awful that comes out in June of 2017, where the characters might actually do something. However, this movie manages to keep from feeling incomplete by being a complete failure. Better than the first two, still terrible.