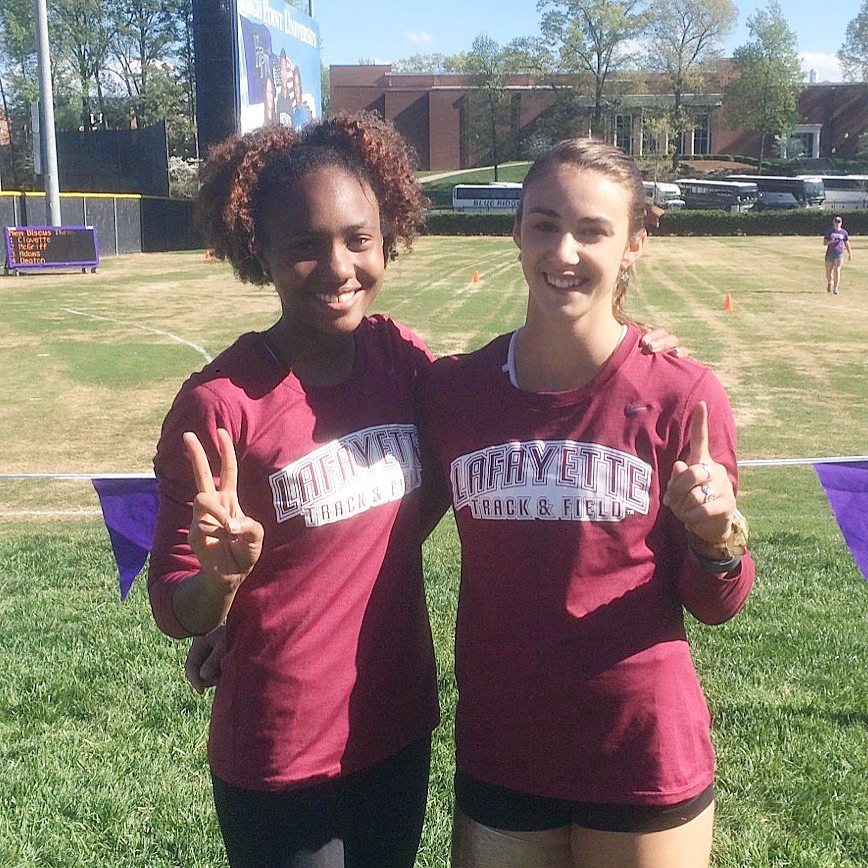 Senior Devin Smith and junior Drew Davis both broke a Lafayette-held record this past weekend at High Point University.

Both Smith and Davis finished in first and second place, respectively, in the 400m. They broke the record held by Smith of 55.66. Their stellar finishes landed both among the fastest marks in the 400m in the Patriot League this season. Smith now holds the first fastest time, while Davis remains close behind with the third fastest 400m time in the Patriot League.

Smith’s time of 54.38 was closely followed by Davis’ 55.31 finish. This accomplishment for the Leopard sprinters seems a product of hard work during training. Smith and Davis are not only teammates but training partners, as well.

This means that, based on the events they run, Davis is paired up with Smith, the well- decorated senior, during practices. The two compete in time trials together and push each other in training. Davis said that a result of their shared training time is that they have learned how each other thinks and runs.

For the junior, this means she gets to train with one of the top runners in the program’s history.

“It’s hard because she’s really fast,” Davis said. “Sometimes I get nervous before practice especially knowing that we have to run at like 95 percent of our top speed. She’s faster than I am so it really pushes me because I want to be at that level at some point. So I know if I stay close to her then I know I’m doing really well.”

As evidenced by their record-breaking performances this past weekend, the two seem to be training well together.

“It shows where their training is,” head coach Michele Curcio said. “They’re in great shape, they came off a really good indoor season, and so I think for this early in the year, what they’ve been doing is a testament. They’ve been working really hard.”

“We practice together, so we both know how to run together in races because we do it in practice. For us to both run really fast, it felt like practice but with the reward of running a really good time,” said Davis.

Smith, too, has found benefit in training with Davis.

“We work off each others strengths and weaknesses,” Smith said. “She’s better at the longer distance workouts and I’m better at the sprints so we kind of help each other out through workouts.”

She said she attributes Davis’ presence in the same heat and in the lane next to her to the record breaking performance this past weekend.

“Drew and I found out we were in the same heat and the lanes right next to each other,” Smith said. “We kind of just went into the race with the attitude of ‘This is just another time trial, another practice. Lets go out there and run hard.’ It was really helpful having a teammate right next to [me].”

For Smith, despite her success in the indoor season and in the first meet of the outside season, her record finish in the 400m came as a surprise.

“I was really excited. I don’t think I expected to run that fast my first 400 of the [outdoor] season,” said the senior.

But with much of the season remaining, both Smith and Davis wish to accomplish even more.

“I definitely am looking forward to hopefully breaking 55 [seconds] at some point since I know that I can do it and I’m almost there,” Davis said.

“I want to try to come back and win the 400 at outdoor Patriot Leagues,” Smith said. “I know we have goals of winning the 4×400 in Patriot Leagues. Even beyond that, I’ve kind of started thinking about qualifying for regionals.”