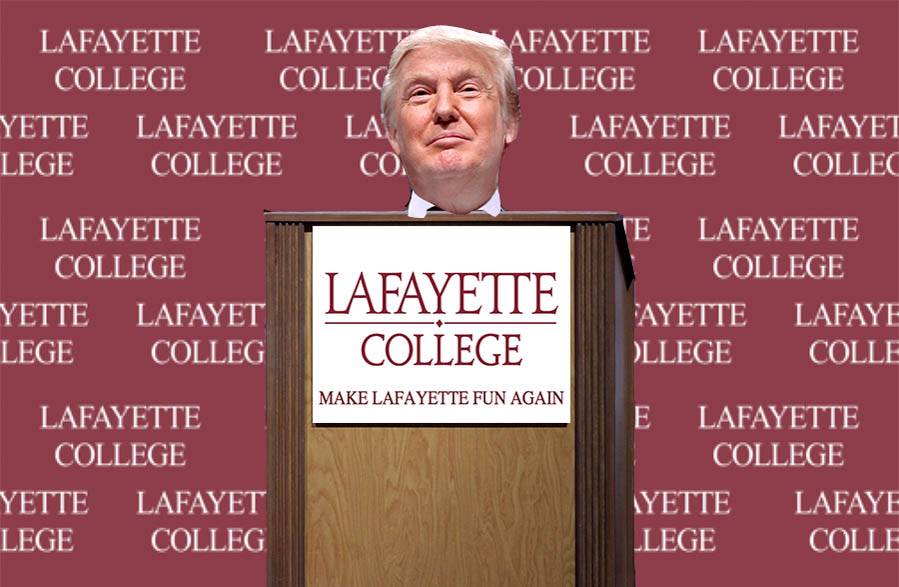 Chair of the National Endowment for the Humanities William D. Adams has been replaced by presidential candidate and businessman Donald Trump as the commencement speaker to inspire graduates to “terrifyingly unlikely success.”

According to administrators, Trump “perfectly fits the Lafayette ideal.”

“Whenever Trump speaks, he really embodies the Cur Non spirit,” said Dean of Important Speakers Charles Walker. “He never thinks about ‘why not.’”

The Scoffayette could not confirm whether or not Trump has donated to the college, but President Alison Byerly announced that “Trump Hall of Civil Rights” will be under construction as part of the expansion plan.

According to Trump, Adams does not deserve to give this year’s graduation speech because he is a “loser.” Trump offered no other explanation.

In an interview, Trump referred to women and minorities using unprintable terms. A group of white male students said these terms were not offensive and Trump was merely “fighting against political correctness, which is totally not the same thing as racism or sexism at all.”

He also sent out a series of tweets insulting the wives of every male professor on campus.

Trump nominated himself for this year’s Pepper Prize, which people initially thought was a joke. It wasn’t.

As part of his campaign, he has promised to get color printing, bring back Derby Day and build a wall in the middle of the Quad that Lehigh will pay for.

“I love Lafayette University,” Trump said. “Really excited to receive an honorary degree there. I’ve received many, many honorary degrees. And Lafayette is great. Wonderful historical figure. He stood for everything I stand for.”

Trump did not elaborate on what exactly that was, but added that it was important to “make Lafayette fun again.”

There are some concerns that Trump will not show up to graduation, since he found out Fox News host Megyn Kelly will also be receiving an honorary degree.

Pretty funny. But you realize he actually gave the commencement address at Lehigh in 1988.