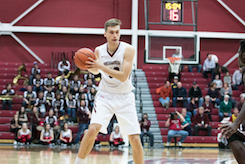 When junior Constanza Davis and sophomore Ryan Moore applied to Lafayette, they had no intention of becoming varsity athletes. Coming from Italy and Belgium respectively, but each with strong ties to the U.S., the students were interested in Lafayette for reasons other than sports.

Little did they know, the two would soon co-represent Lafayette’s Fencing and Swimming international population.

As NCAA Division I competition continues to increase, so does international recruiting. Davis and Moore make up two of the 18 international students at Lafayette (including the class of 2020). While most athletes plan to play in America at an early age, Davis and Moore are anomalies, each walking on to their respective teams after committing to Lafayette for the academics.

Moore, who primarily competes in breast stroke and free style events for the men’s swim team, was born in the U.S., but lived in Belgium for six years prior to coming to Lafayette.

“I felt like I identified as American more than anything,” said Moore, a chemical engineering major. “So I wanted to come back and just go to school here. I didn’t have any intentions of swimming here, but I came here on Accepted Students Day and I met the [swim] coach in the hallway.”

Davis, although born in Verona, Italy, has also previously lived in the States, but spent most of her childhood moving between countries in Europe as her American father relocated due to his job in the Army. Because she attended small, international schools, athletic opportunities were limited, especially when it came to fencing.

“I’ve always had this fascination with the unattainable,” said Davis, whose dad was the captain of Lafayette fencing team when he went to Lafayette. “Specifically swords and stabbing people, which I then never got to do until I came to Lafayette.”

Due to her athleticism and equally inexperienced team members, Davis had few issues adjusting to the actual fencing, but hit a few cultural snags. She commented on certain adjustments she has made over the past three years: for example, roll-on deodorant and fixed shower heads.

“It’s small things like that,” Davis said. “Because the big things you hear about, and you expect them. But like shower heads. Most of them are fixed here…and in Italy that’s unheard of. How else are you supposed to clean yourself? I had to relearn how to take showers.”

While Davis adjusted to American living, Moore adjusted to differences in the swimming culture.

After spending six years fighting language barriers in Belgium on his club teams, and swimming in meters rather than yards, Moore came to Lafayette less knowledgeable of his specific skill sets than his fellow teammates.

“I didn’t know any of my times coming in, and so I didn’t swim that many longer events,” said Moore, who spent his first year swimming middle distances. “I swam the 500 for the first time this year and [head coach Jim Dialey] was like, ‘Hey, you can swim that!’ And I was like, ‘Oh no, please not longer stuff.’ So I did that at Patriot Championships this year.”

Both athletes also noted the school spirit at Lafayette—an increase from their high school programs where clubs dominated the sports culture.

Despite these challenges, Moore and Davis both said they’ve rarely felt like outsiders on their teams, a sentiment shared by other members of the Lafayette athletic community.

“Our culture as a team is a very inclusive one, a very positive one,” said field hockey head coach Jennifer Stone, who has five international athletes on her squad. “I feel very confident with the group of young women that we do have that if we were bringing in a person from

Easton or if we were bringing is a person from Zimbabwe they would be met with the same level of welcome.”

For international athletes, the post-graduation decision to stay in America or go home can be a difficult one. While Stone assumes most of her players, who hail from Canada and Scotland, will return home after graduation, Moore and Davis both plan to stay in the U.S, although Davis finds the choice more challenging than her swimming counter-part.

“I would love to go back home on both an emotional level and a lifestyle level,” said Davis, who plans to pursue cartography after leaving Lafayette. However, she said she would rather stay in the U.S. overall.

Despite these challenges, Stone addresses international athletes continued importance to the Lafayette community, and the need to continue recruiting and providing opportunities for others to follow in their paths.

“There are a whole lot of benefits to having those players join the program, from an added cultural experience for them,” Stone said. “And then equally…the U.S. kids having the ability to play a sport with an international player that has a completely different exposure, culture, experience to the sport is an unique opportunity as well.”