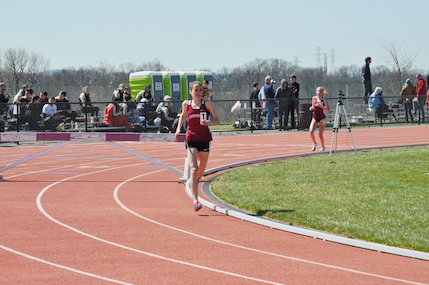 Lafayette Track and Field started the spring season off on a positive note last week, placing second and third in women’s and men’s events respectively.

The team enjoyed good performances all around, most notably on the women’s end where seniors Devin Smith and Erin Keen ran alongside junior Drew Davis to claim the top three spots in the 100 meter dash.

For the men, junior Patrick Corcoran and sophomore Dave McGriff enjoyed personal records in the hammer throw, while senior Thomas Day managed third in the 1500m with a blistering 4:08.

Women’s senior captain Steph Benko lead the way in the 1500 as well, and from her perspective, things are looking up for Lafayette track.

“We just have a very good attitude because it was the first meet, and everybody was out there cheering for each other and helping each other the whole way,” Benko said. “I think that helped a lot because when you’re in a race, whatever event you’re doing, it helps so much to have a little crew behind you helping out.  A solid team dynamic is really helpful too, which we’ve been trying to focus on.”

The outstanding late-winter weather has provided an early outdoor start for training, improving both spirits and abilities more rapidly than in years past.

However, both Benko and junior cross-country captain Andrew Morra believe first and foremost that this encouraging early-season success can be attributed to a refined team philosophy that has been absent in years past.

While “teamwork” is usually a word better associated with group sports such as soccer and football, Lafayette track is finding a way to gain momentum from the support of one another.

According to both captains, some new practices have been employed to help bring the team to the next level, such as joint men’s and women’s captain meetings and an overall greater level of communication throughout the team.

While the ultimate goal for each runner is to bring pride to the Lafayette colors, the fact remains that runners from the same school must often compete against one another in the same heat of a race, driving competition internally rather than only externally.

For Benko, this competition was a welcome opportunity to motivate herself and her teammates – even while the race went on.

“I was with one of my teammates, and we were really excited to race with each other and she said, ‘Ok, if I start to fall of just yell at me, and if you start to fall off I’ll yell at you,’” Benko said.

“And so at one point during the race I had passed her and I was like, ‘Alright! Come on Lex! Let’s go!’”

For Morra, who has been sidelined with an injury for a week or two, this recent success has made him antsier than ever to make a return to action.

“After Saturday I’ve been trying so hard,” Morra said.

“I hurt my knee and it’s been pretty swollen, but I’m just trying to do everything I can to get back out there,” he said. “I want to be out there, I want to be part of the success and feel like I’m part of the team.”

The Leopards will hope to extend this positive start in their home meet against Lehigh on April 9.