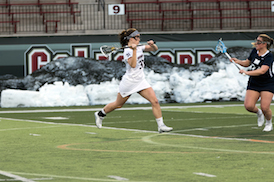 Rachel Robertson: So you were just named Patriot League Attacker of the Week—how did it feel to win that?

Kirsten Wilhelmsen: It was really exciting. It was my first time being Patriot League Attacker of the Week. I’m grateful for it.

RR: After that award you reached a huge milestone of scoring your 100th career goal. How did that feel?

KW: It was really fun. More exciting than the 100th goal is that we won that game and that’s ultimately always the goal. It was exciting to have it on such a good day. Hopefully we can keep it going.

RR: How common is it to reach 100 goals, especially as a junior?

KW: It’s happened before so it’s not exceptionally difficult. However, I think [doing it as] a junior is a little early. It’s just a a testament to our attack I think really. Offense-driven systems that are really producing a lot of goals.

RR: What is special about your system?

RR: You are currently the leading goal scorer for the Leopards—is that a role you’re comfortable in?

KW: It doesn’t exactly come naturally. When I started playing lacrosse I was defense, then I got moved around and then I came in as midfield and now play attack. It’s something that I’ve learned to fall into the roll. It’s been fun.

RR: Having played defense, what do you see as the relationship between your offensive production and the Lafayette defense?

KW: I really like playing attack. There is a set goal, like I am there to shoot the ball. I like having that goal there, but so many of our attacking plays and so many of my goals come from defensive stops and big defensive plays. That really generates our offense. It goes across the board, but attackers have that ultimate goal of scoring goals.

RR: What are your goals for the season? Team goals?

FW: A personal goal is to practice as hard as we play in games and to really put forth effort to being the best player I can be. Team goals are kind of aligned with that in just really executing to our top level that we can play at. Playing with our purpose and standard in mind.

RR: So the lacrosse team has had a decent start to the season, posting a 3-2 record so far. How does the team feel about the start?

KW: It’s really exciting. We only won four games last year and two of the games we’ve won this year are against opponents we lost two last year, so you can definitely see growth there especially so early in the season.

KW: It wasn’t always an easy decision. I played lots of sports growing up and then toggled between soccer and lacrosse all throughout high school. When I visited Lafayette and the lacrosse program I just instantly knew that this was where I wanted to be.

KW: Freshman year when we were out at Metzgar, one of my classmates was blown over by the wind. Just in the middle of practice, going to catch the ball, she fell over in a big gust of wind. I think through the years it’s been exaggerated a little bit but it’s great.

KW: I love food. I’m a big fan of soups and my friends always make fun of me for it. I’m just a fan of soup on a cold day. Chicken noodle soup, tomato soup… any type of soup.

KW: I really enjoyed my first year seminar with professor [Brett] Hendrickson. It was called “What is a Miracle” and it was one of those awkward first semester freshman year classes that I’ve actually made a lot of friends through.

RR: Who would play you in a movie about your life?

FW: Oh man… It would have be someone equally awkward and happy and I just can’t think of somebody right now.

FW: I worked as a camp counselor this summer and we always asked the campers what their spirit animal was. I’m pretty sure they came up with me as a Golden Retriever puppy. Basically, the Bailey’s puppy.

RR: Any words of wisdom?

KW: Be purposeful and smile a lot.