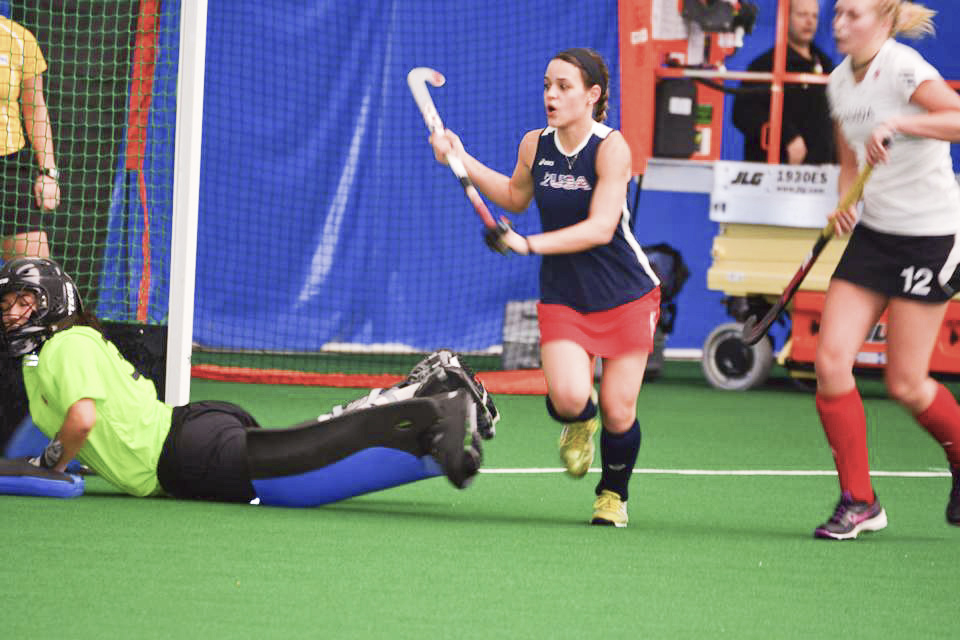 Lafayette Field Hockey star Amanda Magadan is gearing up for her next international adventure as the USA National Women’s Under-21 team gets set to head to Trinidad and Tobago for the 2016 Pan American Tournament.

Magadan, currently a senior member of the squad, will look to help lead her team through the group stage of the tournament where they will face Canada, Mexico and the tournament hosts.

International competition is not new to Magadan and she is confident going into this tournament, having already represented the US in other matches.

“From my past two years playing Canada and Great Britain, we’ve been pretty successful so I think if we generate a lot of goals and stay united we’ll be able to be pretty damaging,” Magadan said.

While undoubtedly talented, the multi-faceted midfielder has faced a challenge in national play, as the team’s talent pool is far more diverse and gifted than any single college team.

“A lot of times here my best skill or my best asset is my speed,” Magadan said. “But at that level everyone is fast. Having really clean elimination skills and being able to dodge defenders would probably be something that is important for me to be successful in.”

Now in her second year with the national team, Magadan will look to take on a leadership role and nurture the younger players.

“The juniors last year were the ones who took me under their wing the most,” Magadan said. “It allowed me to feel comfortable with everyone else. And now as one of the older girls on the team, I’m actually the one who’s able to put people under my wing so that’s pretty interesting.”

Diverse styles and skills from all corners of the country simultaneously give this team its strength, but also highlight a weakness — chemistry.

While the junior national team is truly an assembly of the best collegiate field hockey players the nation has to offer, chemistry is not something to be taken for granted.

“We all come from different schools, different styles of play,” Magadan said. “So it’s always initially really weird at first — but once we have our first practice, get all our kinks out, we mesh pretty well and get along very well.”

Even after four impressive seasons of playing tough teams at Lafayette, Magadan said that she has plenty to work on with stiff competition ahead.

“If we play a team in pool play and then have to play them in the tournament style bracket play, we have to be able to beat them twice,” she said.

Every member of the team comes from a different team with a different coach and coaching style to challenge theme, and for Magadan, this difference is essential to understand.

It can be tough for new players to get used to the head coach of the under-21 team, Janneke Schopma, but Magadan came to know her well.

“Once I started to be one of her players more often and get to experience her on and off the field,” Magian added, “it was easier to see that she does care about all of her players and that she has a really funny side to her.”

Magadan will once again get the chance to work with Schopman when the tournament kicks off March 29.

Amanda is actually a junior and will be on the field NEXT year for the Leopards….her senior year.