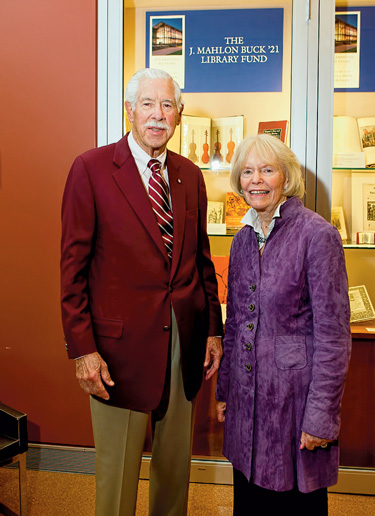 A donor was named for the recently opened arts building downtown last Friday. At a reception for the board of trustees, President Alison Byerly announced that the new building will be named after William C. Buck ‘50, an alumnus of the college and member of the board.

The building will be home to a film-screening room, dressing rooms and scene and costume shops among other academic and extracurricular perks, according to a recent article from Lafayette Communications.

Buck’s multi-million dollar donation marks the completion of the construction of the arts campus, where there will be an official opening ceremony in the fall, Byerly said. The school, however, is still fundraising for the naming of some specific spaces and is in conversation with a couple of other donors for those locations.

According to Byerly, finding a donor can sometimes be a challenging process.

“It’s a matter of finding a fit between the donor’s interest and their commitment to the college, and then something that we feel is important,” she said. “The successful conversations are one[s] where there’s a nice confluence between what they care about most, and what the college needs.”

This time, Buck was a fit.

“The family has been associated with the college for many, many decades, and they have always been very supportive of the arts in particular,” Byerly added. “He’s very loyal to the college, and he feels very pleased about being able to give back to the institution.”

Although he is now retired, Buck continues to give back in the Philadelphia area, contributing to organizations such as the Philadelphia Museum of Art. Additionally, he is a partial owner of the Phillies, according to Byerly.

Associate Director of Major Gifts Janice Egan said Buck has even contributed to her daughter’s school. A close friend of Buck, Egan says that he is well known for his modesty.

“He certainly values and appreciates that he had the opportunity to help Lafayette,” Egan said. “He’s a very [humble] man and does not like a lot of fanfare and publicity.”

Byerly echoed this sentiment, adding that Buck did not want to attract a lot of attention for his donation to the building.

“He is a humble donor who was anxious that even the lettering on the building not be too large,” she said. “He wanted the emphasis to be on the college and not on his personal gift.”

The plaza adjacent to the new building is named after Edward Ahart ‘69, who attended the reception Friday.

Ahart said that the college’s initiative to expand arts facilities on campus is “wonderful.”

“You know, the connection with the city, the connection of the arts and the more technical side of the college, whether it’s engineering or the sciences, that integration and [interdisciplinary principles] is really what Lafayette is about,” Ahart said.

After watching Lafayette expand over the past several decades, Ahart said he thinks that this expansion will be positive encouragement for students to get involved in the arts.

“It will become quite a dynamic place for students,” he continued. “It really speaks to what we’re trying to do and we’re about. I think it’s really a wonderful achievement.”