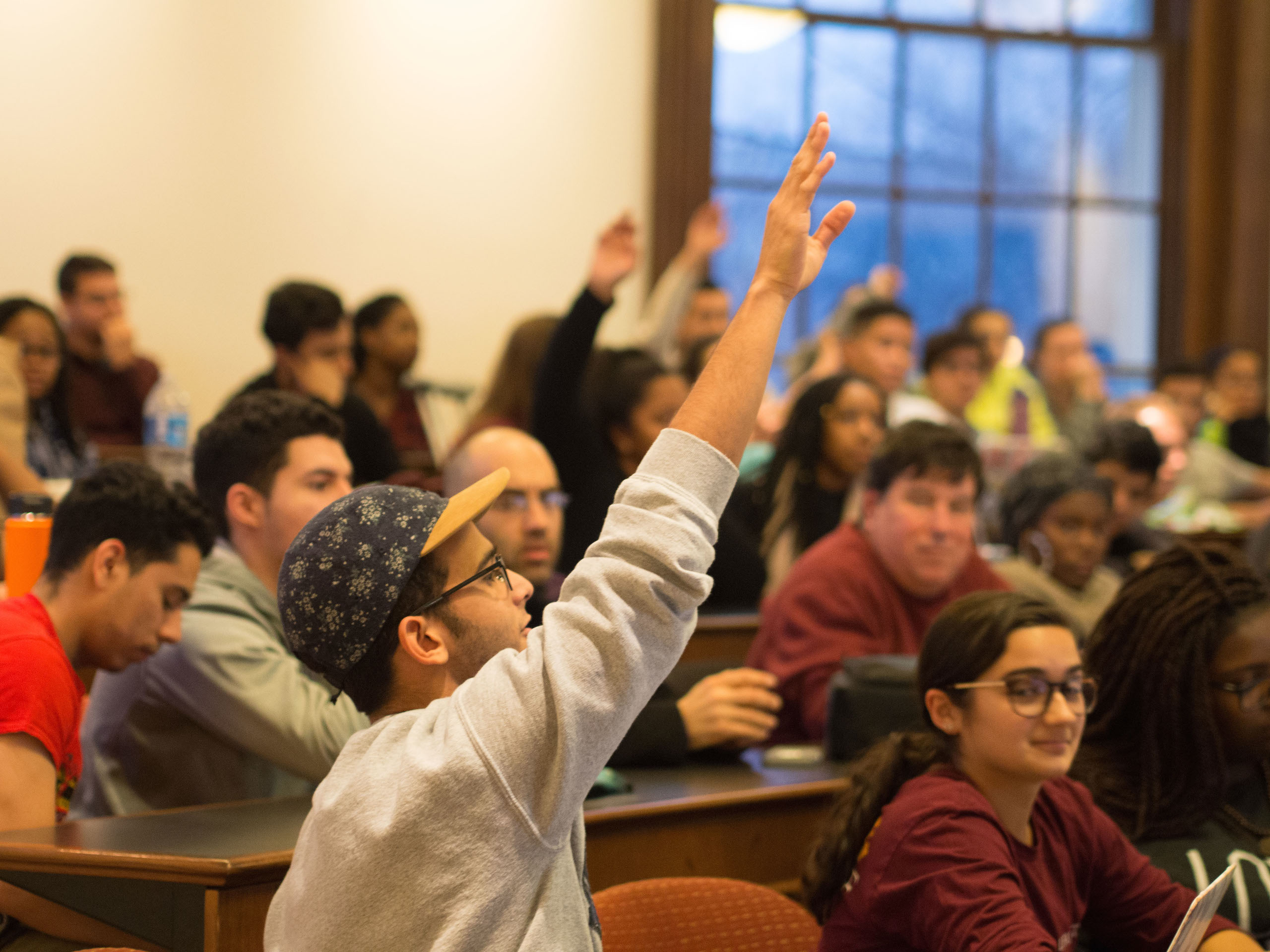 By Christina Shaman ’16 and William Gordon ’17

Roughly 100 students, faculty and staff attended what turned into a 3-hour long open forum Wednesday full of high emotions, pointed questions and frustration. The forum, which was hosted by two faculty committees, was on the recommendation to reallocate funds from Posse D.C. to need-based financial aid.

Students at the forum questioned the working group’s and faculty committees’ understanding of the significance of Posse, a full-tuition leadership scholarship for students from public high schools, at Lafayette.

They spoke of the mentorship programs and “safe space” Posse provides for students of diverse backgrounds. Some students pointed to larger concerns regarding race and exclusion on campus.

The open-forum was scheduled four days after the Lafayette College Board of Trustees approved the general goals of the college’s three presidential working groups: to increase enrollment size, move toward need-blind financial aid and to benchmark faculty salaries.

While the board approved of general goals this weekend, it did not decide on specifics, like whether or not funding for need-blind financial aid would come from Posse D.C. That decision is left up to the administration. The Enrollment Planning Committee (EPC) and Diversity Committee plan to provide what’s called “significant advice”—recommendations and suggestions about the working group on financial aid’s report—to the president.

Chair of the EPC and Associate Professor of Classics Markus Dubischar said after the forum that the significant advice will most likely be provided in April. Dubischar was also a member of the presidential working group on financial aid. At press time, another open forum was scheduled for Thursday afternoon to discuss Posse.

There is currently no timetable for the administration to approve the recommendations on implementation by the working groups, Dubischar said.

According to Dubischar, the purpose of these forums was to create a dialogue that would help facilitate the decision making process for the EPC.

But many students at the forum questioned why they were not involved in the discussions that took place before the recommendations were made, with one student calling the process “ass-backwards.” Students said they felt information was being hidden from them and that they would not have found out about the recommendations if information had not been “leaked.”

Vice President for Enrollment Management Greg MacDonald, who facilitated the forum alongside Dubischar, said that “students were intended to be included all along.”

“I think there was an intention to have students involved in this process from the moment that the recommendations went to the faculty and to the board and the fact that we had this conversation within three or four days of the board meeting I think is proof,” said MacDonald, who also served chair the presidential working group on financial aid.

Dubischar said that, procedurally, he was the right person to hold this open forum, because it his job as chair of the EPC. However, he said he believes this issue is much bigger than the EPC.

In the presidential working group on financial aid report, one of the recommendations is, “In the near-term, the college would be better served maintaining Posse in NYC, and redirecting $500,000 from Posse DC (in 2016 dollars) toward meeting our need blind initiatives.”

But both Posse and non-Posse students at the forum said that the costs of losing Posse D.C. would be greater than that $500,000 for the college.

After the forum, Fabian Rogers ‘17, a member of New York Posse, said that the college needs to have a plan in place to replace the leadership training Posse students receive before they come to Lafayette, and the support group and mentorship program Posse provides them with, before it makes any moves to get rid of the scholarship.

“There’s a detachment between the experience and the funds,” he said after the forum.

For Assistant Professor of English Megan Fernandes, the problem lies in the discourse surrounding Posse D.C. as a cost for the college.

“It’s symbolism, it’s not money,” Fernandes said. “If we dissolve the Posse program then we’re saying symbolically–what are we really telling the outside community about what we care about versus what we’re paying lip service to?”

Dubischar said the most helpful thing students can do is to demonstrate the effect the Posse program has beyond the 80 Posse students at the college in any given year.

Non-Posse students, including minority students and a member of the LGBTQ community, spoke up at the forum, saying that they felt support from Posse students on campus because of Posse students’ ability to accept diversity and find community.

Mason Keel ‘18 and Anya Kelly ‘16 both said they fit the profile of what may be considered by some as a “typical” student at Lafayette, adding that they are both white and in Greek life. But Posse is still a support system for them, they said.

If the college decides to go through with the recommendations proposed by the presidential working group, Dalé Russell ‘16, a member of Posse D.C., said, they are showing minority students at Lafayette that Posse students are replaceable.

Brianna Braswell ‘16, another member of Posse D.C., said that even the recommendation to phase out the group makes her question if the administration thinks she is “worthy” to be at Lafayette. Through tears, she said the whole process has taken her focus away from her education in her final semester.

Some students pointed to larger concerns regarding race on campus. They said campus was segregated and that they have faced discrimination at Lafayette.

MacDonald responded by saying that if this is the case, then there are bigger problems that need to be addressed at Lafayette.

“There was a comment shared that the college doesn’t care about diversity,” MacDonald said. “That was, I guess, the toughest moment because I can point to so many things that shows how committed the college is to creating a diverse environment.”

He went on to describe admissions’ efforts to increase the amount of students with diverse backgrounds at Lafayette.

“The fact that we’ve doubled our applicant pool of domestic students of color in the last five years, I don’t know if people recognize how difficult that is to do,” he added. “We’ve received applications in the last year from 600 high schools that have never sent an application to Lafayette before. That’s hard work. That’s relationship building. That’s a commitment to diversity.”

Editor’s note: In the print version of this article, the first paragraph reads, “Roughly 100 students, faculty and staff attended what turned into a 3-hour long open forum Wednesday full of high emotions, pointed questions and frustration. The forum, which was hosted by two faculty committees, was on the decision to reallocate funds from Posse D.C. to need-based financial aid.” It should read “recommendation” instead of “decision.” This version was edited to reflect this change.