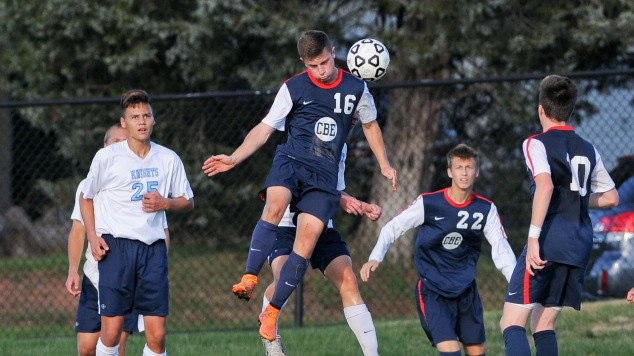 Rachel Robertson: How did it feel to be named PA Gatorade Player of the Year?

Evan Vare: It’s a special accomplishment for me and my teammates. It’s a great accolade for me to win but I couldn’t have earned it without them and their help along the way. I was excited to receive it. It’s such a prestigious award.

RR: Did you know you were being considered?
EV: Kind of, I knew my parents and coach mentioned it but I didn’t know the extent to which they were pursuing it for me. So when I won it was special.

RR: What was your reaction?
EV: I woke up and went down for breakfast before school. It was released at 8 o’clock in the morning… my name was up. I was at a loss for words at the moment.

RR: What’s next in the process?
EV: There are 50 or so other kids from the other states and then they pick a national winner.

RR: What exactly did you win?
EV: That afternoon I got a Gatorade Player of the Year bag and water bottle. My school gets a banner to put in the gym that says, “Evan Vare- PA Player of the Year” from Gatorade.

RR: Are you an unofficial spokesperson for Gatorade now?
EV: Hopefully. Hopefully, free Gatorade for life.

RR: Have you heard anything from the Lafayette team on your award?
EV: Coach Bohn [and other coaches] all contacted me to congratulate me. That was special and I know they are proud of me. They can’t wait for me to get up there this summer.

RR: Your high school team [Central Bucks East] went undefeated and won the AAA State Championship. What was that season like?
EV: We were the heavy favorites in the state to win it all this year. We knew we had a target on our backs from the beginning… We went step-by-step, game by game through it all. It fell into place and just happened… We just got a new stadium so the senior class will never lose in that stadium and it was our coach’s last year too, he was retiring. It was like what else could possibly be better than that.

RR: What do you feel will be the biggest transition to college soccer?
EV: I know the speed of play is a lot quicker and obviously there’s huge dudes and stuff and I’m not the tallest guy. It’s going to be a lot more physical but I’m up for it and I’ll be ready. It’s just a different kind of game than club and high school.

RR: Do you have any goals for freshman year?
EV: I think my main goal is to get a lot of playing time and possibly start. That’s what I’m really shooting for and I hope I can get on the field and put in minutes for the team and contribute.

RR: Did you play any other sports besides soccer growing up?
EV: I played basketball until eighth grade. I stopped because soccer had to be number one sport. I had to put all my time and effort into [soccer]. It was worth it.

RR: What makes you a great soccer player?
EV: The ability to finish the ball is a tough task and not a lot of people can do it. I have a knack for finding the back of the net. Also, assisting and your work rate has to be tremendously high. You can’t slack off. Just keep working.

RR: What can Lafayette fans expect to see when you suit up next year?
EV: I’m a real fast player. I get up and down the field. I’m exciting to watch I would say. I’m shifty and do a lot of moves, but also simple when I need to be. I don’t like to be over-dramatic with the ball—I just want to get the job done.

RR: Why soccer?
EV: I have three older brothers and ever since I was little that’s what my whole life was based around. They would be playing in the backyard, in the basement. Before I was old enough to play, I would watch them and wish I could play with them. Having three older brothers like that really made me love the game.

RR: What do your brothers think about their little brother winning this award?
EV: They are real happy for me and my oldest brother said to me that he even looks up to me even though I’m the youngest brother so that was nice.

RR: Words of wisdom/favorite quote?
EV: It’s probably cliché but, “Never give up.” Also, “Prove them wrong” because my dad said throughout the recruiting process when a big time school would turn me down he would just tell me to prove them wrong. That’s really motivated me.