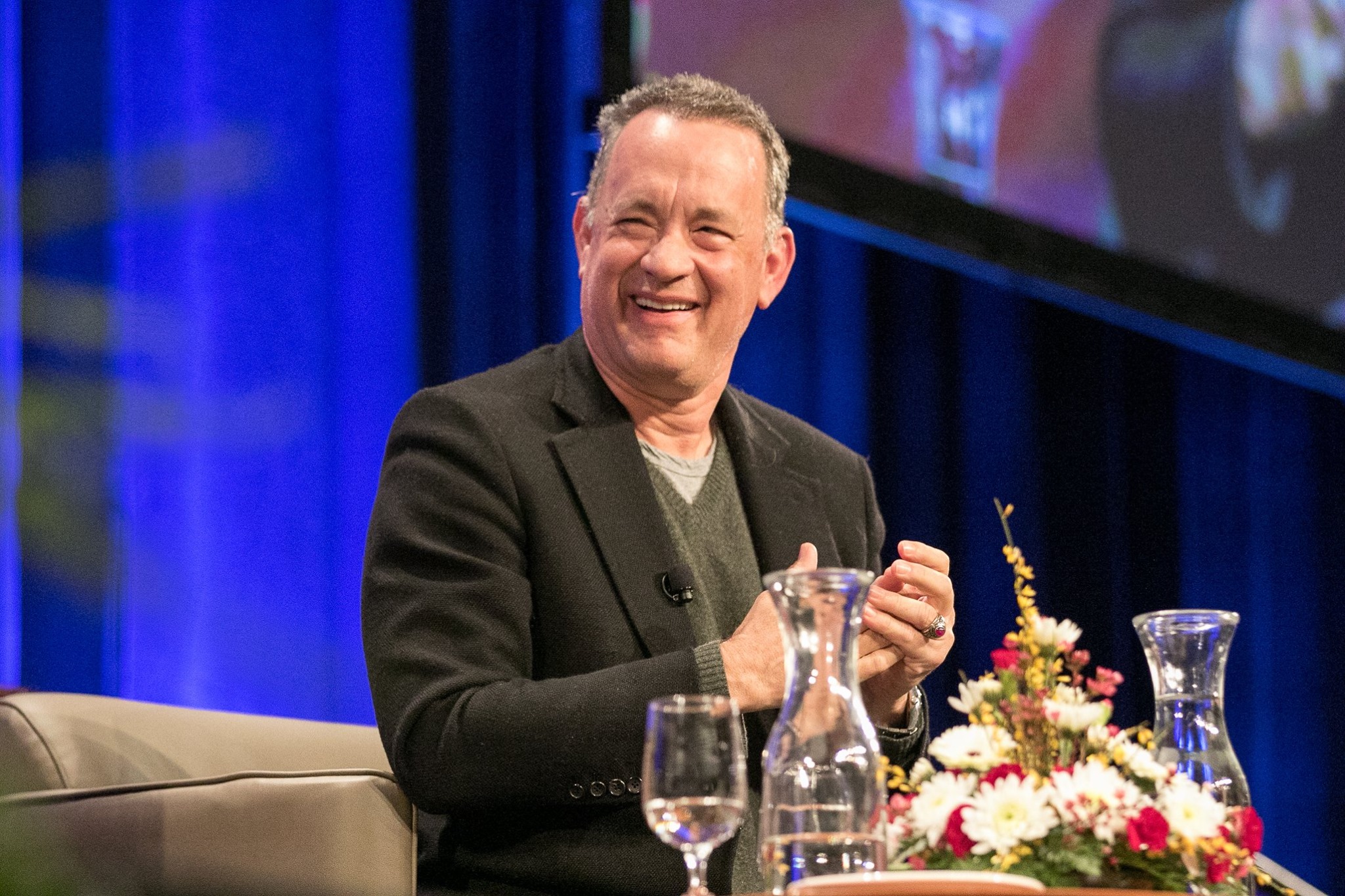 Twenty of professor Donald Miller’s students sat, patiently waiting, in Kirby Library. Some of them had woken early that day, too nervous to sleep. It was 10:15 a.m. The clock on the wall above the exit was broken–as if time was standing still. It wasn’t your average class meeting.

Academy Award-winning actor Tom Hanks had come to the college the day before. And now Miller was bringing him to class.

Hanks and Miller, who are currently working together on an HBO adaptation of Miller’s book, “Master’s of The Air,” sat together and had an informal talk with students. Hanks also starred and worked with Miller in the HBO shows “The Pacific” and “Band of Brothers.” While Hanks was relaxed and charismatic in a crowd of 1,700, he opened up even more in the more intimate setting.

“So what should we do?” he asked as he entered the room. He followed by answering student questions, the likes of which ranged from academically grounded ones about historical circumstances to curiosity about his cameo in Carly Rae Jepson’s “I Really Like You” music video.

Hanks seemed comfortable with the different questions. Although he has not had the same academic upbringing as students at Lafayette have, he was able to relate to students in the class on a personal and intellectual level.

At the talk on Monday night, Hanks told the audience that he applied to three universities after he graduated high school: Yale, Villanova, and MIT, hoping for nothing more than a sticker for the back of his car. He ended up at junior college and, later, California State University, Sacramento, but never graduated.

On Tuesday, he wore a class ring on his finger, but Hanks said did not come from an actual university.

Hanks said his wife made him the class ring in place of a wedding band. After wearing one for multiple movie roles and having to give it back each time at the end of filming, Hanks said he wanted a ring for himself. So his wife made him one and inscribed his children’s initials on it.

This desire for a class ring hints at Hanks’ love of learning. President Alison Byerly, who spent a significant amount of time with Hanks throughout his two-day stay, said he displayed an “intellectual curiosity” that was fitting with the college.

Hanks, who considers himself a “lay historian,” said he has always been “attracted to the details of history.” This interest influences the films he chooses to act in and create, as well as the way he goes about researching his characters.

Finding the excitement in history is something that Hanks and Miller have in common.

“You have to take the known and make it unknown,” Miller said.

Even for his fiction films, Hanks said he searches for authenticity in all of his characters.

“The movies I’ve always been attracted to…the ones that stay with me, are ones that capture true behavior,” Hanks said Monday.

This authenticity, he said the next day, is even necessary for films with animated characters, like the popular franchise “Toy Story,” which starred Hanks as the character Woody.

“Woody goes through these real emotional turns,” Hanks said, adding that he cried at the screening of “Toy Story 2.”

Hanks went on to do a Woody impression for the class, illustrating how difficult it is to do voice acting in comparison to live-action.

When asked questions, Hanks usually answered with stories. One student asked him about “Bosom Buddies,” one of his earliest works, and Hanks chuckled. While he is able to laugh it off now, he did not always take the show so lightly.

“[I] never made a dent when I was [living] in New York,” Hanks said. “I was on unemployment and had a terrible little apartment.”

Then he moved to Los Angeles to be on “Bosom Buddies.” After two years, the show was cancelled.

“At that point I was on a show for two years,” he said. “No one paid any attention to it. It wasn’t a hit. It was just kind of on. We made it an extra season so I got a nice raise. Next thing you know, I’ve got two kids, I’m in L.A., I’m unemployed, the show got cancelled. I don’t know what’s going to happen next.”

Hanks said that for a long time, he was afraid to say no to roles because he didn’t know when another one was going to come along.

Now, Hanks said, he doesn’t have to accept every role that comes his way.

But he didn’t say no to being cast in Carly Rae Jepson’s video for “I Really Like You,” despite the fact that it would mean missing a “Saturday Night Live” party the night before, with members of U2 and other celebrities.

“I didn’t even know who Carly Rae Jepson was, but my wife did,” Hanks said. Jepson’s agent couldn’t find anyone to be in her video, so Hanks said if he liked the song, he would do it.

“The next thing you know you’re getting up at 5:45 on the coldest day of the year. I mean it was brutally cold,” he said. “It was right after the Saturday Night Live 40th anniversary TV broadcast. They went off and had the greatest party in the world…and I had to say I can’t go to the party because I have to get up and shoot a Carly Rae Jepson music video.”

Even if Hanks didn’t recognize Jepson’s name immediately, he still has some insight into how millennials think. He stayed after Miller’s for a few minutes to leave time for selfies. Students flocked to the front of the room.