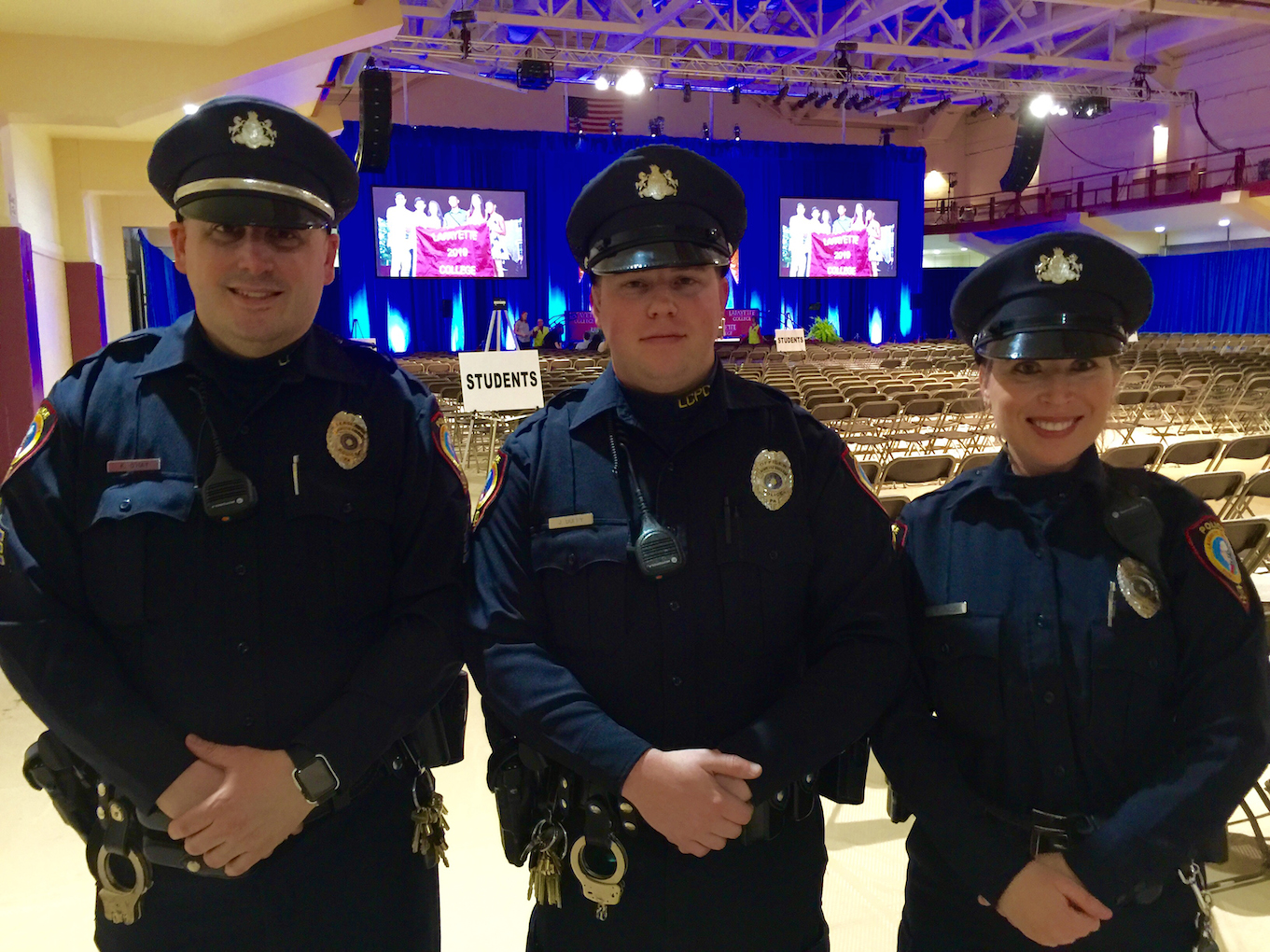 This Monday, students, faculty, administrators and alumni fixed their gaze on Tom Hanks as he gave an informal talk with President Alison Byerly and professor Donald Miller of the history department. But police officer Joe Duffy, of Lafayette College Public Safety, was watching something else—the audience.

As security for Hanks, Duffy scanned the crowd for signs of disturbance. He watched how the audience was moving, where they were going and whether they were standing or sitting.

Duffy was not the only person on duty for Hanks’ visit. According to Associate Director of Lafayette College Public Safety Jeff Troxell, Hanks’ visit was a coordinated effort between public safety, Development, Communications, Facilities Operations, the President’s Office and Bear Security. Easton Police also acted as security for Hanks, though the majority of security came from public safety, Troxell said.

While Hanks is not the most high profile person to come to campus, the process of getting him around safely was still a significant undertaking that took planning, Troxell said.

According to Duffy, the Office of Lafayette College Public Safety was planning for Hanks’ visit since the day they found out he was coming to campus. While Duffy said that officers treat security for most big events similarly, he did say that people were excited for a high profile person to come to campus.

One such person was security officer Cathy Snyder, who has worked security at Lafayette for 18 years.

“When the news came that he was coming, I just about jumped out of my skin,” Snyder said.

Snyder was on call on Monday night and did not work security at the event. However, she did work security for Hanks the next day, as he gave a talk and ate lunch in Kirby Hall of Civil Rights. She said Hanks was “personable” and “very kind” to her in their interactions.

“When he left it was pouring buckets out of the sky,” Snyder said. As she held the door open for Hanks and Byerly to leave Kirby, Snyder said Hanks looked at her and said “you poor thing,” noticing that she was soaked with rain.

With Hanks, it was difficult to remain professional, Snyder said.

But, she said it was her job to stay calm.

“We wanted to make sure that everything went smoothly for him and he was protected,” Snyder said. “His

safety was a priority for us.”

As a security officer, Snyder does not carry a gun, but said she has been trained in martial arts for 15 years. In her time at Lafayette, Snyder said she has also met celebrities like Bruce Springsteen, when he took a private tour of the college with his son.

Troxell said that for more high profile guests, like political figures, the Secret Service is often used as security. He declined to discuss exact details of Hanks’ protection plan because, he said, public safety uses similar plans for other high profile guests.

“In my mind, a good protection plan is one that kind of happens low key,” Troxell said, adding that he saw Hanks’ visit as a success for public safety.