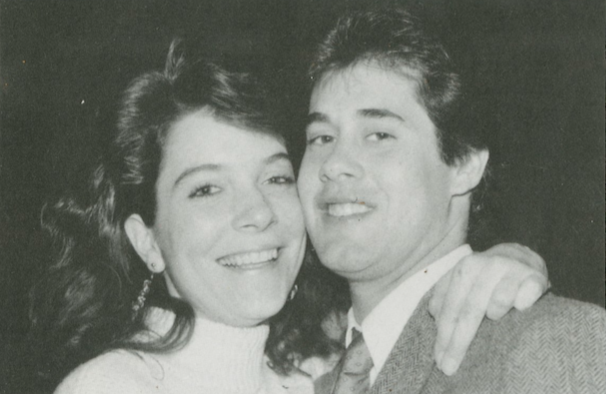 Yearbook photos from 1988 at the 100 Nights Dance. [Photo courtesy of the Lafayette College ]

Tracing the 35-year legacy of the college’s biggest party

Seniors, grab your best bow-ties and polish your leather pumps, because the 100 Nights dance is back for its 34th year this weekend at the Steelstacks in Bethlehem.

This weekend will celebrate the remaining 100 days and nights before commencement in May.The dance is a tradition that has withstood the trial of time, since its first known occurrence in 1982 when it took form as a party that was held in The Bergethon room in Marquis Hall.

Associate College Archivist Elaine Stomber‘89 attended 100 Nights when she was a senior.

“I heard everyone talking about it. It was sort of a big deal,” she added.“Even as a freshman, you knew it was going to be a big event during your four years.”

But Stomber had no recollection of dances that occurred before her first year at Lafayette.

The first mention commemorating the last 100 nights before graduation dates back to 1978 in the The Lafayette newspaper archive, according to Stomber. It is in a small text box in the newspaper, which reads,“Seniors Take Heart–100 Days until Graduation.” There is no further mention of an event taking place to celebrate the milestone, however.

Congratulations on one-hundrednights to graduation continued to be mentioned in The Lafayette. College Hill Tavern congratulated seniors in 1981 in a small advertisement that reads,“100 Days to go!”

But it wasn’t until in January, 1982, that a personal advertisement for a “100 days party” was published. It invited seniors to “Start the countdown” on Feb. 19. Another advertisement appeared for that same partyless than a month later posted by a student committee named the“100 Days and Counting Committee.”

The next year the event named “100 Days Celebration” was suggested to student government. Its popularity soared over the years, with one 1985 ad in the newspaperreading, “100 Nights were great, Deb, Sandy — great job. Sunny– fun spin. Let’s do it again at 50 nights.”

Although Stomber was accustomed to this tradition from word of mouth during her first year, the dance wasn’t officially recognized by the school until 1989, when it was allocated funds, according to Director of Student Involvement Kristin Cothran.

Since then, the dance took on different names and places. In 1990, the dance was called “99 Nights.” In 1991, the dance returned to its original name,“100 Nights,” and for the next seven years the event took place in either Marquis Hall or the Alumni Gym at Lafayette College.

After 1997, the event took place at a variety of locations in the Lehigh Valley, including the Forks Eagle Lodge in Forks, the Americus Center in Allentown and The Almond Tree Manor in Alpha, N.J.

For unknown reasons, the dance returned to Marquis Hall from 2005-2014. Within that time span, students garnered attention from college administration as to the type of experience they wanted as senior year students.

According to a letter to the editor from The Lafayette in 2007, “100 Nights Goodbyes no longer ‘good buy,’” Ian Driscoll complained of over a $35 ticket and claimed that the price of the ticket alone didn’t live up to what the event should be like for seniors.

Since then, the design of the celebration has changed.

When Cothran started as thedirector of student involvement in 2014, she conducted survey with the seniors of 2014. Cothran with the Senior Year Experience Committee designed a celebratory weekend for the last 100 Days and Nights. The event spans over the course of a weekend, whereas previous 100 Nights celebrations only lasted for one night.

“Students felt like, because it was alcohol, focused that some students didn’t want to go to a dance with alcohol,” she said “This wasn’t every student but as someone that does events for the entire senior class I had to be mindful of everyone and what their interests are.”

The 100 Nights dance is now a part of a series of events that salute the last 100 Nights and Days before graduation with events that capture a wider array of interests.

View all posts by Kathleen McFadden →