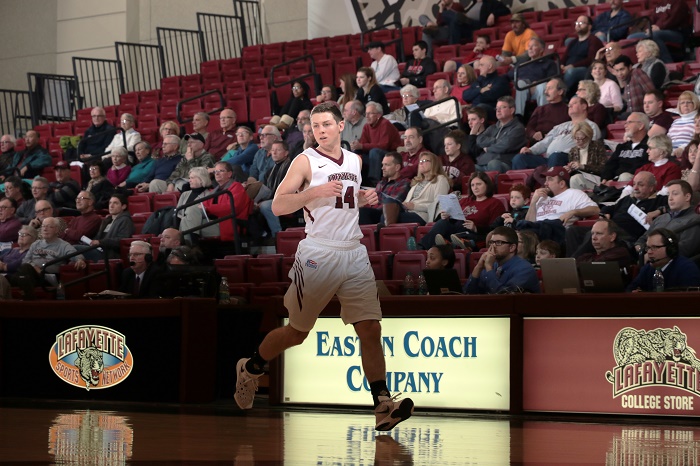 While the rest of the student body was traveling the world or relaxing with their families over interim, the Lafayette basketball programs were busy setting records, as three new athletes joined the 1,000-point club.

Senior Bryce Scott and junior Nick Lindner of the men’s team, along with senior Jamie O’Hare of the women’s team all reached this milestone within the last two months, becoming the 42nd, 43rd and 18th players to do so in their respective programs.

“It’s an honor, absolutely,” said Scott, who accomplished this feat back on Dec. 9 against Fairleigh Dickinson.“It’s a special honor to be a part of the 43 other members on that list. They all came from just the great coaching and the great basketball culture that our coaches and the school has brought up.”

Scott entered the game against FDU just 20 points shy of the record. Despite a slow start, he finished the game as the second leading scorer with a total of 22 points.

“I didn’t even know I was that close until right before the game,” Scott said. “So my mental approach was the exact same as it always is – I just wanted to win. When I scored I honestly didn’t even know I’d made it to 1,000 points until I heard the crowd.”

Despite being a leader and go-to player this season, Scott hasn’t always been the high scorer for the team. The four-year starter has seen shifts in his role over the years, something head coach Fran O’Hanlon attributes to Scott’s selflessness, positive attitude and strong defensive skills.

Lindner joined Scott in his accomplishments a little more than a month later on Jan. 16 against Navy when his game-ending 15 points pushed him past the mark.

“It was pretty fun,” Lindner said. “It’s nice to see our hard work pay off. It was fun to see my parents’ reactions – they were just happy and proud.”

Like his fellow co-captain, Lindner wasn’t distracted by the thought of scoring 1,000 points, but was instead focused on the Patriot League win at stake.

As a junior and point guard, Lindner’s feat is somewhat of an anomaly.

“First of all, when you talk about Nick, he brings a work ethic,” O’Hanlon said. “He’s just such a hard worker. So much of his success is predicated on the fact that he outworks people.”

According to O’Hanlon, Lindner may be the only point guard in his tenure to reach 1,000 points.

“He has improved his shooting over the years that he has been here,” O’Hanlon added. “He has improved in every aspect, and it’s nice that our co-captains got their 1,000th point this year.”

The men’s program has been fortunate enough to have five players reach this milestone within the past two seasons –- all five of whom were starters on last year’s Patriot League championship team. Lindner and Scott join their former teammates, Seth Hinrichs, Dan Trist and Joey Ptasinski, in the achievement.

According to O’Hanlon, Lafayette’s aggressive, up-tempo style of play allows more players to reach 1,000 points in their career.

“In this offense, positions aren’t really as important,” Lindner said. “I think everybody has to be ready to make the play at the right time. You know for myself sometimes it’s scoring, sometimes it’s facilitating, other times it’s defense. I just go into every game thinking what can I do to help the team win and just try to make the right play from there.”

According to O’Hanlon, Lafayette was the only team in the country last season with three 1,000-point scorers in the same graduating class.

“Obviously it’s always kind of in the back of your mind,” Scott said of the achievement. “Especially when you see the people ahead of you attain that, and it’s something that you would always love to have happen. It’s just the cherry on top of a really fun four years.”

O’Hare reached her career high on Jan. 9 with a home win over Boston University. Just 12 points shy of the goal, the senior shooting guard went into the Patriot League matchup conscious that she was close.

“The BU game I was definitely nervous for,” O’Hare said. “It did put a lot of pressure on me and I did just want to play the game, because we still needed a win in the Patriot League, so that was more important. But it was affecting me a little bit.”

Like Scott and Lindner, O’Hare has started since her freshman year, switching between point guard and shooting guard according to the team’s needs. Head coach Theresa Grentz attributes O’Hare’s success to her character and professionalism.

In her first year as head coach, Grentz said she consistent relied on O’Hare’s physical and mental drive, and playing her more than she should.

“She has a motor, and it’s going, and if you look at the stats you’ll see that she plays an enormous amount of minutes for us,” Grentz said. “That’s almost unfair of me to do that to her — to play her that long — but that’s the way it is. I’d love to change that a little, but she’s going to play.”

O’Hare has been the program’s go-to player for most of her career and adjusted to whatever role was necessary.

O’Hare’s accomplishment had her reflecting on her past four years as a college athlete.

“I just want to end my senior year on a good note,” O’Hare said. “Make sure that we keep fighting and win as many games as we can…it’s weird if this is going to be my last year playing basketball, so I just want to give everything I have.”

With both team’s seasons more than halfway done, both players and coaches are looking forward to the postseason as February quickly approaches.