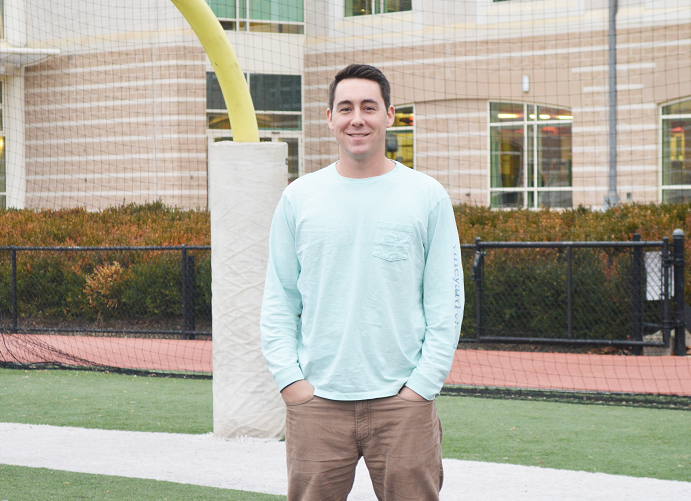 While his teammates were preparing for the 151st anniversary of Lafayette’s rivalry matchup against Lehigh, backup quarterback Blake Searfoss was helping a 48-year-old cancer patient tackle greater obstacles.

Instead of spending the team’s bye week on the practice field, the junior from Flemington, N.J. spent his time traveling to and from the Redi-Care Medical Center in Easton where he received a number of injections to prepare him for his upcoming peripheral blood stem cell donation, or PBCD.

In September, just four short months after entering his information into the registry, Searfoss received a phone call notifying him that he was a potential PBCD match for a man with Leukemia.

According to Searfoss, all potential matches who agree to continue with the process then have blood testing done. A short time later Blake received a second phone call confirming that he was the right match for this patient.

According to Be The Match, only one in 540 registered donors will get that second call.

After Searfoss agreed to donate, doctors suggested they set a date sometime in early November, which would conflict with his football schedule. After some debate, Nov. 12 was settled on.

“I didn’t want to wait until after the season because I didn’t want to drag it out for the patient obviously,” Searfoss said. “So I set it up for the Thursday during our bye week because the shots started Sunday. Once you start their shots you’re not allowed to participate in physical activity.”

Searfoss is referring to a series of injections given to donors before the procedure, which help raise blood stem cell count. These injections are administered over a five-day period and can cause flu-like symptoms.

Searfoss admitted to feeling some of these effects, but found most of the process painless.

On Nov. 12 Searfoss traveled to Philadelphia with his family for the procedure. According to Be The Match, blood is first moved from one arm into a machine that separates and collects the blood-forming cells. The remaining blood is then returned to the body through a needle in the other arm.

“It was crappy,” said Searfoss of the six-hour process. “But if you put it into perspective, with the other person you’re donating to, it’s not that bad.”

The Searfoss family is unfortunately familiar with the Hahnemann University Hospital in Philadelphia where he donated. Searfoss’ older brother, Kyle, was born with Neuroblastoma, and his family spent the majority of Kyle’s childhood traveling back and forth from their home in New Jersey to the hospital. Thankfully, Kyle has been cancer-free since he was six.

“It’s not like I was alive when it was happening and knew what we were going through,” Searfoss said. “But I just understand that fight and that struggle, and I feel that if I had an opportunity to help out I would do so because I’m a healthy kid and I haven’t dealt with adversity.”

Searfoss was back practicing just two days after the procedure and claimed he felt 100 percent for the Laf-Lehigh game the following weekend. In the media luncheon prior to the rivalry game, Tavani called Searfoss a “true hero,” emulating the thoughts of the entire Lafayette program.

Per Be The Match protocol, donors may not contact the patients until a year after their initial donation, but Searfoss is excited by the possibility of eventually meeting the man he has helped.

“That’s something that I would definitely want to do,” Searfoss said. “Because if it ends up working out and I end up saving his life—I think that’d be pretty cool to meet the person.”

Since starting the campaign six years ago, Tavani has had three players match with patients and donate: 2011 graduate Erin Murray, Searfoss, and sophomore running back DeSean Brown, who is currently in the process of donating.

After finding out mid season that he was a potential match, Brown went through the same progression as Searfoss, but plans to donate once he is home for winter break. Similar to Searfoss, Brown will be donating to a 47-year-old man with leukemia.

“Sign up,” Searfoss said. “You may feel weird about it now but…to save someone’s life is something that not many people get to do.”