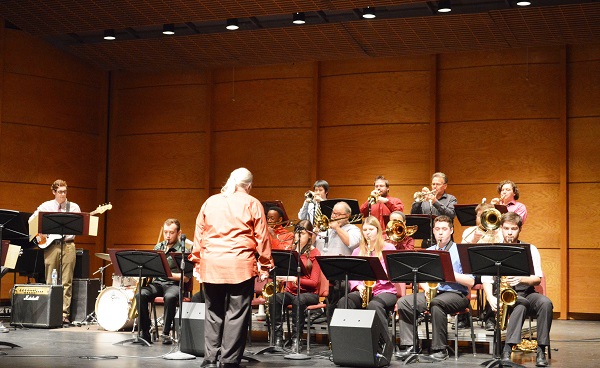 Lafayette College’s Jazz Ensemble took the stage on Wednesday to deliver a selection of music to move the heart and shake the soul.

The ensemble, directed by Skip Wilkins, performed a wide variety of exciting and moving pieces, opening with a quick-paced rendition of Seymour Simon’s “All Of Me”arranged by Billy Byers. It’s loud brass and rhythm set the tone for the first half of the show.

Three of the first five pieces featured piano solos by James Andreacchi‘17, who remained animated throughout the evening. He and the rest of the rhythm section, featuring Chris Ulyett’17 on guitar, Grant Kempski’16 on bass and Tyler Schwartz ’19 on drums, dominated the solos of the first half.

The first half of the performance featured, in addition to the opener “All of Me,”a rendition of Steve Brown’s “A Piece of Cake,”“Two Birds, One Stone,”Matt Vashlishan’s“Placebo”and Bill Pott’s“Big Swing Face”as the finale. “Big Swing Face”was the largest piece of the first half of the evening, featuring solos from Andreacchi on the piano, Ethan Luxemburg ‘18 on the tenor saxophone, Kentaro Mori ’19 on the trumpet, Cara Abecunas’17 on the soprano saxophone, Sean McAnally on the trumpet and Ken Mease on the trombone.

The second half opened with Cal Lewiston’s arrangement of “My Romance”by Rodgers & Hart before the introduction of guest saxophonist Neil Wetzel, who soloed on each of the remaining five pieces, including his own “Los Zapatitos,” a piece by Lafayette’s ensemble entitled “Head Chart,”Vern Sierlert’s arrangement of “Like Someone in Love”by Burke & Van Heusen, Mike Tomaro’s arrangement of TheloniousMonk & Cootie Williams’s“Round Midnight,”and an arrangement of Tadd Dameron’s“Hot House”by Eric Richards.

According to his website, Wetzel is an associate professor of music and the Hurd Chair for Art and Music at Moravian College. He is the author of “Learning Jazz Language,”a book for teaching beginner jazz improvisation. He is the director of the big band at the KarelVelebny Summer Jazz Workshop in the Czech Republic.

As The Lafayette previously reported, Skip Wilkins has performed in thousands of shows across Europe and America. He is a member of TRIO WUH alongside bass player FrantišekUhlířanddrummerJaromírHelešic. HebecameLafayette College’s Jazz Ensemble Director after the death of Rick Chamberlain in March.