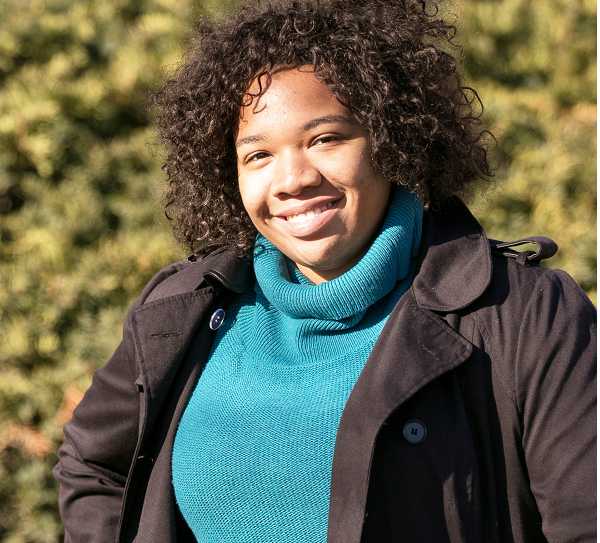 L’Eunice Faust ‘17 was at her rugby team’s first international tournament in Canada when she got the call. “Good evening, Madam President.”

Aaron Little ‘16, the current Lafayette College Student Government president, was calling to congratulate her on winning the election.

Results released to students on Nov. 23 showed that she had won the presidency with 56 percent of the vote. But the decision to run in the first place was not an easy one for Faust.

“I told all of the executive board of student government that I wasn’t going to run,” Faust said. Initially, she was concerned about how she would balance her GPA, her job as an RA, her personal life and her commitment to the clubs she was already a part of.

Ultimately, Faust decided that she could do more good for the clubs she was dedicated to if she left them in the hands of other capable people and ran for student government president instead.

“The community that I really want Lafayette to be isn’t here yet and I felt I owed those clubs something,” Faust said. “If I have the chance to run to be president, then why not? Why not put myself in a position where I could help Lafayette be the place where it was promised to be?”

This type of community, for Faust, is one of inclusivity.

“Lafayette is an awesome place. It’s honestly my second home,” Faust said. “But it’s not a second home for everybody. And it should be.”

Part of her initiative to expand inclusivity on campus is to reinstate the multicultural affairs committee, a part of student government that makes sure the voices of multicultural organizations on campus areheard within the group.

“It makes sense due to all the protesting that’s been happening within the last two years,” Faust said. She added that she hopes to continue the diversity conversation that student government recently had with Kaleidoscope, a social justice group on campus.

Faust also plans to work with Greek life to examine their recruiting process to see how it can be more inclusive.

“[I want] to say how do you usually go about recruiting, and how can we make this seem less daunting for people who may not fit the stereotypical sorority or frat persona?”  Faust said.

The ideas that Faust has proposed stem from conversations she has been having outside of student government for years.

“She’s very much about inclusivity and that’s something we talk about in our dorm,” said Faust’s former roommate, Feevan Megersa ’17. “She’s one of those people that will go out of her way to learn about [other people’s] culture.”

Megersa, who’s from Ethiopia, added, “In a lot of her conversations, she’s [said] she wants to make international students more visible on campus.” For Megersa, Faust’s dedication to inclusivity is one of her biggest assets as student government president, along with her ambition and determination.

For Taaha Mohamedali, her admissions counselor, it is Faust’s emotional intelligence that will resonate with students.

“Especially during a time in higher education where there is clear structural racism and institutionalized racism that is being felt and pulsed across the nation, I think she’s going to be able to bring a student voice that is very very socially aware, and a depth that I think Lafayette is going to benefit from greatly,” Mohamedali said.

Mohamedali’s first contact with Faust came through a phone interview, which he describes as one of the best interviews he has ever had. While phone interviews can be difficult, because you cannot read someone’s facial expressions, Faust’s bubbly personality and “unparalleled kindness” shone through, Mohamedali said.

It is the same passion and intelligence that she shared during her interview with him that she will bring to her presidency, Mohamedali added.

Faust said she decided to run just five minutes before the student government meeting where nominations were being made.

“I was convinced that she was not going to run,” said Little. “But then I actually passed her a piece of paper during the meeting asking would you go for VP?”

Little said that he wanted Faust to run because he wanted there to be competition, and the way the candidacy was shaping up, it looked like there wasn’t going to be any. But he also wanted her to run because she was impressive to the executive board.

Faust’s qualities that are going to be most welcomed within student government are her ability to collaborate and her curiosity, Little said.

“She is very inquisitive,” he said. “I thought I asked a lot of questions until I met her.”

“Right after the debate last year, when I was running, she held me aside for forty-five minutes afterward asking two dozen questions,” he added.

Faust’s vice president, Othman Guennoun ‘17 said he believes Faust will add a new perspective to student government. Guennoun ran on a ticket with Faust’s opponent, Alienor d’Arenberg ‘18 and said he was “bummed” when d’Arenberg did not win, but that he is still very excited to work with Faust.

“I think it will be the perfect balance of having a lot of experience from my side but also getting a fresh perspective on things,” Guennoun said.

This fresh perspective is met with a dedication to meeting and talking to people.

“I want [student government] to be more personal,” Faust said. “I want people to actually know who we are and we know who they are. That’s what I think are the building blocks to having a community.”

What Faust is most afraid of for the coming year is disappointing the people that believed in her.

“I feel like I have a big responsibility and so I hope I meet everybody’s expectations,” Faust said.

Faust will take her role as president this Sunday at the gavel passing ceremony, a six-hour meeting where members of student government wrap up the year and elect new class representatives.