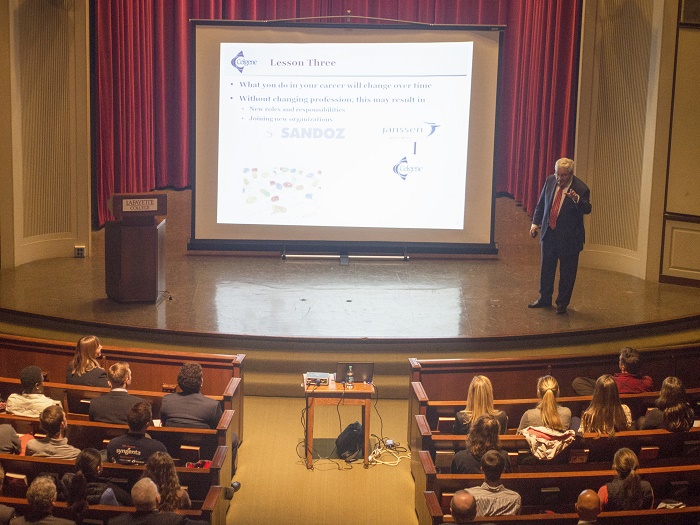 Dr. Jerome Zeldis draws from his life to give career advice

Jerome B. Zeldis,Chief Medical Officer of pharmaceutical giant Celgene and CEO of the offshoot company Celgene Global Health, opened the second President’s Entrepreneurship Lecture by talking about a now-defunct board game he used to always play as a child called “Careers.”

The most important rule in the board game that Zeldis spoke about was that, just like in life, “there can be more than one winner,”and that a player could, at any time change careers.

“If you do not find [your career] is meeting your expectation, then switch to another career path,”Zeldis said. “I was a boy scout and worked as a dishwasher. I discovered I did not like doing it.”

Zeldis, who was recently appointed to the board of Kalytera Therapeutics Inc., proceeded to discuss the different steps he took in finding his own career, drifting from being a historian to being a molecular biologist to, finally, becoming a doctor in the pharmaceutical industry. With each career he brought up a new image on the projector on the stage, but he did not remove any of the ones that came before.

He went on to detail one of the most life changing events of his career: when he found himself the one in the patient’s chair rather than the doctor’s for a serious illness. From that experience of being dependent on the hospital, he feels he learned a lot about what patients want in a drug.

“I found that I’d rather take a pill at home than go to a hospital,”he said. Now, he said, he tries to make drugs that preserve the independence of the patient and don’t make them dependent on doctors or hospitals.

Throughout his talk, Zeldis returned to the idea that one’s career is not set in stone, and that one’s future is always malleable.

“[Your career] is not even final when you retire. It’s only final when you stop breathing,”he said. “Even if you stay in the field your role will change over time…you’ll take on different roles and responsibilities.”

These responsibilities are where his past experiences really helped him shine, he said, talking about how supervisors back from when he was washing dishes made mistakes that he swore he would never make as a leader. However, he cautioned that confidence in one’s ability should never lead to arrogance.

“Arrogance is just certainty combined with ignorance,”he said. “An expert is somebody who knows a little more than the next person.”

The most important thing for one’s career, though, is enjoying one’s work and the people one works with. Returning to his game analogy, Zeldis said that it is important to get along, and to enjoy working, with the other “players”.

“The 18 years I’ve worked at Celgene have felt like four or five,”he said. “[You should] enjoy who you are playing with…if you don’t, you’re playing the wrong game with the wrong people.”