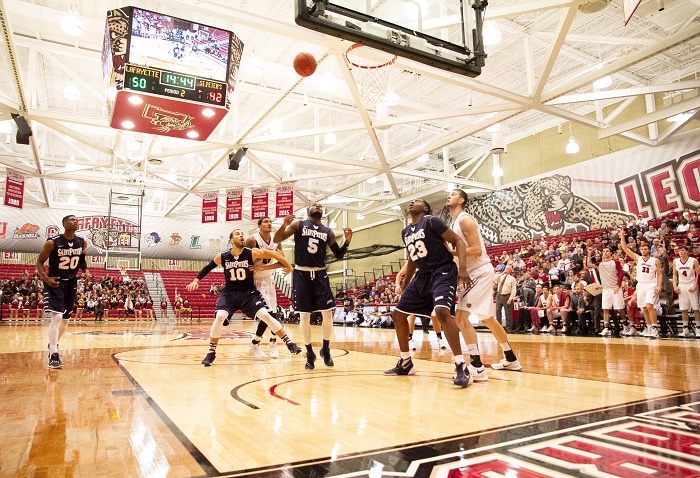 Players stand over the new restricted arc, one of the changed NCAA rules. [Photo by Hana Isihara ‘17]

The game never really stays the same. For the average consumer, basketball may look the same as the year before, and the year before that. But just as playing and coaching styles constantly change, so does the regulation.

Each season, the NCAA looks to alter aspects of the rulebook to both correct perceived issues with the flow of play and to add potential improvements to the entertainment value of what is a critical asset to a multi-billion dollar college sports industry.

This year, as in years past, the intended result of changes to the rules has been to increase the speed of play.

“So they made every change to make the game faster… but what’s funny, ironically, is there are way more fouls now so the game is actually slower,” men’s senior captain Bryce Scott said.

The major focus in this year’s changes has been on fouling—specifically limiting the aggressive, hands-on defense that has defined both the men’s and women’s college game for many years.

Defenders on the court had been able to play very tightly on the opposing player in possession, using hand-checks to physically pressure the player (short of a reach-in or blocking foul) into making a mistake, but this year’s changes have disallowed such aggression.

Now, defenders are reduced to essentially shadowing their opponent, risking a foul with even the slightest contact within a ‘cylinder’ of space—an imaginary tight circle around the toes and heels of the player, extending directly upwards to the player’s head.

In the past, newly introduced defensive regulations haven’t limited the game quite this much, and fellow senior guard Zach Rufer believes this has been an effort to make the game look a little more like the pros.

Senior women’s captain Jamie O’Hare shared a similar view, but remained determined to look past it right from the get-go.

“We either accept it and work with it or we stay frustrated and let it affect our game,” O’Hare said. “I say we accept it, and I think the whole team has bought into that as well.”

While the defensive contributions of guards such as Scott, Rufer and O’Hare are somewhat limited, there is little doubt that the real weight of the new rules fall on the centers and power-forwards who are accustomed to playing especially aggressive and physical defense in the paint.

“It’s clear that the posts have been affected by the defensive changes more than the guards,” O’Hare said.  “They have to be more physical at times compared to us guards and it’s hard to be that way and not foul with these new rules.”

As part of the rule changes five seconds have been subtracted from the previous 35-second shot clock, narrowing the amount of time the offense has to create a shooting chance. Coaches also have been restricted from calling timeouts during the run of play, hindering tactical decisions off the court that can slow the game down immensely.

Timeouts no longer reset the 10-second backcourt clock and any timeout called within 20 seconds of a media timeout automatically becomes the media time-out, giving the game less of the ‘stop-start-stop’ feel that has invited wide criticism in years past. Specifically, in the women’s game, the traditional two halves of play have been divided into four quarters.

With the vast majority of the season still to come, only time will tell if the right coaching and playing adjustments can be made to compensate for such significant changes to the game.