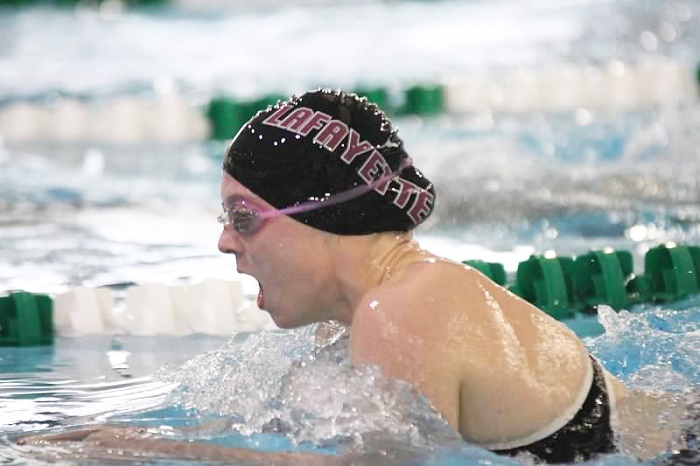 Katelyn Arnold: What was it like to set the school record for the 100 IM as a freshman?

Alexa Overeem: It was definitely really exciting. I was hoping to accomplish something like that in my college career, but it was pretty exciting to do that in one of my first meets as a freshman.

KA: What events do you swim?

KA: What has been the most exciting part of your transition to college swimming?

AO: I think that starting lifting was really exciting because I never lifted in high school. The change in training was something new and interesting and it got me interested in swimming and interested in a different aspect of the sport again.

KA: Were you expecting to make such a significant impact on the program so immediately?

AO: No. Like I said before, I was hoping to eventually set a record in a breaststroke event later on in my college career, but I didn’t expect to do something so significant so early, and I’m pretty excited to see what the future holds for my swimming career at Lafayette.

KA: Looking forward, what are your remaining goals for the season?

AO: A goal is definitely to set the 200 breaststroke record and to take off time in the rest of my events.

KA: Are there any older teammates you look up to?

AO: Stephanie Nickerson has really helped me adjust to the team and Shoshana Hodes has really helped. They’re both juniors and I really looked up to them. They’ve been influential in my swimming here at Lafayette.

KA: Who throughout your life has been the most influential on your swimming career?

AO: Definitely my mom because when I was younger she was always the one to drive me to all of my swim meets and spend hours sitting there watching me swim and cheering me on. She really pushed for me to swim in college so she definitely affected me the most.

KA: When did you start swimming?

AO: I started swimming competitively when I was 8 years old.

KA: Did you play any other sports in high school?

AO: No, but I was on the varsity swim team and a club team outside of school.

KA: What brought you to the Lafayette swim team?

AO: I was mostly looking at schools for academics because I wanted to go somewhere that was a small, liberal arts school with a nice campus environment. Swimming was the second thing I looked at because I knew I wanted to swim but academics always came first. So, I talked to Coach Jim and came on a recruiting trip here.

KA: What has been your initial impression of the team thus far?

KA: What is your most memorable swimming moment?

AO: Probably when I was a freshman in high school. I made sectionals, which is a meet I had been trying to make for so many years. In that moment when I finally qualified for the meet, I felt that everything I had been doing in swimming was worth it. It’s such a big commitment and takes so many hours and to finally accomplish a goal and to make a certain time is a really big and exciting thing.

AO: Not necessarily. I try to just get a lot sleep and eat well in the upcoming week before my meet. I don’t like to think about superstitions too much because it messes with my head.

AO: “Perks of Being a Wallflower.”

KA: If you could trade places with a celebrity for a day, who would you choose?

AO: Probably Taylor Swift because I also play guitar and sing. I think it would be really cool to live her life.

KA: One thing people don’t know about you?

AO: I really like to draw and I had my own gallery showing in my town last year