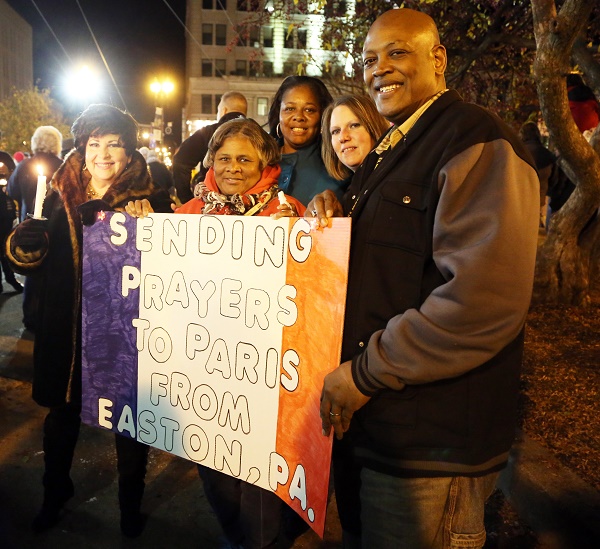 Easton Residents, including Rita Flowers (back), came to the vigil to support victims of the attacks in Paris. [Photo by Christina Shaman ‘16]

In the wake of the shootings and bombings in Paris, when reports of deaths were still coming in, the Easton community gathered at Centre Square to light candles for the city attacked last Friday.

Rita Flowers, an Easton resident, came to the vigil “to say prayers for the innocent victims and to pray that the world comes together.”

The candlelight vigil took place last Saturday, just 24 hours after the news of the rampage reached Lafayette and Easton. Assailants attacked a concert hall, soccer stadium and several restaurants. At the time, 127 were believed to have been killed. Two more have been added to the list of fatalities since then.

“Maybe we can end some of this violence because there’s innocent people that don’t understand what happened or why this is happening,” Flowers said. “I just pray that something changes. I know it doesn’t change overnight. But I just pray for the victims, because there were young people and they didn’t deserve this.”

Pastor Susan Ruggles of St. John’s Evangelical Lutheran Church opened the vigil with a prayer, after which Rabbi Daniel Stein of the B’nai Abraham Synagogue offered a similar words of peace. Aqeel Syed offered ‘The Opening,’ a prayer of guidance from the Quran, on behalf of the Muslim Association of Lehigh Valley.

“As a community, we should show solidarity that we don’t support these kinds of acts in the world,” Syed said. “Wherever it is – Easton, Paris, across the world – these acts are not representative of Islam.”

After Mayor Sal Panto, Jr. spoke to the crowd of about two hundred, he led them in singing “God Bless America.” Lafayette students were in the crowd, along with college faculty and Easton residents.

Panto said the Peace Candle in Centre Square was wired more quickly than scheduled in order to have it illuminated for the vigil. The event was planned the day it happened, beginning with discussion in local restaurant Angelo’s and spreading with an email, Facebook post and word of mouth.

“We should be doing this every day for all the places all over the world where this happens on a constant basis, and we just ignore it,” said Vera Cosgrove, another Easton resident. On the same day as the attacks, there were two suicide bombings that killed at least 43 people in Beirut, Lebanon and bombings in Baghdad, Iraq killed 26. Over that week, 22 people were killed in the Central African Republic.

“We’re paying attention to it because it was France and ethnically people like ourselves, where I don’t think we care when it happens in Iraq or Afghanistan or Pakistan or anything else. It seems very unfair.