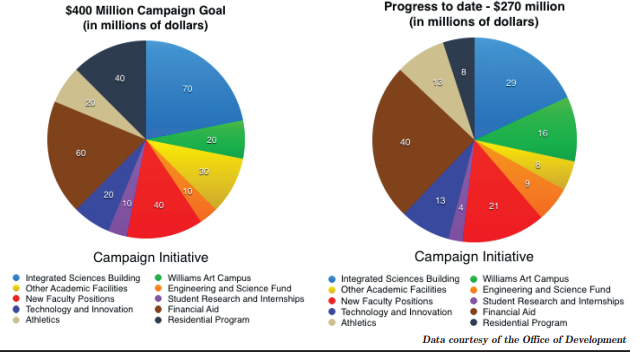 “It’s exciting to think it’s been a whole year since the campaign was launched,” said President Alison Byerly, who has been heavily engaged with the campaign.

“We’re really pleased with where we are,” she added.

When the capital campaign was announced last November, it had already undergone six years of a ‘private’ phase. In that period, about $226 million were raised. Since then, the amount raised totals at about $270 million.

Vice President of Development and College Relations Kim Spang has been spearheading the campaign and said that the campaign is right on target. The campaign plans to fill the gap by collecting $45 million a year, and in the last year, it has collected about $44 million.

Spang said one triumph of this first public year was an increase in the number of donors and value of donations.

“Probably our biggest success is the number of MarquisSociety members [donors of more than $1000], so we saw a lot more people increase the level of their gifts,” Spang said. The number of donors to the Maroon Club, the group that organizes donations to Lafayette Athletics, has also seen its largest increase in the past year, according to Spang. 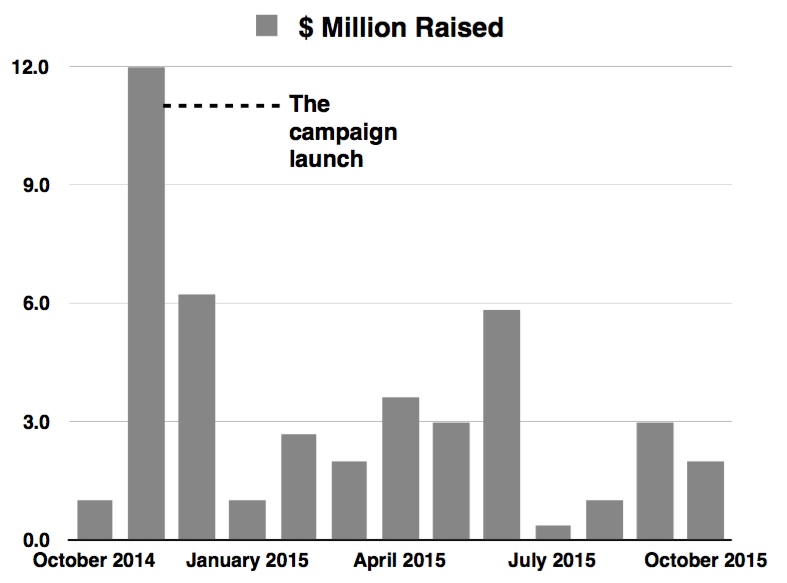 Immediately after the campaign’s announcement, the college hosted campaign dinners across the country, and the Hermione, a replica of the ship the Marquis de Lafayette rode to the U.S., stopped at 11 ports on the Eastern seaboard.

“We did a series of small dinners, of what we call, ‘inside the campaign dinners,’ where a trustee would typically hosted small dinners for say 20 people at the home of a trustee, where we could have dinner, follow-up and talk,” saidByerly, who traveled widely in the past year. “Those were very helpful in engaging people at a high level.”

Byerly said that the beginning of the public phase of the campaign needed these excursions to publicize about the efforts.

“A lot of the early phase of the campaign involved laying ground work in terms of people understanding the campaign’s priorities,” Byerly said.

According to Spang, allocating funds from donations can sometimes take up to a year, since many people like to have their donations directed to a specific area.

“If we can’t necessarily match up the money with what the donor was intending…we will call them and try to find the best fit,” said Spang.

Director of Advancement Services Stephanie Hayes says that she is seeing more restrictions on the places where donations can be spent than before, especially with younger generations of alumni donating.

“People are more restrictive than they used to be,” said Hayes. “[In younger generations], people are less likely to give to unrestricted annual fund, because they can’t see their donation go [to a specific place].”

For example, one donor wrote that their donation’s purpose was “women’s diversity and recruitment in business.” 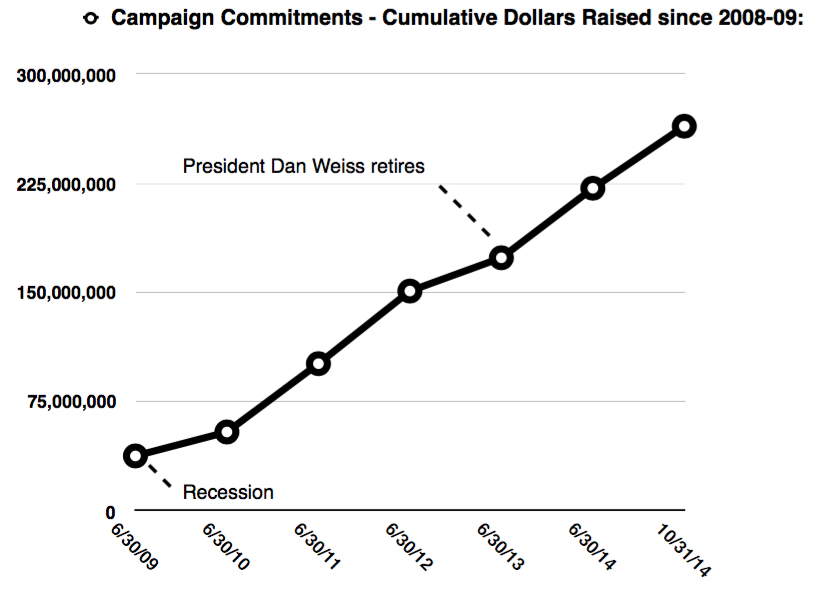 Hayes said she did not understand how the donor wanted the money to be used, so she contacted the donor and discovered that they were working on a project with economics Professor Rose Bukics. They then were able to allocate the money to the economics department so it could be used as the donor intended.

In other cases, however, donations’ restrictions can be relatively vague, according to Hayes.

Until they can figure out the right placement for donations with a vague purpose, the money is held in the campaign account while the development office helps the donor figure out what will be the best use of their money. Hayes says she helps donors figure out “what makes them love Lafayette.”

The money raised in the campaign has been put to use in a variety of ways, from scholarships to housing renovations to funds for a building on the Williams Arts Campus.

According to Spang, financial aid is the area that sees the most support from the biggest groups of people, whether it is through internship funds or scholarships, such as that donated in honor of Brian Keller ‘16, who passed away unexpectedly last summer.

Renovations to the Delta Kappa Epsilon fraternity house was also funded by money raised from the campaign. About $4 million were needed, and the Lafayette chapter raised $1.3 million.

“Even though everything is underneath the umbrella [of the campaign], it’s not sitting someplace. It goes immediately to the area it was designated for,” Spang said.

“[Alumni donate] because they have received scholarship or financial aid or when they went here they understood that [some people around them] needed assistance,” Hayes said, “or they just have means and they want to make sure other people have the same open doors they did.”

Contributors also include faculty, staff, students, parents of students and residents of Easton that have developed a relationship with the college. Spang said that corporations like Air Products in Bethlehem.

Spang said that the initiative to collect donations has begun to involve faculty and students much more in the process of collection to create connections between donors and those who would be receiving the money.

“I see the next wave of events as utilizing our faculty a lot more in hosting and being part of these events on and off campus,” Spang said, “because donors typically want to give to the future as well as where we are today.”

Spang that while the goal of $400 million is attainable, donations may not achieve the goals in individual categories.

“As much as I would want to hit every single one of these targets, and more, we won’t,” Spang said. “The gifts just don’t spread out like that.”

“I feel very good about where we are,” she added, “and I think that if the market continues to stay stable as best as it can…I definitely think we can achieve $400 million by December [2018].”