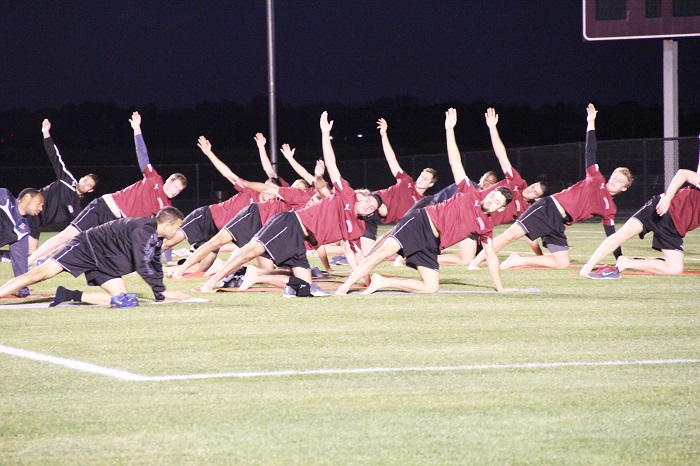 When the Lafayette men’s soccer team isn’t practicing at Metzgar fields or traveling across the Northeast for matches, they can be found in the Kirby Sports Center, bright, pink yoga mats in hand.

For the first time in program history head coach Dennis Bohn incorporated weekly yoga sessions into the squad’s fall season routine. As yoga becomes more and more popular across the professional level, college teams like Lafayette have joined the trend, working to improve their minds, bodies and overall performance.

“The idea behind yoga is it’s supposed to make you be more present in your body,”said Charity Hyde, the team’s yoga instructor.

Hyde meets with the team usually once a week, depending on their game schedule. According to Hyde, Bohn is the first coach of a men’s team that has approached her during her two years as an instructor at Lafayette.

“Guys are tighter in different areas,” Hyde said. “A lot of the athletes I work with have never done a class before –-it’s a very new experience for them…so I’m just trying to get them to wrap their head around it.”

Some members of the squad are far from beginners though. Sophomore goalkeeper Brad Seeber was introduced to yoga while at boarding school and has loved it ever since.

“After the games all of the players who start are really sore,” Seeber said. “After the yoga day you’re basically back to stage one – you’re feeling like you did before the game. You’re not as tired, your muscles aren’t as tight and it just really prepares us for the next game.”

While Seeber is known for his flexibility amongst his teammates, there are others who are teased for their lack of it.

“Brad is amazing at yoga, so we’re on two different spectrums,” said freshman Josh Koval. “I can’t touch my toes, so I’m already at a disadvantage. I have such tight hamstrings and I have back problems as well.”

According to Koval, while most of his teammates look forward to their yoga sessions as a mid-week break, he dreads them.

“It’s supposed to be our easy day and to me it’s not an easy day,” Koval said. “If someone’s struggling they’ll look over to me to get a good laugh.”

Some of the poses Hyde uses are more difficult than others. When a pose becomes too challenging, some players find refuge in one particular resting position.

“Child’s pose never disappoints,” freshman JoshKruczek said. “If you can’t do something you just revert to child’s pose.

Bohn joins his players during every session, making it a full team experience. While many players find the activity relaxing and serene, there are moments when that mood is ruined by the struggles of their teammates.

“It got so bad at one point with my hamstrings that I couldn’t do it anymore,” Koval said. “My feet started cramping, and I started rolling around and it just got to the point where our coach yelled, ‘Josh, just go to the training room!’ Afterwards everyone who saw me just started cracking up because they were like ‘Josh got hurt during yoga.’”

Despite stories like this, the team’s overall reaction to the activity seems quite positive.

“I just think it’s refreshing,” Kruczek said. “Mid-week or after a game, to go out with the team…to recover, not just physically, but mentally as well.”

In addition, Bohn claims that the team’s yoga involvement has been responsible for an overall lack of injuries.

“We went the entire season without any players missing games due to muscle injuries,” said Bohn in an email. “No pulled or strained hamstrings, quads, calves, groins – I don’t think that is a coincidence.”

The squad plans to continue these sessions into their off-season. Hyde seems eager to continue working with the players, and the Leopards are excited to improve.

“I love being connected with the students,” Hyde said. “It’s just fun being around younger people. I’m a mother of two, we have a very busy life…it’s just a mini-vacation for me. I can get out of my head and just focus on what my body is doing in space.”

Koval, who may never be a natural yogi, finds that this activity is great for team camaraderie.

“It gives us a break from the everyday soccer thing,” Koval said. “And I think I do actually help the team bond because… they’re always looking at me for a good laugh, you know like “at least we’re not as bad as Josh.’”