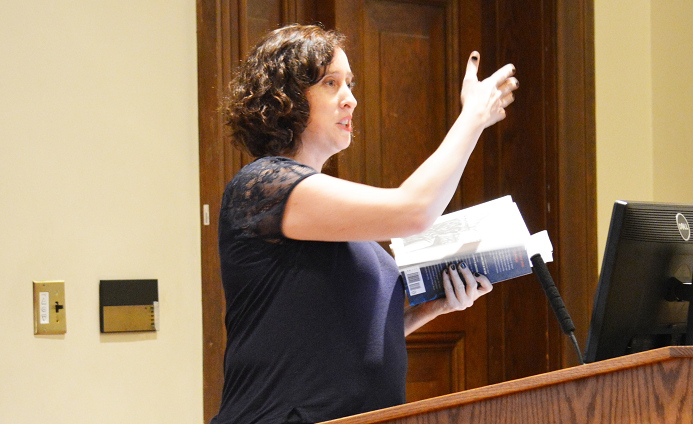 Anya Ulinich reads a passage from her novel. [Photo by Courtney DeVita ‘19]

This graphic novel focuses on Lena Finkle, Ulinich said, who deals with identity issues due to “…her Soviet childhood and her adolescence in Arizona” and, at the same time, her “active romantic search for a meaningful connection.” Astute readers may notice that Finkle’s past strongly mirrors Ulinich’s, who was born in Moscow in 1973 before moving with her family to Arizona in her late teens.

While Lena Finklemay be strongly based in Ulinich’s life experience, she is also heavily inspired by the character Leo Finkle from another novel, “The Magic Barrel,” written by Bernard Malamud in 1958. In “The Magic Barrel,” Leo wonders if he’s ever loved anyone at all and he sets off his questioning of faith.

“I created Lena Finkle as a contemporary update of Leo,” Ulinich said. “She’s a divorced mother of two living in Brooklyn, and Leo is an old rabbi being pressured to marry. Like Leo has doubts of being a rabbi, Lena has doubts about being a writer.”

They both go on their own respectivequests to find true love and meaning in their lives.

Ulinich said she decided to write this story drawn out as a graphic novel to keep everything concise.

“It was actually accidental,” Ulinichsaid.“But as a fiction writer I meander a whole lot. With this, compared to a conventional novel, very little text can fit on a page.”

In order to keep the plot moving, Ulinich had to condense long, extended scenes onto one page.            “That or extend the scene across several pages and get stuck with drawing everything over again,” she joked. According to Ulinich, this story can be interpreted by readers in many different ways.

“It can be a story about true love, crisis of faith and self-devotion,” she said.