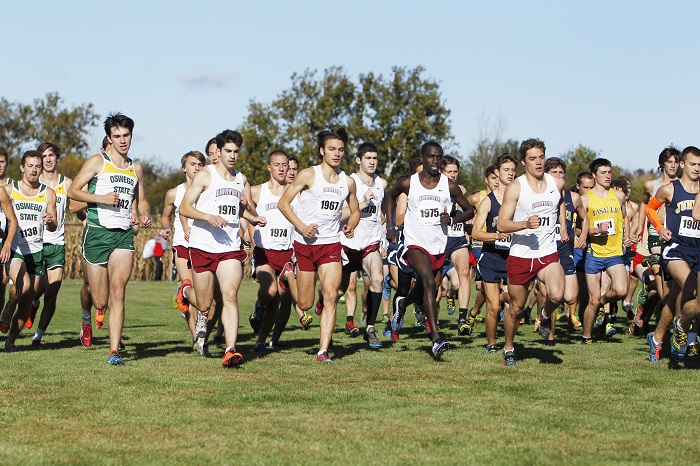 Many envision Halloween as a time when people run from ghosts and ghouls, but the cross-country team was running for a different reason–the Patriot League Championship.

This past Saturday, the team was looking to erase a poor showing from last year as they competed in the conference championship in Hamilton, NY. Unfortunately, their performance was not quite strong enough. The men finished in eighth place and the women finished in ninth place out of ten schools. Navy won the men’s meet, while Bucknell went on to win the women’s meet.

Although the team as a whole didn’t place well, there were a few individuals who stood out for the Leopards. On the men’s side, juniors Andrew Morra and Kelvin Serem helped pace the team for the 8k race.

On the women’s side, freshman Emily Moore paced the team with a time of 23:13.8, which placed her at 43rd overall out of 109 runners for the 6k race. Senior Stephanie Benko was the second fastest Leopard, posting a time of 23:31.2, which put her at 54th overall. The other women included in the top five were sophomore Mikayla Pacilio, freshman Caroline Harmon and sophomore Morgan Nobles. Sophomore Alexa Kwapinski and junior Brigid McGill also competed for the women’s team.

“Overall, I think that our team did well,” Moore said. “We had some girls run on injuries and I think that everyone did a great job of supporting each other and working through the hills.”

Moore, who posted a personal best in this race, came to Lafayette with virtually no experience in cross-country after only participating in track and field for her high school career. Having ran the 3200m in high school, the nearly double 6k race seemed to be a tougher task for Moore at first.

“Cross-country is new for me so this whole season has been a learning experience.  I’ve learned a lot about cross-country and how to run the longer races over varying terrain,” Moore said. “I’m so lucky to have such great coaches and a great team who have really helped me adjust to running in college.”

Like Moore, many of the other runners on the team are proud of their individual performances this year. And as the season winds to a close, although the record may not show it, the team is satisfied in its performance and effort as a whole.

“As a team, our goal was to have a strong group of runners working together in practice and during the races,” Moore said. “I think that we were able to do this well throughout the season.”

With losses to Lehigh and a subpar showing in the Patriot League Championship, the Leopards are still looking for one more shot at victory to make this season a success in the record books. That opportunity is right around the corner as the NCAA District Championships will take place on Nov. 17, in Princeton, NJ.

It is still uncertain which runners from Lafayette will be sent to compete in the championships.