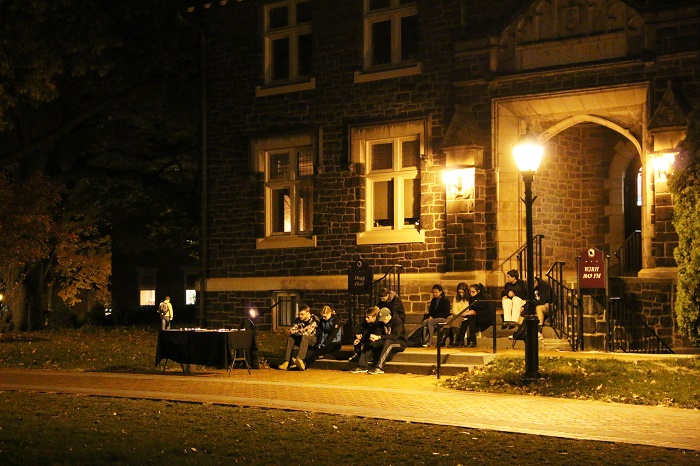 Participants in the vigil outside Hogg Hall. [Photo by Austin Drucker ‘17]

A vigil held by a Christian group at Lafayette Tuesday on the steps of Hogg Hall prompted reactions from students on campus.

The vigil, held by the Lafayette DiscipleMakers Christian Fellowship, was meant to “step back from the bitter politics” about abortion and “mourn the millions of lives lost in recent decades from abortion and miscarriage and other sources of infant loss,” according to a campus-wide email from the group. Students held candles and prayed outside during the vigil.

During the event, the Association of Lafayette Feminists (ALF) and five other students—all of which were members of ALF—created “safe spaces” for women who might have felt uncomfortable with the vigil.

ALF had milk and cookies in the Gender and Sexuality Resource Center in Farinon, and the five other students sat on a blanket on the Quad listening to music softly, keeping their distance from the vigil. They had a sign in front of them that read, “A Supportive Space for Women and Their Allies.”

Student leader in the DiscipleMakers and organizer of the vigil Robert Lowery ‘16 said that the event was not supposed to be political.

“We believe that the unborn are human and alive, and as such their loss is a tragedy,” he added.

But for some it was not only political, but also offensive.

“Them putting a candle light vigil for the aborted babies is almost sending a message that it doesn’t matter why you aborted this baby, you’re wrong for doing it and you’re bad because you killed them or something like that,” said one female student who saw the vigil.

This student, who requested to remain anonymous, has had an abortion.

“I was basically gang-raped and I got pregnant because of it, which is obviously not my fault,“ the student said.

Andrea Coles ’17, who sat on the Quad during the vigil, said, “It was a thinly veiled political event.”

“To make it seem like it was not a political statement they included miscarriages and infant loss and I think that was manipulative and it was a way to make it impossible to effectively protest,” Coles added, also saying the fundamental difference between abortion and miscarriages is that abortion is about the woman’s choice, whereas a miscarriage is the loss of a wanted pregnancy.

Amanda Furtado ‘16, who attended the vigil, said the event was not supposed to offend woman who have had abortions.

“The objective of the vigil was to pray for those who suffered because of [abortion], and not to reject, to judge people who’ve done it,” Furtado said. “And it really came from, on our part at least…a place of good faith and a place of good willing, not the other way around.”

ALF does plan to follow-up this discussion with upcoming events on campus related to abortion, according to Vice President of ALF Robert Sanchez ‘16. These events are still in the planning stages.

Good for the LDM. Colleges need discourse and conversation. Political or not, LDM appropriately expressed an opinion/feeling about a hot button topic in the U.S. And you know what, praise ALF for countering with their own opinions. Contrasting opinions equals real world experiences and liberal arts. Lafayette needs more of this.