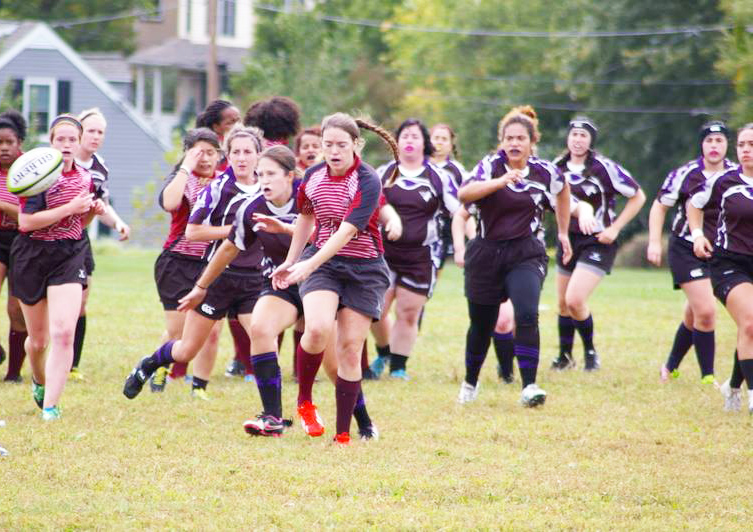 The rugby team looks to score a try. [Photo courtesy of Sadé Evans ‘17.]

The women’s rugby team finished off a successful fall campaign this past weekend, placing second in the Eastern Pennsylvania Rugby Union Playoff tournament.

Prior to the tournament, the team played in two scrimmages and two games. In the first game on Sept. 19, the Leopards beat Susquehanna University and went on to experience similar success against DeSales University.

The success continued in their playoff tournament this past Saturday at Neumann University. After defeating Swarthmore by 22-10, Lafayette faced-off against Susquehanna for a second time this fall. Despite Susquehanna starting the game strong with a vengeance, the Leopards found the victory in shutout fashion, finishing 22-0.

In the tournament’s championship match, the Leopards faced a strong Neumann University team and lost, finishing the tournament in second place.

The team did this despite having only fifteen members last spring, playing most of the games with no substitutes. Following that season, the team’s main goal was to expand the team and get more girls playing.

This fall, the team doubled in size. Now boasting a thirty-player roster, the team’s focus has changed to communication and making an impact.

“[Our goal is] to be the best players we can be,” junior Sadé Evans said.

The increase in team members has done little to hinder or change the team dynamic. Evans, who joined the team last spring, describes the team’s personality as “bubbly,” “outgoing” and “easygoing.” She said the team acts as a “huge family.”

This is especially important in rugby. There are often injuries but the game must continue, and players use their teammates to keep them going through the adversity.

“Rugby is such a hardcore sport that you can’t go in disunited,” Evans said.

Nearly all thirty girls are participating in rugby for the first time at Lafayette. Many come from other sports, such as soccer. Evans played squash in high school and became interested in rugby during her time at the college. The team practices four times a week and plays in games on Saturdays.

The team participates in both a fall and spring season each year, with the latter being the longer of the two. That’s because it usually includes a Sevens tournament, a style of rugby in which seven people are on a team.

Because of a game cancellation, this year’s fall season will be complete after an away tournament the weekend of Nov 21.

The Leopards will be crossing the border and playing in a tournament in Canada. All players with a passport are invited. After this tournament, the season will go into hiatus until the spring season rolls around next semester and the ladies make their way back out to the field as one.