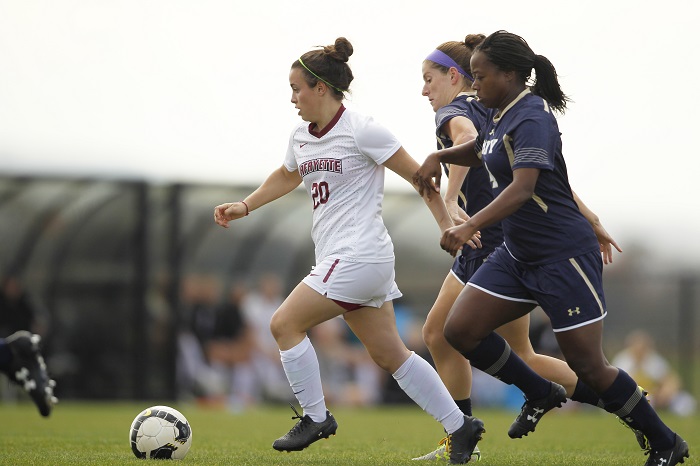 Katie Brannigan ‘19 kicks the ball down the field. [Photo courtesy of Athletics]

This past Sunday marked a momentous occasion for the Women’s Soccer team.  For the first time in four years, Lafayette defeated Navy.

With only 17 minutes left in the game, frustration and nerves gripped head coach Mick Statham and the rest of the team. The game appeared to belong decisively to Lafayette, yet no goal had been recorded.

The possibility of an eighth overtime game this season, as well as a fourth overtime loss was exhausting, especially on senior day.

But then the referee’s whistle blew, and his hand pointed to the penalty spot. The ball had struck a Navy player’s arm in the box, and now it was junior defender and designated penalty-taker Julia Wescott’s chance to step up.

“There was a lot riding on it, and she was smart enough to understand that,” Statham said.  “But I don’t think all of that stuff entered her mind. It was a matter of grabbing the ball and putting it in the net, focusing on the moment and what’s important rather than all the stuff that comes with it.”

Without any hesitation at all, Wescott stepped up and slotted the ball home, delicately combining power and placement to give the goalkeeper no chance at all to make a save.

For senior captain Sam Potoczak, there was never a doubt in her mind that Wescott would make the shot.

“Julia is our designated penalty kick taker, and she practices them all the time,” Potoczak said.  “I kid you not, I’ve never seen her miss. She’s so good at it. Julia is so confident and so good at it that she started walking up to the spot and I was like, ‘We’re good. She’s going to make it, I’m not worried.’”

That was the first and only goal of the game, giving Lafayette a Patriot League victory close to the end of the season and an unforgettable memory for the seniors on the field.

“I think it was [senior captain] Anna [Wissler] that said it,” Potoczak said, “‘When you came in as a freshman, did you ever think that the way you were going to end your home career at Lafayette was to walk out on senior day and lead your team to a 1-0 victory over a team like Navy as a captain?’ If I came in as a freshman and somebody told me that, I would’ve been like ‘You’re crazy. That’s never going to happen.’”

And what an important win it was. The stakes were higher than just redemption—not only was it senior day, with emotions running high, but the win gave the Leopards a shot at making the playoffs and a guaranteed winning season.

Beating Navy allowed the mathematical possibility of the Leopards entering the playoffs, provided that not only do they beat Colgate this coming weekend but also that both Army and Lehigh fail to win in their upcoming matches. But for the players and coach Statham, all energy is only focused on what can be directly controlled.

“If we do get to the playoffs I think we’ll be a tough team to play against,” Statham said. “We’ve got a tough team, tough kids, and they play hard every game. And we got some good momentum so the key thing is beating a program like Colgate—a very good program, we’ve got to focus on them rather than the outside stuff. It really does focus down to beating Colgate and we’ll see what happens from there.”

From Potoczak’s perspective, the team needs to keep on doing what they’ve been doing. There is no shortage of confidence in the locker room, and spirits are higher than ever before.

Lafayette’s game this weekend could prove to be an exciting one with so much at stake.