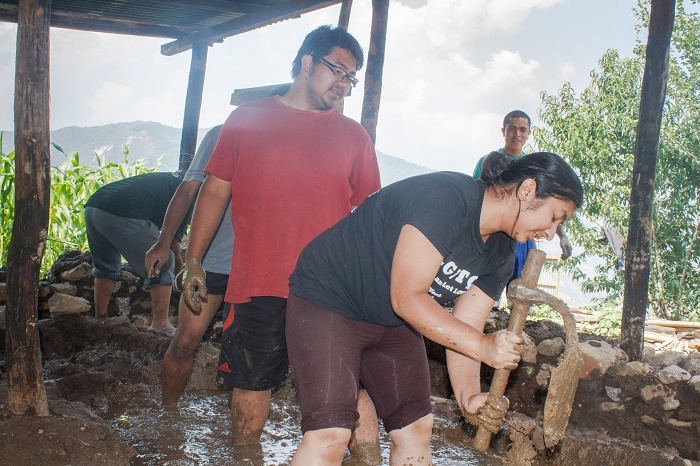 Kelvin Serem ‘17 started a grade school in his village in Kenya.

These three undergraduates chose not to wait until after graduation to make an impact in their home communities. Instead, they have stretched beyond College Hill back to create tangible change from thousands of miles away.

Initially, some said, projects in their native countries were planned for after graduation. But for Serem, who spoke passionately about investing in education in Kenya, there was “no time for waiting.”

Serem came to the United States from Kibargoiyet, Kenya in his sophomore year of high school when he started at Blair Academy. Now he is at Lafayette balancing cross country meets, exams and group work during the school day and managing the Blair-Serem school, which he helped start with one of his teachers at Blair Academy.

The seven-hour time difference between Lafayette and Serem’s village in Kenya means he is often up until 3 a.m. Skyping with his committee to discuss projects for the school.

The same can be said for Niroula, who must navigate the nearly 10-hour time difference to reach her team members weekly in Nepal. Niroula, who always knew that she wanted to return home to work after graduating college, did not initially think she could make a change all the way from Lafayette. But after Nepal faced a devastating earthquake last April, she began fundraising at Lafayette for disaster relief.

Over the summer, Niroula used the money she raised to build four houses for physically and financially challenged individuals in Nepal. Now, she plans to build libraries, which will serve as temporary classrooms for students who lost their schools in the earthquake.

But not every student is building their community through stone. Ramangamihanta, who came to Lafayette through the Lafayette Initiative for Malagasy Education (LIME), not only used funding from Lafayette to renovate a library in her old high school, but also organized a TED Talk in Madagascar for young leaders to share their experiences with other Malagasy youth.

“Madagascar is [one of the] poorest countr[ies] in the world,” Ramangamihanta said. “The politics [are] bad, we have an elected government but we don’t really see how effective it is…we have a lot of pollution, environment problems, we have problems with education.

“We always tell Malagasy youth that they are the future but nobody is training them to be the future leaders,” Ramangamihanta said. “We’re young people and young people should bring change.”

However, bringing about change from halfway across the world is not easy. Along with managing the distance between Lafayette and their home countries, Serem and Niroula both face the additional challenge of navigating infrastructural issues at home. For Serem infrastructure hinders his ability to communicate with his partners while at Lafayette.

For Niroula, infrastructure was an issue while she was in Nepal over the summer.

“There was a water shortage [while building], so you had to walk 15 minutes up a hill to carry water to meet the mud [and stone walls],” Niroula said. “There are little trails and no real road so we had to walk two hours up a hill carrying big logs for the pillars and beams.”

An additional challenge has been convincing others that they could accomplish their goals. However, pushing on despite objections ultimately proved rewarding.

“I don’t think they really believed me at first,” said Niroula. “It’s hard to get people on board because they think I’m too young or I’m just bluffing. But once they actually saw the results, other people were willing to get on board.”

Serem agreed, saying that even his parents questioned why he was building a school when his family lacked basic needs like electricity.

“But after two months, they were like ‘wow,’” Serem said. “’You know, Kelvin, we need this school.’”

But it was never external validation that these students were seeking.

“I know this is what I want to do. It’s my passion,” said Niroula. “It doesn’t really feel like work to me.”

“Sometimes I get tired,” said Ramangamihanta. “But then I just try to remember that this is my end goal. I want to make an impact in my community.”