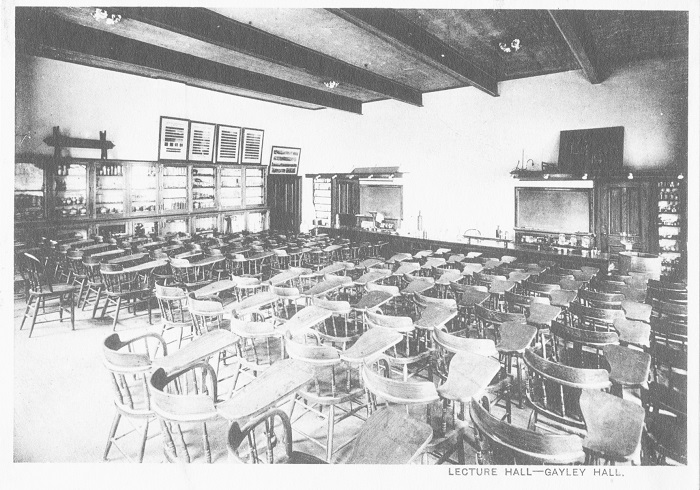 Located on the present site of Skillman Library, Gayley Hall was an instruction building for the chemistry and metallurgy departments. From 1907. [Photo courtesy of Lafayette Archives ]

As the Chemical and Biomolecular Engineering (ChBE) department approaches its 100th year in existence at Lafayette, a series of events seek to commemorate the college’s unique contribution to the nationwide major.

At a lecture on Oct. 19, University of Michigan Professor H. Scott Folger highlighted a particular individual, Chemistry Department Head Edward Hart from 1874 to 1924. Hart helped establish the chemical engineering major at Lafayette, and wrote the first chemical engineering textbook in the United States about century ago in 1921.

In an informational booklet detailing the development of the major at Lafayette, Dean of Curriculum and Resources James K. Ferri linked the start of chemical engineering directly to Hart’s persistence to explore this relatively unknown field at this time in the 1880s.

Chemical engineering was first listed as a major in the Lafayette course catalog for the 1915-1916 academic school year.

In addition to his contributions to the discipline, Hart’s legacy lies with his teaching methods, many of which remain in classes to this day, Anderson said.

“Experiential learning and co-curricular programs is what defines our chemical engineering program today,” Anderson said. “Working one-on-one with students just as Hart did with his chemistry students is quite similar to how faculty works with students today.”

Hart began his own chemical company in 1882 with partner John Townsend Baker that produced refined chemicals. ‘Baker and Hart’ was located a walk away from campus, and students could use the company to become involved in the development of chemical manufacturing.

According to Ferri’s booklet, one of Hart’s students, Richard Kidder Meade, wrote a terse editorial to the journal The Chemical Engineer, demanding the development of an American society of chemical engineers.

Shortly thereafter, the now nationwide organization American Institute of Chemical Engineers (AIChE) began with the help of Meade and other engineers.

The majority of this history was noted in Folger’s lecture, which is apart of a series of events that began last March as a way to commemorate the 100 years of chemical engineering at Lafayette.

President of Lafayette’s AIChE chapter Michael Meshberg ‘16 and Anderson agreed that the centenary has been a chance for students to learn about the history of their majors.

“The celebration has been a fun way to engage the alumni and to excite our students,” Anderson said. “Current students and I alike have learned this history in the past year. Learning where the program started is an important part in better understanding your discipline.”

“I think it’s a great [celebration], because to actually be apart of that is enlightening and an eye-opening experience,” Meshberg said. “I was unaware that many of the roots of chemical engineering and AIChE started.”

The Centennial Celebration began Mar. 27 with the second annual ChBE Spring Symposium and will culminate with a birthday bash for the department, planned for Dec. 4.