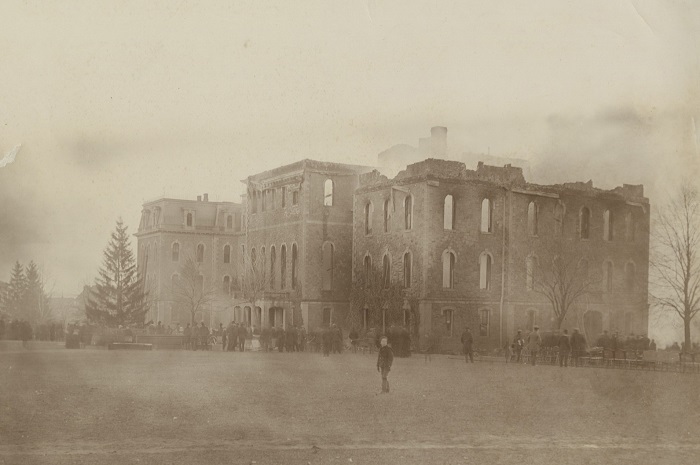 Pardee Hall after it was burned down in 1897. [Photo courtesy of Lafayette Archives]

Lafayette’s campus is filled with ghostly events the week of Halloween. But many students don’t realize that locations throughout Easton may be haunted by more than just costumes and props.

Students only take classes on the first four floors of Pardee Hall, the oldest building on campus. Suspicion has arisen, and rumors about possible ghostly activity on the fifth floor have gained traction over the years. But, to date, there are no confirmations of any ghosts or malevolent spirits.

The spirit said to haunt the fifth floor is professor George Stephens, according to Director for Special Collections & College Archives Diane Shaw. Stephens got the job at Lafayette by lying about his credentials, according to an article in The Morning Call.

Once found out, he was fired, according to Shaw. As an act of vengeance against the school for his termination, Stephens chose to burn down the whole building in 1897. But some say his spirit may have never left.

Although Shaw was unable to confirm ghost activity in Pardee Hall, she did confirm that the cremated bodies of former Professor of Biology Willard L. Wachter and his wife Dorothy Wells Wachter are contained in the walls of Kunkel Hall.

An article from The Lafayette published in 2000 described potential ghost activity in Phi Kappa Psi’s fraternity house. Over 100 years ago, sick people were cared for in the Phi Psi house, and, according to legend, the ghost of one of the men who died in the house still lingers. But many of the current brothers of Phi Psi are unfamiliar with this story, and have reported no ghost activity of any kind.

Although ghost sightings on College Hill have been minimal in recent years, ghost stories are a major part of the City of Easton’s culture. It is believed that J. Fred haunts Easton’s State Theater, according to the State Theater’s website. This is a “celebrated ghost story,” said Shaw.

According to the State Theater’s website, Fred lived in the theater for many weeks after flooding in his own home. Legend has it that his presence never left, and nearly eleven sightings of Fred have been reported, according to the website.

The Easton Public Library has also contained some mystery after it was rebuilt on top of a graveyard. In the process of the reconstruction, 514 graves were disturbed, according to a group that calls itself Tri-County Paranormal’s website.

These paranormal enthusiasts believe that the souls of those misplaced bodies haunt the library in retribution for these disturbed graves. In particular, there have been sightings of Elizabeth Bell “Mammy Morgan,” whose body was reburied with a marker on the library ground, according to the website.

There may not be sufficient evidence to persuade skeptics of these tales, but the potential of spooky spirits lurking around Easton should be enough to make a student just a little more cautious as they visit these sights on Halloween night.