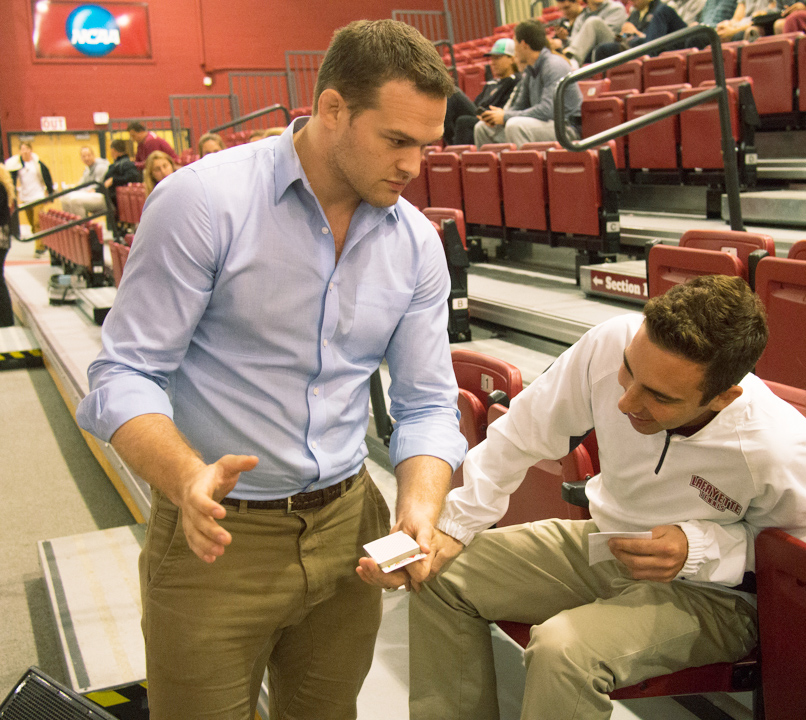 Accompanied by the only openly gay athlete at the college, former Division I wrestler and LGBT activist, Hudson Taylor, challenged the Lafayette community to choose inclusiveness when dealing with others’ sexuality and gender identity.

Taylor spoke out this past Monday as part of the athletic program’s recently established “Respect Initiative.”

“We have a choice of how we speak to and about one another,” Taylor said, “and we can choose to be kinder to one another in the language that we use.”

As the founder and executive director of Athlete Ally, a non-profit dedicated to fostering inclusive sports communities, Taylor spent his visit engaging students, faculty and administrators in his campaign to end gender and identity discrimination in athletic environments.

“The department is kind of silent about this issue,” said Lawrence, a former division one college basketball player at Dartmouth. “When you’re a gay student athlete, you don’t really know who your allies are. It would be good if the athletics department could clearly articulate that they’re more welcoming.”

In his keynote presentation, Taylor, who is straight, addressed his personal experience with these issues while wrestling for the University of Maryland and the different ways he has been combating the problem following his athletic career. After a student came out in the middle of class while he was in college, Taylor said he began to rethink how the term “gay” is used in locker rooms and sports.

“It was cool to see someone in such a stereotypically manly sport speaking out,” sophomore fencer Andie Mitchell said. “There’s probably less acceptance in that community, so it took a lot for him to oppose the culture around him.”

According to Taylor, the gendered language surrounding athletics remains the biggest issue at hand. He targeted phrases such as, “That’s so gay,” as having negative impacts.

“No one wants to insult or harm anyone, but they make comments…as a joke, off-hand,” added sophomore lacrosse player Dana Smith. “It’s important to know that your comments could hurt someone even though you could mean it as something light-hearted.”

To add to his presentation, Taylor invited Gavin Studner, an openly gay athlete at Lafayette, to join him on stage.

“Having Gavin on the panel, having an out athlete share a little about his story and experience also gives this conversation a personal context,” Taylor said. “It’s one thing to talk about these things in theory, but when you have someone who’s a member of your community, who’s sharing their experiences and what they’ve had to go through…I think that roots the conversation in a reality that’s really important to talk about.”

Studner’s main goal of his speech was to illustrate his past complications and current situation.

“As far as I know, and we know, I’m the openly gay athlete at Lafayette,” said Studner, a senior on the tennis team.

He feels that his involvement in college athletics has been a positive experience, especially compared to high school.

“The environment here is a lot more understanding and I think that’s because people are less judgmental,” Studner said. “Lafayette does a great job creating an environment that is safe and inclusive of everyone.”

Despite Studner’s positive attitude, both he and Taylor recognize the need for change.

According to Studner, during the presentation Taylor asked the audience to raise their hands if they had heard the phrases, “that’s gay,” or “you’re being gay” in the last week.

“I saw about 70 percent of the crowd’s hands go up,” Studner said.

Taylor followed by asking if anyone with their hands raised had spoke out in these instances. Everyone’s hands lowered, according to Studner.

“I think that they fact that there is only one student athlete at Lafayette who’s out is suggestive that the environment is not what it could be,” Taylor said. “So what can we do as a sports culture, as a campus environment to help athletes who are in Gavin’s position?”

Taylor worked with coaches, leaders in the student-athlete community, administrators and members of QUEST to address this question. According to Taylor, being educated, vocal online and wearing your beliefs on your sleeve—in a literal sense, are small, but necessary steps towards achieving a safe environment.

“A lot of times when we talk about various social justice issues, there is a very all or nothing mentality…” Taylor said. “You’re either with us or you’re against us, and while I’d love everyone to be as passionate about LGBTQ equality as I am, the reality is that won’t be the case. And so rather than focusing on large scale change, if we just boil it down to simple steps that will get us going in the right direction, we will make large scale change in a shorter amount of time.”

Taylor’s presentation, coupled with the recent release of “You Can Play,” an athletic communications video dedicated to showing support for LGBTQ athletes at Lafayette, demonstrates McCutcheon and Lafayette Athletics’ strong support of this movement.

“There’s a tremendous amount of forward momentum, and I’m excited to see what comes next,” Taylor said. “Speaking out and standing up takes two seconds and it could save or change someone’s life.”

Despite this momentum, Taylor emphasizes the need for continued action.

“Success is contingent upon what happens next,” Taylor said. “We all have people come in and talk about various topic matters, but if nothing changes, then that time spent it time wasted.”

“Expect change to come soon,” Studner added. “Sooner rather than later, because my goal is to make change before I leave this campus.”