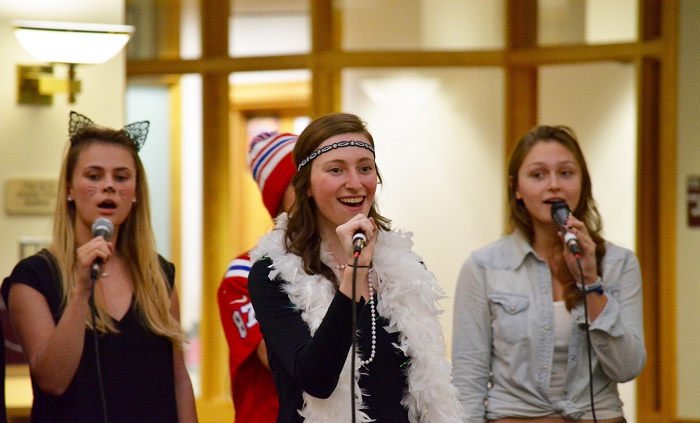 Members of Cadence perform their repetoire. [Photo by Courtney DeVita ‘19]

Ranging from “Hocus Pocus” to Ed Sheeran all the way to “Pitch Perfect 2,” Cadence’s Halloween Concert featuring Soulfege provided an enjoyable time for everyone who attended, providing some fall fun the week leading up to Halloween.

On Monday, Lafayette’s female a cappella group, Cadence, had its annual Halloween Concert in the Farinon Atrium.

Lafayette’s co-ed a cappella group, Soulfege, opened the performance with two different songs, one being a cover of Ed Sheeran’s “Give Me Love.” Their cover of Sheeran’s ballad was hauntingly beautiful, and it left me wanting to hear much more once it had ended.

Cadence took the limelight after Soulfege finished the Sheeran cover, with each member dressed in a different Halloween costume, prepared to begin their set. Opening with “Blackbird,” Cadence showed off their wide ranges of excellent voices. After, they sang Jeff Buckley’s “Hallelujah”. This performance was so powerful that Alienor d’Arenberg ‘18 noted that the “Harmonies were so beautiful that they gave me chills.”

Cadence even gave a nod to the cult classic a cappella movie sequel, “Pitch Perfect 2,” by singing the song “Flashlight,” originally performed by Jessie J. This cover was able to put a smile on many faces, since it was in the popular film released over the summer.

The performance included some Halloween-themed songs as well, most notably “I Put a Spell On You,” which a great number of people may know from the movie “Hocus Pocus.” This movie is an essential for Halloween, and Cadence paid homage to it in the best way possible. This was the final song of the performance, ending the concert on a high note that left everyone ready for Halloween this weekend.

Cadence and Soulfege did not disappoint in this Halloween concert.