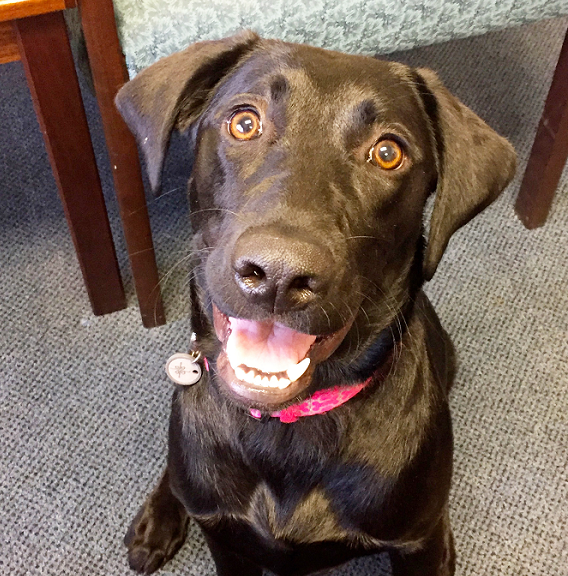 Raven the Health Center dog smiles for the camera. [Photo by Margie Lewis ‘19]

There is a new staff member at Bailey Health Center and her popularity is rising—but there’s something about her you might not expect.

She’s a seven-month old black lab named Raven and her job is to provide a morale boost for students who are sick or stressed on campus.

Students can come to the health center free of charge and without appointment to play with Raven. They also have the option of taking her on walks around campus. Nina Cadwell ‘17 is one of the students who takes Raven out often.

“It has gotten to the point where I feel like I have partial ownership,” Cadwell said. “She’s become a companion for me. Raven is pretty much my dog. I love it. It is one of the greatest feelings when she recognizes you before you take her for a walk.”

Raven was brought to Lafayette this summer by her owner Jodi Schluter, a physician assistant at Bailey Health Center.

“The idea came about in the summer [when] we were trying to see how we can boost morale for kids who were coming in sick and not feeling well,” Schluter said. “I was getting a dog myself, for my family at home, so we [the staff] figured I would try her out over the summer and bring her into the health center and get her used to the area.”

“One of my favorite things to do, instead of dragging myself to the gym, I take Raven on a run through the arts trail, I feel comfortable enough to take Raven off the leash,” Cadwell said. “I take her out everyday at 11. Jodi has never given me a time limit, it’s great.”

While Raven was just brought in this summer, the idea of having a designated dog at the health center has been in talks since last year, said Director of Health Services at Lafayette Dr. Jeffrey Goldstein.

“One of the things we had talked about was enhancing the health center, not only in ways to add access, but also doing a bunch of things that make students feel more welcomed,” Goldstein said.

“I am a dog lover, and I think a large percentage of the human body loves dogs,” said Goldstein, who recently lost a 13-year-old golden retriever of his own. The decision to bring Raven to campus is not only about a love of dogs, but is grounded in scientific research, according to Goldstein.

“There’s some evidence based research in medicine that will tell you that having a dog to pet and bond with is a significant thing in reducing stress and making students feel better,” Goldstein said.

Whether the scientific research is proof or not, some students seem to feel the positive results.

“I think it’s one of the greatest ideas the college could have done,” Cadwell said. “Most people like to walk dogs in nice weather because it just makes them feel good.”

According to Goldstein, the future of the program includes using dog therapy to make the health center a warmer, more welcoming place for students.

“We would like days set aside where we have lots of dogs outside the health center where students may come and relieve stress,” Goldstein said.

Goldstein also hopes to add another staff member—a golden retriever puppy by the name of Munson—to the program next semester.

Lafayette College is not the only college that has a dog presence on campus. Schools like Moravian College have days set aside for dogs to come to campus. However, having a staff member who is a dog is not as common, Goldstein said.

View all posts by Marjorie Lewis →

Where was this when I was a student!!!

I think it’s great that you are focusing not just on preventing illness at the Bailey Centre, but on improving over all health and morale of the students. Good initiative.