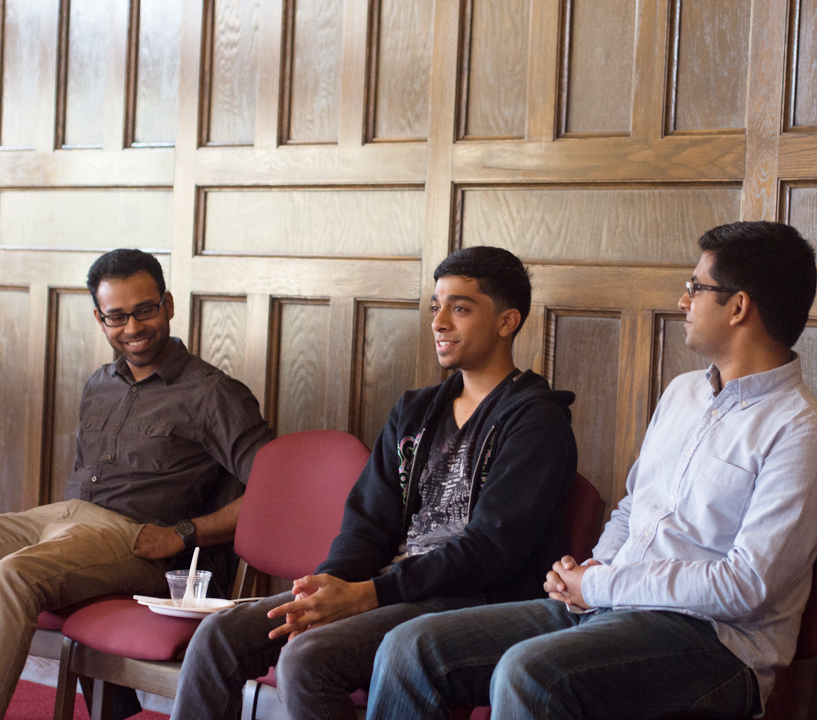 Riyaaz Qawwali at a lunchtime discussion. [Photo by Willem Ytsma ‘16]

The Austin, TX-based group Riyaaz Qawwali visited Lafayette and hosted a discussion Tuesday on the art form behind Qawwali music.

The group represents a variety of nations and faith backgrounds from South Asia. Together, they play a traditional form of Islamic music known as Qawwali.

Members of the ensemble have backgrounds in both Eastern and Western classical music. They have performed professionally for nine years. Together, they combine poetry from South Asian writers, such as Amir Khusrow and Mir Taqi Mir to the sounds of Qawwali music.

Each of the musicians within the group has a unique background of involvement with the music. Some of the artists grew up listening to the art form, while others did not become exposed to it until college.

“I don’t know what made me listen to Qawwali,” said director of the group Sonny Mehta, “but it pulled me.”

Each member of the ensemble—consisting of two percussionists, two harmonium players and four vocalists—agreed with Mehta’s message. Although every musician experienced a distinct draw to Qawwali, the group converged on the ideology of music as a form of religion.

When discussing the specifics of inspiration for their music, the men said how they used their art as a way of moving cultural conversations forward.

“Where you come from shouldn’t affect the meaning of your message,” Mehta said.

The precise message that the ensemble preaches is one of love and harmony: an interfaith approach rooted in tradition and valued across all religions. In this light, the group not only bonds to make impactful music, but also draw connections to their audience.

“Part of the musicians’ message borders beyond their background,” student Abdu Manan ‘18 said. “They address their culture, but move their message forward through poetry, connecting it with the aesthetics of rhythm and tone.”

Students such as Manan were especially appreciative of the college’s effort to bring interfaith understanding and cooperation to the campus, sponsored by the initiative “Better Together: Cur Non?”

The goal of this initiative is to ensure that religious pluralism and respect exist within our society.

“I especially appreciate this initiative,” Manan said, “as it is imperative that our students be exposed to art forms such as these.”