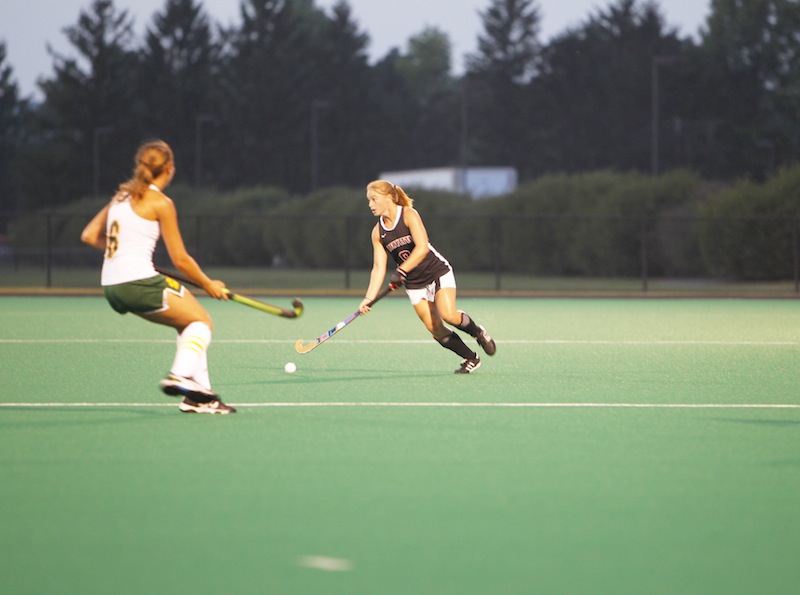 This week The Lafayette takes a timeout with junior midfielder Ami Turner who helped carry the Leopards over Lehigh in their 2-1 win last week.

Rachel Robertson: You scored game winning goal against Lehigh. What was that like?

Ami Turner: Going into that game we knew Lehigh was better than previous years and we beat them every year but from their previous games we knew they were a much better team. We had to go out hard. We had scored and they had scored and it was a tie game. In the second game I got a foot in the corner. I kept playing and shot it and the goalie missed it. It was pretty exciting, but then we had to hold our lead for the last 15 minutes.

RR: What did it feel like to be the hero for the game?

AT: We usually beat them so it’s not the biggest of rivalries but it still means a lot. We’ve beat them for ten years so it’s a big game to win. We cut it close but we did the job.

RR: How is the field hockey season going?

AT: We started off strong. Our goal is to have winning season. Right now we’re 6-6 so we’re even. Basically we’re focusing on our conference games and we have the Bucknell game on Saturday so that’s a huge game.  We’ve had a rough few losses but we’re working on it.

RR: You’ve played some tough teams like UConn who was number one in the country. Going into those games is your preparation or mindset any different?

AT: We had a weekend where we played BU who was number one in the Patriot League and then UConn the next day. That was an interesting weekend. Especially for UConn, those are the fun games, they’re supposed to be fun where we just go out and play, you don’t have to worry about doing this or that. You follow the game plan and play. But this year we didn’t play our best game so that kind of sucked. We have nothing to lose in those games so it’s do your role and try new things.

RR: You started every game last year, how has your Junior season been different from past ones?

AT: Last year I was a side mid and this year I came in as a center mid. Throughout the spring I worked on playing center mid, and over the summer I trained at home with a really good academy.

RR: You mentioned Bucknell, but are there any other teams to look out for?

AT: Last year we didn’t make the tournament because we lost to Colgate, which should have been a win. So this year for Colgate we’re coming out hard and we need to win. We’re focusing on not making another team a Colgate team. Obviously, we want to win against American and Bucknell. We’re taking each game one at a time.

RR: What are your goals for the rest of the season?

AT: We’re taking one game at a time and wanting to win them. We want to make the Patriot League Tournament and if we get there we’d like to win. Another goal is a winning season. We have DPC [Defensive Penalty Corners] and APC [Attack Penalty Corners] percentage goals that we want to improve.

RR: Do you have any pregame rituals?

AT: I put my mouth guard in the same shin guard every day, so it stays in my right shin guard. It never goes in my left. If it’s in my left there’s an issue. And I always put my right on before my left.

RR: Do you play any other sports?

AT: In high school I played basketball and rugby. I did track and field as well. Basketball was my favorite. All my friends were on the team— it was fun but we were kind of really bad.

AT: Well, I’ve played field hockey since I was in grade two when I moved to Canada. Then I just played all my life and in grade 10 I kind of got serious and went on traveling teams to the U.S. I was recruited and it was just a good opportunity to go to school here and play.

AT: I guess Provincials in my grade 12 year. By BC team, we were tied and then we went into overtime. Then we went into a shootout and won, and I scored one of the shootouts.

AT: I would say Terry Fox [an amputee who ran across Canada] was an idol growing up.

AT: I enjoyed macro[economics] with Professor Olena Ogrokhina. I really liked my FYS professor Chawne Kimber too.

AT: My assistant coach always says “just get after it.”

AT: Last spring I had half my ear cut off in practice. I had to have plastic surgery to sew it back up. Also, I was born in South Africa.

That is not a picture of Ami Turner. It is Aliza Furneaux one of our fine defenders. Ami Turner is number 8 and is a great asset to our team and seems to get better every game. I felt strongly she should have been one of the PL players of the week. Instead the League picks a Lehigh player….the losing goalie!! Big game this weekend against Bucknell and I am sure Ami will play a key role in our win. Go Pards!!!!

Thank you for correcting the picture. Big game for the field hockey leopards today at Amercian…..go Lafayette !!!