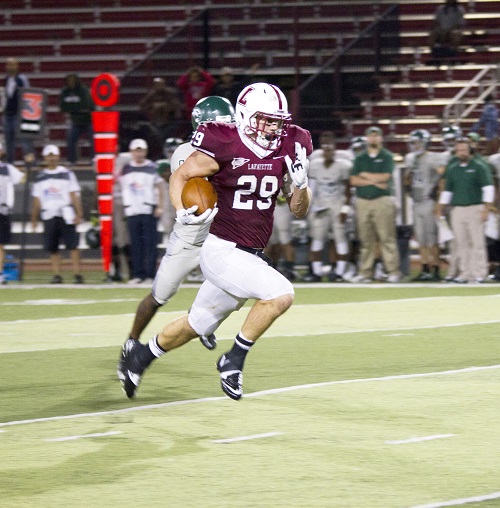 Ross Scheuerman ‘15 carries the ball down the fi eld. [Photo by Hana Isihara ‘17]

Ross Scheuerman ‘15 circa 2014 was nearing the end of a decorated collegiate football career that looked to be the spring board to a potential NFL chance. His performance in the 2014 season earned him a spot on the All-Patriot League Team and cemented his position on Lafayette’s list of career rushers.

His dominance and a senior-laden offensive line helped a Leopard squad that had continuous QB questions with an injury-filled season at that position. Scheuerman through the first five games of the season was responsible for 32 percent of Lafayette total offensive yards.

Those that had to follow in his rushing routes had a nearly impossible task: replacing Scheuerman. To date, their production has not come close. Through the first five games of the season, Scheuerman was averaging more yards per game than two of Lafayette’s leading running backs this year had in total.

The Leopards have been plagued by inconsistent offensive play this year against teams that seem to have all the answers for a Lafayette defense that is spending too much time on the field. Lafayette’s run game has been a notable deficiency for the team since the departure of Ross Scheuerman to graduation and the NFL.

Averaging just 64.4 rushing yards per game and scoring only two rushing touchdowns on the year, the Leopards have not found away to make up ground on Scheuerman’s offensive production that placed him on the 2014 All-Patriot League team and third on Lafayette’s list of career rushers.

A young and inexperienced O-line hasn’t helped matters for the rushing corps and the Leopards instead have turned to their passing game. Logging 242.2 passing yards per game, the team has relied on the arm of junior Drew Reed and the hands of sophomores Matt Mrazek and Rocco Palumbo, as well as freshmen Joey Chenoweth to bolster their offensive production.