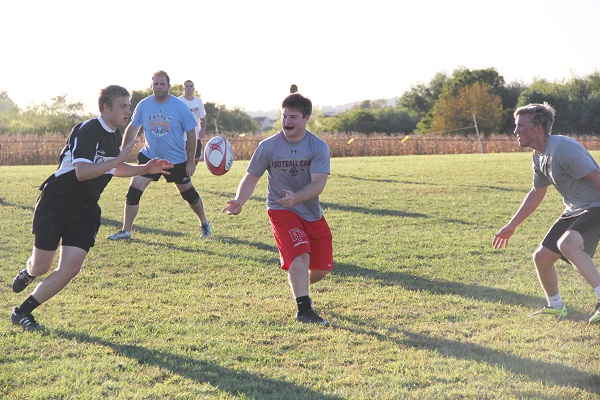 With most of the fall sport teams having great success in their respective seasons, it was fitting that rugby wanted to get in on the action. And with a 76-0 triumph over DeSales University this past Saturday, they definitely made their presence known.

In the past seven years since head coach Daniel Benedict assumed the role, this is the most the Leopards have scored in game. With the win, the team moved to a perfect 3-0 on the year.

Senior Chris Nelsen, captain of the team, believes that the huge win was based not just purely on the gameplay, but rather in the trust and chemistry the team has with one another.

“Our most recent win against DeSales University was a great showcase of the growth our team has seen these past few years,” Nelsen said. “Our comfort and familiarity with each other on the pitch allowed us to take risks in the open field and support each other on defense.”

As far as gameplay goes, much of the success can be attributed to junior John Walker and sophomore Russell Tanaka, who five and three tries, respectively. In addition, Nelsen converted eight out of twelve kicks.

Other key players for the Leopards include senior Colton Mitchell and freshman Dan Quinn. Mitchell, who has garnered the nickname, “Mr. Stitches,” due to the fact that he puts his body on the line every single play, brings an obvious physical aspect to the team. Quinn is a new face, but brings a lot with him. He has previous experience participating in Gaelic football, which is essentially a less structured form of rugby.

Although the team has strong personnel spread throughout the field, one of their strengths arises through what some may call a weakness.

“We are very strong in all positions; in the forwards and the backs,” Nelsen said. “Because our players are generally physically smaller than players throughout our division, our fast backs are our biggest strength and we capitalize with them. We have developed our field awareness and influenced our play style allowing us to exploit weaknesses in our opponents defense.”

The success the rugby team is experiencing today can be accredited to the players, but even a greater amount can be attributed to the coaching staff.

“The size and depth of our team has kept us competitive internally for positions on the starting side with new players constantly pushing for a starting spot. Without the 30-plus players that come to practice every week, we would not be where we are today,” Nelsen said. “But much of the growth and success I have seen can be credited to our coaches, Benny [Benedict] and John, who put in twice as much effort as any player.”

Coach Benedict came to Lafayette during a rough time for the rugby team. Without a coaching staff or any structure, the team was essentially a disjointed mess. Since assuming the role as head coach in 2008, Benedict has turned the program completely around and has built it into one of the strongest in the area, exemplified by their qualification for Nationals just last year. This year, however, they have their sights set on a new goal.

“Our number one goal this semester is to win the EPRU (Eastern Pennsylvania Rugby Union) Men’s College Championship,” Nelsen said. “Based on the current standings, we will be competing against Susquehanna University, a team that has won two years in a row and has demolished their half of the division so far this season.”

With an EPRU championship, the Leopards will have knocked off another item on their list many thought would be impossible just a decade ago.